Anything to keep from writing. 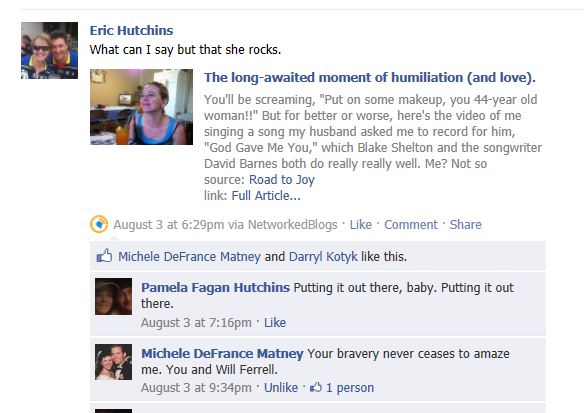 Some of y’all have noticed that I have not actually written anything on my blog this summer.  Well, I haven’t written anything else either, unless you count the two novels’ worth of business writing I’ve done for cashola, when I’d planned to write two real novels instead.  The reason I know some of you have noticed is because I’ve gotten (many) tweets and emails gently encouraging/scolding me.

I know writers write, I know I am a writer, even if I am a writer who hasn’t written in three months.  I have a schedule and big dreams, but they’re on hold while I take care of life.  Eric and I haven’t even danced the cha cha or played music in two months, either.

So, why do I keep posting to this silly blog, if I’m not writing?  Why do I post pictures and — worse — crappy videos?  Why don’t I just let my poor readers have the same break as me?

Because creating these posts — creating anything — drives me to write.

Stay with me here, because I have to go back to the beginning of it all for this to make sense:  allowing others to read my words renders me exposed in a way I have never experienced before.  Putting those words down on paper/screen causes me to dig deep for creativity and COURAGE.

Now, most people that know me only know the outwardly fearless side.  The confident woman.  The woman who stands toe to toe with anyone and doesn’t flinch, except when it suits her.

Well, she’s just a cardboard character.  The real me, the me inside, is always scared of failing.  This me hates “putting it out there.”  The girl I’m talking about wants to stay in bed, silent, in the fetal position.  She needs a hug.  She wants to “scratch” from the triathlon she signed up for.  She wants to print off sheet music but not play the song for anyone.

She gets really comfortable NOT writing.  It’s safer than exposing hopes, dreams, failures, limitations, and fallibility.  She likes to wrap her excuses around her like a fuzzy blue blanket, with hot milk and chocolate chip cookies in hand.

But everytime I click “publish” and send my blogs out there, I am forcing myself to remain accountable to the writer in me.  “You can’t hide forever, Pamela,” I hear, as the words “post published” appear on my screen.  “Hiatus cannot become ‘quit’.”

Last week I upped the ante.  I video’ed myself sans makeup, hairdo, and good outfit, singing and playing the piano.   This was it:

The response was huge from the other side of the mirror.  My readers woke up.  Some of you asked me, “How do you have the courage to put something like that up?”

Leaving aside what that says about the quality of the playing, singing, and production (yes, I know the piano was too loud), it is important to me to answer that question.  Where does that courage come from, if I am the scared girl inside?

First, it comes from the safety of not seeing your faces and the comfort of “not trying.”  If I had dolled up, gargled salt water, and cleaned up my step-daughter’s “going to college” pile of crap behind me, I would have felt a need to be brilliant.   Instead, I could just do it, tongue in cheek, and cower behind a URL.

Second, and more importantly, it comes from knowing how much easier it is to video myself singing than it is to write.  That whole exercise, all four “takes,” took only twenty minutes.  A blog post like you are reading now?  An hour.  Or two.  Or more.  And I feel much more exposed showing my writing than I do letting people watch the silly video.

Third, and most critically, creative expression of any kind keeps my embers burning.   Publishing that expression and receiving feedback stokes the fire.  That act coupled with the feedback could could result in actual flame.

And, my friends, that is exactly what happened.

I received a lot of surprising and sweet messages.  I didn’t get any haters, which shocked me; I just keep waiting to open my youtube channel and see someone making fun of me.  So far so good.  I had many people tell me that my video made them cry.  That was very nice.  Y’all know how I feel about praise, though.  But the comment that cattle prodded me into typing this blog (which counts as writing, by the way), was this one: 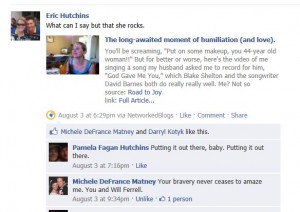 "Your bravery never ceases to amaze me. You and Will Ferrell."

Now, I could have taken that the wrong way, comparing my video warbling to the comedy of the man that gave us Talladega Nights.  Instead, I took it this way: Will Ferrell does truly embody “putting it out there,” and sometimes when he puts it out there he is a comedic genius and sometimes he is an epic fail.  And he keeps on and keeps on and keeps on doing it, because that is who he is.

A writer is who I am.

I needed some stimuli.  I fished for it.  I got it.  And it makes me remember that I am brave, that I am not just the scared, tired girl full of excuses, that I am a writer on a journey, and I won’t get there if I hide under the covers.  I have to keep moving forward, in whatever way I can, big steps, baby steps, or crawling on my bloody knees.

Today, think of this as baby steps.

p.s.  Conceding Grace is still with two agents, one of whom is “seriously considering” it.  And, it’s been with both of them for 2.5 months.   At some point, no answer is an answer, I’m just not sure if we’re there yet.  If I could finish the division of Leaving Annalise into its two book format, and finish book four, then I’d consider, like some of my really talented author friends, going the e-book route.  E-publishing is really starting to mushroom.  And, I won’t do it until I have a mini-library to put out there, so don’t look for it to happen tomorrow.  Meanwhile, we await feedback from these two agents.