In search of Pat Conroy.

Eric and I had a lovely 48-hour vacation worshiping Pat Conroy and the Low Country while on break from my book tour, thank you very much. And during, for my next two events. But come with me now, let’s start at the beginning.

We drove southeast from the drowned environs of Raleigh through pouring rain, passing car after truck after overturned semi swamped offroad as we went. It was disconcerting, disturbing even, as more than once the Bookmobile caught just enough wind to necessitate a forceful correction, just the type of move that could start a dangerous skid, especially when all of us on Interstate 95 were a sneeze away from hydroplaning anyway. Just as we entered South Carolina, a small but violent cell swept in off the coast. I grew up in tornado alley, and I knew twister weather when it came upon me.

As soon as we entered the wall of black clouds, the wind went nuclear, blowing the rain straight sideways and us too. Traffic slowed to the crawl of a grandmotherly turtle, hunched into the wind propped up by the wooden cane in her aged hand, with fingers not unlike the shape and color of fine ginger root, and people pulled to a stop under the seeming safety of overpasses. Honestly, it was not much different than the daily weather I’d faced for the last three weeks, but I don’t mean to suggest it wasn’t scary, because it was scary, very scary. We later learned two waterspouts between Fripp and Hunting Island had spun water into silver between sky and ocean before spitting themselves out on the sands of Hunting’s shore.

“Wait!” my mind screamed. “Back you beast named weather. MY HERO PAT CONROY LIVES ON FRIPP ISLAND.” How close capricious Mother Nature was to ripping him cruelly away before I could even get there.

We evaded ditches and certain death to arrive at our (closer to Pat Conroy) Low Country KOA in (still) pouring rain, and spent our first night in (more) pouring rain. After three straight weeks sealed in a rain and wind buffeted sardine can on wheels in suspended humidity with damp-sticky sheets, panties, and paper towels, not to mention dog, I had a teensy tinsy downward swing in my mood pendulum that night, one that did not swing back, and the weight pulled me into a place of despair. I pleaded with Eric to take me to a hotel.

Eric doesn’t always use the common sense his God — the God who watched over little Caribbean boys in their beds during the long silky nights as the seas kissed St. Croix’s shores — gave to him, but that night he said all the right things, at this, the right moment. A hotel. A hotel for a West Texas princess, with a king-sized iron bed with strong, tall posts, posts capable of withstanding the worst winds South Carolina could hurl at it. Wherever I wanted. Here, Paris, Cape Horn, the Taj Mahal, all mine but for the asking. For as long as I wanted, because he would give me the end of time in a ship-bearing bottle if that is what I needed. With a stately bath tub, claw-footed and bubble-jetted, filled with endless hot water. Central air conditioning, even a dehumidifier if necessary, because he understood the wounds this ordeal carved into me, he would bear them for me if he could. At least he would at first light, because, despite the purity of his intentions — purity like the white sand beaches of his youth at sunrise, before a living soul had left a mark upon it — this was not something one man could conveniently deliver unto his slightly hysterical beloved at two a.m. in the near-swamp of Point South, South Carolina.

But such fits in the dankest hours of the migraine-ridden, back spasmed, ink-blotched night I would do best to put aside, even while marooned in a moat of a temporary nature, when morning breaks with patches of (brief) sunlight, finding me one leg flung out from under the covers on a mis-sized mattress in a 24-foot Class C Motorhome only this far from Conroy’s adopted hometown of Beaufort, SC. Only this far. This far.

I hadn’t come this far to abandon my spiritual writer’s quest. It’s not that I had changed my mind about the desirability, the very necessity of a hotel stay. I had just summoned an inner strength, fueled by the tantalizing proximity of the author of The Great Santini and its sublime siblings Prince of Tides and Lords of Discipline, to drug up and put a cork in it, because before me wobbled a trembling new day on knobby-kneed legs, enticing me outside through the (now intermittent) rain toward the possibility that I might place my unworthy feet in the hollows left behind by my hero’s steps. Better yet that in haunting his haunts, I might run across the legendary wordsmith himself, as happened to a writer friend of mine stalking paying homage to his own literary idol at a youth hostel in Austria. Ah, but that is a story for him to tell, or for me to steal, for another day.

Armed with my brand-new Pat Conroy Cookbook and aided by the fact that I had memorized his previous eight books, the uncondensed versions, in their full magnificence, each word a crystalline shaped tear sparkling in my minds’ eye, I would sally forth.

I’m doing my damnedest to Conroy and my fingers are tired and I haven’t even gotten out of the RV on the first day of this story yet!!! I can’t do it. I am not worthy. Deep breath, all the way in. Long exhale, ten seconds, slowly, feeling myself return to me-ness with each count.

That’s more like it. Just imagine if I’d gone on a Larry McMurtry quest. Whoa. I’d have really wigged out.

Ahhhhh. Better. So where were we? Ugly mood swing, woke up, decided to stalk Conroy before dealing with the hotel issue?

Yeah, well, I downed a handful of pills like the good little drugstore cowgirl I am and grabbed my tourist trap map.

“Must continue quest,” I mumbled to Eric. “Must not waste a moment. Only 36 hours left.”

“You’re sure you’re OK?” He had earned the right to be doubtful if not fearful in the wake of one of my storms.

“I think so. Maybe. I mean I will be. Just need to get rolling.” Petey cocked his head to the side and whined. “S’OK, boy, s’OK.” I tried to pat his head and only missed by an inch. My pain hadn’t fully subsided, but obviously the pills were onboard.

Eric steered the Bookmobile carefully over the mud that used to be roads through the KOA. The patches of sun disappeared and the rain intensified.

I was reaching the point of semi-pleasant numbness. I leaned over the great divide between driver and passenger seat and patted Eric’s knee, with more success than I had the dog’s head. “No matter what, we’re here, I don’t have to work, and we’re together. That’s all I need.”

“Except to find Pat Conroy.”

“Take me to Fripp Island, baby” I said.

“Do you want to do anything else first?”

“Nothing. Full speed ahead to Fripp.”

We drove through Beaufort, and I kept up a steady patter of Conroy trivia. “He moved here when he was 15. He lived in 24 places as a kid. He adopted Beaufort in high school. All his books are anchored here, or near here.”

We crossed from Port Royal to St. Helena island. On to Hunting. Across the bridge, and we were there. Fripp. Fripp Island. But wait — there was a toll booth or something to clear first. We pulled to a stop.

“We’re here to see Pat Conroy,” I added, but Eric lurched between the attendant and me, blocking the sound of my voice.

“This is a private island, sir. You can turn around right here,” he said, pointing in front of the small guard house, because that is what it was, a security guard house.

I bit my lip. I knew we were parked now in a spot his car had crossed many times, with a wave and a nod, maybe even a salute from the friendly fellow now stomping on my dreams. Could we make a run for it? I ran my hand across the cover of The Pat Conroy Cookbook. I had come this far. The guard didn’t look too ferocious. We could take him in a foot race. But no, we could hardly blend in the Bookmobile. I met eyes with Eric and dipped my head in the smallest of nods.

A brilliant sun, the first I’d seen in a month, broke through the clouds over Hunting Island. An omen. I had come close enough, and all would be well. I pointed. “The beach!”

And so it was that we spent one glorious hour in precious sunshine on Hunting Island Beach, only 150 yards of water separating us from Conroy’s Fripp, before the rain started again. By the next day, I’d eaten my body weight in shrimp and grits, and we were killing it at a Barnes and Noble in Charleston/Mount Pleasant, a city we absolutely must visit properly someday. Twenty-four hours after that, we had our biggest night of the tour so far in Savannah, and stuck around to enjoy the city.

I am pretty sure that it was all because of Pat Conroy. 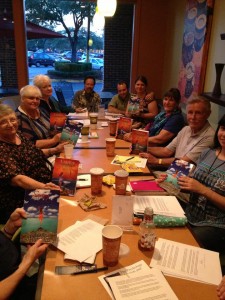