Creature from the Black Lagoon

Just when I thought I knew who I was as an athlete – a very slow distance trail runner – my foot announced that I was mistaken.  Every specialist I have spoken to, including my wunderbar husband, concludes that the sport for me now is swimming.

This is the year you become the fastest swimmer you have ever been,” my orthopedist told me, as if I would share his excitement.

The one thing I have always known I am not is a swimmer.  My daughter and two step-daughters are swimmers; they are elite swimmers in fact and spend hours a day in the pool.  My husband is a swimmer who absolutely loves to swim.  I swim as a means to an end; one cannot triathlon without completing the swim portion of the race.  Even then I approach swimming as a “just the minimum, just in time” element of my training.

If you just didn’t have to get wet and wear a bathing suit, swimming would be fine.  No, that’s a lie.  I also don’t like getting water in my ears, I hate being cold, and I abhor the smell of chlorine that just won’t come out of my pores with one shower.

My long-suffering husband has worked hard to resolve my issues.  I now have a swiMP3 to listen to audio through my cheekbones so I can still wear my wax ear plugs, and he has given me a full length swim skin to keep me warm and out of a swimsuit.  I look like the biggest dork ever in it.  A new thing to hate.

But I can’t run or do other foot-load-bearing athletics.  The downward heel position of bicycling becomes too much after a few hours.  I must swim.

This happens to everyone.  You must give up one thing you love for something you don’t:  Maybe your spouse has handed you divorce papers, or your boss had given you a pink slip.  Time to “swim.”  Quit whining, Pamela.

So, as I force myself to endure my personal discomfort zone of swimming, I decided to share this old blog with you all (and myself).  It puts things into perspective.  I used to hate swimming even more!  I overcame fear and loathing, and I can do it again.

Last weekend, my step-daughter Marie took her father and me to her gym, Pure Austin. The gym owns an adjacent quarry lake. Many local triathletes train for open water swimming there. My previous triathlons had been in the Caribbean Sea, the warm, crystalline Caribbean Sea.  No fear of Jaws, here.

I remember the first time I ever did an open water swim at Cane Bay on St. Croix, sans snorkel. My swim buddy Terry and I got stuck over a barely-submerged reef littered with sea urchins; we had to fingertip-walk our way out. We were stung repeatedly by tiny jellyfish in the process. But while it may sound scary, it wasn’t; it was an adventure. Just as we made it out of the shallow reef area, a pod of dolphins swam under us, which I consider a sign of God and Mother Nature blessing the swim.

Shameful admission though: I have a phobia of dark water.  Think “Creature from the Black Lagoon,” the 1954 terror classic.  I remember as a child being petrified while trying to learn to ski and never enjoying the lake water like my family did. When my husband Eric and I went canoeing on an ice-lined lake in Montana on our honeymoon, I came unglued (oops). I guess it didn’t help that a fully-intact frozen dead elk floated under our canoe.

Now, here in Austin, with every step we took closer to that beautiful quarry lake, the more fearful I became.

It didn’t start well.  I entered the water and immediately felt like something bit me in the area of my diaphragm, not once, but twice. I squealed and shot up out of the water.  We found two big red welts on my chest.

Eric held up a towel while I stripped off my suit. There was a small twig in the chest area but no vicious insects. I sat on the dock and pointed my thousand yard stare at the water – wearing nothing but a towel, oblivious at the time to the other swimmers getting in and out of the water on a regular basis.

I agreed with Eric that I would remain on the dock while he swam.  I expected he would help me find a way to get my wet swimsuit back on first. However, before I could say a word to him about it, he was in the water and swimming freestyle toward the first buoy.

Twelve minutes later he finished his first lap of the course. By this point there were six men on the dock with me, as I sat naked in my towel with my bathing suit in my lap. Luckily, before he began his second lap, Eric asked whether I needed anything.

“Not to be sitting here naked with six strangers.” My facial expression matched the dulcet tone of my voice.

He got out without a word (now he was the one who was scared), and we found some bushes and got me re-dressed in semi-privacy. 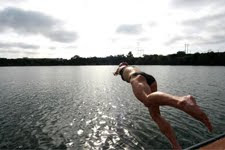 Back in the lake we went. I put my face in the water to begin swimming, and it was like a vise clamped my lungs shut. The water was dark green, there was no bottom in sight, and the feeling of its immensity around me was too much. I made it to the first buoy.  The best I can say of my performance is that my sighting — “aim” for the buoy/swimming path — was better than I thought it would be. Other than that, I was falling apart.

I made it to the second buoy. I kept thinking it would get easier, but the farther I got from the shore/dock, the worse it became. I was hyperventilating, and my heart was trying to hammer its way out of my chest. 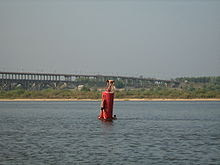 Halfway to buoy three, I was sobbing, and we turned and cut straight through the center of the course for the dock. I swam side stroke the whole way so that I could sight the shore.

It was completely demoralizing.

I had been swimming well for nearly four months in a pool; to think that I might be unable to finish a lake swim was awful.

Eric and I brainstormed for solutions. First, I felt that being in the water with 2500 people rather than one person would probably give me some sense of comfort and decrease the “immensity” of the lake around me. Secondly, Eric suggested we drive to lakes within an hour or two of Houston each Sunday for the next six weeks and practice: just keep getting in lakes and getting back out alive. Lastly, I planned to go back to the pool and swim 1820 meters doing side stroke.  If I could swim the course side stroke within the allotted 75 minutes maximum time, I could stare at the sky and shore rather than put my face into black water.

Our plan?  It worked.  By the time I did my first state-side triathlon, I was able to put my face into the water and finish.  I’ll admit, the first time I did it, I had a panic attack after 100 meters when I unexpectedly grabbed a handful of water plants.  I rolled over and backstroked for a few minutes, breathing deeply until it passed.  It would have helped if I had a paper bag out there with me to breathe into.  But I made it.  And I found I swam a lot faster when I was terrified.  Bonus.

All life is asking of me today is to get in the pool.  There’s no tri-reward to motivate me now; my foot has eliminated that possibility.  But I have done much harder things before.

So . . . I added swim workouts to my calendar, starting this weekend.  I’ll report my swim efforts back here and keep myself honest to the blogosphere. (UPDATE: I swam 3x this week!  Next goal is do the same for 3 more consecutive weeks.)

At least it gives me something to write about.

Here’s hoping you don’t have to give up your “running” for “swimming,” but, if you do, that it’s in a clear 82 degree pool instead of a dark lake filled with water plants and creepy crawlies.