Lacrosse Gloves Make Sense to Me 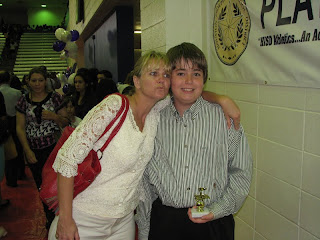 My 14-year old son has ADHD.   He is also a near-genuis, hilarious, dearly-loved and the most well-adjusted member of our family.  When I think of Clark, I hear the Natalie Merchant song “Wonder:” “they say I must be one of the wonders, God’s own creation.” Clark ROCKS.

We always knew he had unique traits (don’t we all??), but we fought the ADHD label/diagnosis for many years.  Instead we would empathize with each other that he was disorganized, his father’s child, “out to lunch,”  and “would be fine when he grew up and had a great secretary.”  Type A slightly OCD woman that I am, I just believed that I could engineer a solution, that my will and need for control were stronger than anything Clark’s genetics could put in front of me.

We employed every suggestion we could find to help him, short of medication.  No matter what we did, Clark was still Clark, and that meant he was the kid who would leave the kitchen with an assignment to put up his folded laundry, forget it by the time he reached the living room, and happily re-enter the kitchen to sit down and read “The Ranger’s Apprentice” without understanding why his mother’s face was turning purple.

I will write about our experience with medication in a future blog.  I will also talk more about the other approaches we have taken – what has not worked and what has worked somewhat –  as well as the impact on the rest of the family and side issues such as gaming and computers.

But in this blog, I want to introduce you to my son.

Last year (8th grade), Clark received a commendation in all four of the standardized “TAKS” (Texas Assessment of Knowledge and Skills) subjects.  He participated in band and lacrosse.  He played a primary role in his middle school play, “The Naked King.”  And he almost drove his parents crazy with his general Clarkisms along the way.

At the time, Love and Logic Parenting was the method Clark’s counselor asked us to use to teach Clark responsibility for his own actions, in conjunction with the assistance Clark was getting in organizational skills – the staggering amount of assistance Clark was getting in organizational skills, which he absolutely hated, both from the counselor and us.  The premise was that we clearly state that the child is responsible for a certain behavior (i.e., turning in completed homework) and that if he chooses not to do the behavior, he is choosing the consequence that goes with it (i.e., yard work).   Logical, right?  Loving, too?  Sure…but, it didn’t work AT ALL.  Not a single bit.  It worked amazingly well with his non-ADHD siblings, though, so it was not a total waste.

To give you just a taste, I offer up this VERY one-sided Instant Message conversation between my husband (trimon29) and me (pamelafhutchins).  This exchange is about yard work Clark was doing as a consequence for not turning in completed homework.

Emphasis added.  Note that it truly is a miracle that Clark survives his mother; yelling only once in this lengthy exchange was quite an achievement for me.  Intellectually, I know yelling does no good, except to occasionally keep my head from exploding off the top of my neck.

Our learning from the scenario above?  That Love and Logic don’t overcome the wiring of an ADHD brain.  Some behaviors just aren’t a choice Clark makes.  Some are, though, and one of our challenges is to keep him from gaming our system by using ADHD as an excuse for bad choices, especially as he becomes more savvy.

What’s your favorite story involving your beloved ADHD child?  Please feel free to comment.  Share with the rest of us so we can all celebrate our human frailty together.  Over the next few months, as I go over other humorous situations and the failed parental solutions Clark has lived through, I would love to hear from you about things that have and have not worked.  I’m hoping I can get Clark to blog on here once or twice, too. Fear not: Clark’s is a story of great success by the time we get to “the end.”

NOTE: Clark reads every blog I ever write about him, and there have been many over the years.  He frequently battles with me/keeps me honest over our sometimes divergent views of the facts, although I have explained to him that truth should never get in the way of a good story.  The big surprise is that he loves being the subject of my writing.  He knows one thing for sure: he may test his mother’s patience, but he is a very loved kid.