The high point of the 25-year reunion of the Amarillo High School Golden Sandstorm 1985 graduating class was, for me, Jeff Swinney belting out Bob Seger’s Turn the Page.  No offense to Jeff, but it was not because of his voice (and what he lacked in pipes he made up for with passion).  Many other singers hit the mike, professional singers even, and they were awesome.  But Jeff wins my top honors.

For many 1985 Sandies, the 25-year reunion did not merit a trip to Amarillo.  Some that lived in Amarillo did not make it to the event.  People have conflicts – it happens – I know.

For those of you that showed up, thank you so much.  Making the effort to “show up” means everything in life, doesn’t it?  Whether it is for work, school, church, sports practices, or your relationships, it is all about the effort and the attendance.

Because I have never reunioned before – not for high school, college, sorority, or law school – I was unaware of the emotional baggage I could drop off for “no return” at the comeback carousel of a reunion.  Listen, folks, I don’t even do family reunions if I can help it.  Social interaction is the one thing in life that I fear and dread.  Surprised?  I’ll bet you are.

But confidence does not always equal comfort, and energy does not always mean enjoyment.  I prefer an evening in with my husband and kids, or a morning of road bicycling with just Eric.  I can handle only so much chit chat and laughter before I search for my love’s protective eyes and signal “take me home,” exhausted and melancholy for no good reason.

As to high school reunions, some of this is just “me” and some is actually the high school bags. Yet I found the experience of partying with our grown-up selves at the 25-year reunion liberating.

Friday we enjoyed a night of dancing to 80’s music at Le Chateau with a mixed Sandie-Rebel crowd, complete with the original 80’s videos playing on the monitors.  My gosh, our kids would mock them, but I still remember catching a first glimpse of the Duran Duran (her name is Rio!)  and Flock of Seagulls (I ran!) videos on MTV at Karol Cox Cargill’s house, where we were NOT supposed to be when her parents weren’t home, during the days after our freshman year, and there may or may not have been boys with us, which was even more against the rules.  The videos were amazing, then and now.

Anyway, the bags I offloaded at the reunion?  For the first time around this group of people, I didn’t feel like “the someone other people secretly loved to hate.” Maybe some of you have psychoses like me, maybe you don’t – this is not necessarily rational or due to anyone’s overt actions.  But in high school, I felt conspicuous; I sensed eyes watching me, waiting for me to trip and fall off the “AHS Queen” pedestal of what appeared to be “having it all.”

OK, maybe you never did, it could have all been in my head, but I felt disliked, and it has stuck with me ever since: I am “dislikeable.”  I’ve always described it as being the show rat turning the wheel in a cage behind a pet store window.  Hey, maybe that is why I felt the need to torture myself on the “Taco” slide at Splashtown, a traumatic near-death experience from which I still have not fully recovered!

So, I haven’t been back for a reunion, until now. For the first time, at this reunion, I gathered together with people with whom I shared a common background without a reason to feel like anything except a welcomed member of the crowd.  I loved blending.  I loved being with my old classmates, my friends.

Everyone has their own truth, and here’s my confession: I’ve grown weary of standing at the front of the room.  I need a break.  I came full circle in Rudy’s Barbecue with 50 of my 502 classmates from Amarillo High School.  I left it behind.  Ah, I feel the little tears in my eyes as I type this, congratulating me on writing something real.

And it makes me wonder about your secret hurts and truths – what you left behind over these 25 years, and what you found; it makes me want to give a lot of hugs.

So I finally left behind, thank God, the surprisingly insecure 18-year old girl with no cellulite and the glowing skin.  Instead, I get to be me now, the authentic me, the woman who laughs too loud and eats too much, she who finally knows how to love with her whole heart and has given up trying to please other people.  Do I wear you out? Take a nap, then, because this is the only me you’ll ever get 🙂 . 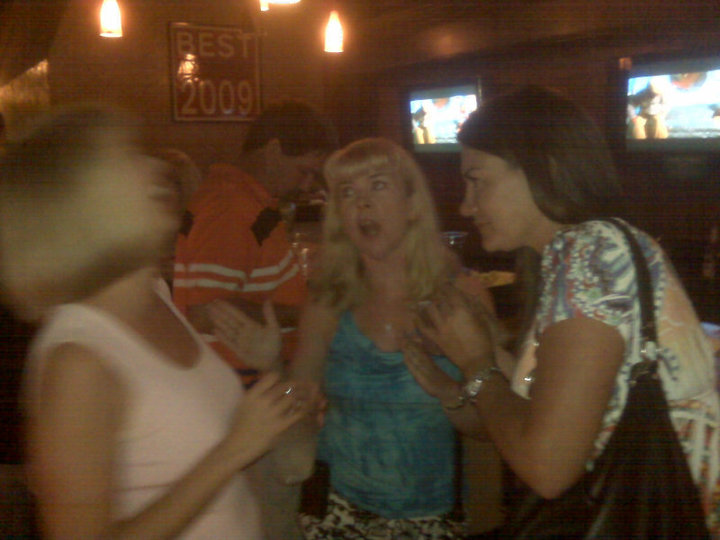 5 minutes in 25 years. It was not enough, but it was great while it lasted.

I found not just me, but I found all of you, the others who showed up at Le Chateau, Splashtown and Rudy’s, despite the thunderstorms.  I found out how much I cared about what you have been doing Ms. Librarian Kayla Crass Middleton, who you are married to Mark Palacio (and she’s a doll, as are your daughters), the ages of your son and granddaughter Melissa Hawley Lee, and how your parents are doing Darci Dupriest Rittenberry.  I marvel, truly, at your talents Brad Caudle and Marni Bush Smith, your eyebrows Donny Riggan (I want a reunion T-shirt), and your life experiences Darren Wheeler (Marines rock).  I was proud (is that weird?) of being one of such an awesome group of people.  Just the sight of your face, April McHugh Roush, broke my heart with missing you.  I discovered that I could recognize all the women – even the tiny Michelle McCorkle! — but that the guys who left high school as barely more than boys had grown up after graduation and become strangers with their thinned hair and weight gain or loss, but I remembered their voices (Lance List) and their unique gaits (David Cox) even when the faces left me blank for a few beats.

What’s more, I found Amarillo.  Amarillo, Texas, where I have access to everything I ever did in Dallas, but with clouds chiseled out of the clear sky that rivaled my former home in the Virgin Islands, 99% less traffic than Houston, and the nicest people on Earth, period.  I saw the work ethic of the future president of the Doughnut Stops in the face of a 19-year old boy.  And I got to eat an apple fritter and a cinnamon roll that defied the rule of “it never tastes good as you think it will” that normally applies to all splurgy, not-worth-breaking-a-diet-for treats, no matter what city they’re served in.

Sure, it smelled like cow poop; we called that the “smell of money” growing up. The weather got a bit on the breezy side. Our hotel was atrocious with a gag-inducing breakfast, non-functional room keys, and false advertisement of (nonexistent) free internet and gym passes – two absolute minimums for Eric and me when we travel — but our room was just as bad in the oft-celebrated Austin not more than a month ago.

Also, my husband won’t quit putting an A on the end of all the LLO words now: AmarillA, yellA, fellA.  This will get old very quickly.  If some cowboy doesn’t kick his ass before we leave town, I will!

But it was all worth it. 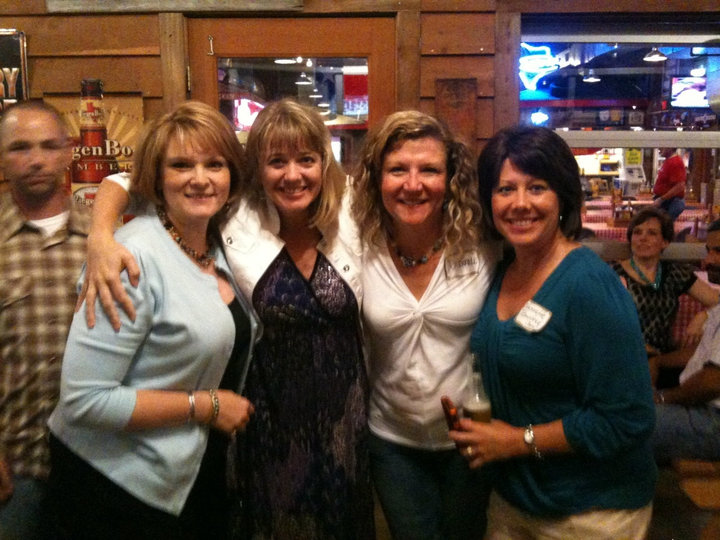 I showed up.  I came home.  And I turned the page.

Good to see you, Sandies.

p.s. A giant thank you to Tonya Johnson Ask, Stephanie Hayes Swindell and Deborah Dickinson for putting it all together for us.  And to Jody Rose for arranging Le Chateau. That’s showing up, and then some.