The Redneck Adventures of Bubba-Mon and the Quacker

by Pamela | Oct 10, 2010 | Caribbean Life, How To Screw Up Your Marriage, How to Screw-Up Your Kids, Puppalicious And Beyond, Rednecking Can Lead to Redneckedness | 43 comments 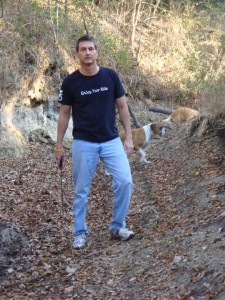 Dear Bubba-mon: No self respecting redneck would be caught dead wielding a machete. Getcha something with a 2-stroke engine in it, honey. Love, Pamelot

So, recently my long-suffering island-boy-to-Texas-transplant husband convinced me that the perfect retreat for our family would be in a secondhand (or would that be thirdhand?) trailer on a bug- and snake-infested piece of property five miles from Nowheresville, Texas.  Yeah, for real.

We had been looking for hill country acreage for quite some time.  The conversation about this one went something like this:

Me: Stop me if I’ve said this before: some cowboy is going to kick your ass and good one of these days for making fun of our accents.  And, ponds have snakes.

Me:   I like that it is only an hour and a half from your office.

Me:  Forget the cowboy: I’m going to kick your ass.  And I made a promise to myself years ago: no RV’s, no travel trailers.  Sheets, running water, A/C, indoor potties, and no trailers.

Eric:  You’re not being very n-ahhhhh-ce

(Sounds of scuffle and pummeling)

Well, of course, we acquired the property, which we promptly dubbed Shangri-la.

Then we went to look at a few trailers.  We bought the trailer-of-a-redneck’s dreams from a real n-ahhhhh-ce couple even further away from Nowheresville, Texas.  The Missus, who was roughly my age (yes, that old), met us at the door in Daisy Duke shorts and a tight, scoop-neck blouse.  Over her 15-or-so inches of exposed cleavage and sun-damaged skin, she wore an incongruous accessory: a giant neck brace.  Which gave her no trouble as she demonstrated all the features of the trailer, climbing in, out, over, and under it with strength and flexibility. Hmmmm.

At the close of our transaction, she and I handled the money.  I counted out the 20’s for us to pay them, she counted to verify.

“What you say you and me run on up to Dallas and head to LaBare?” she said, brandishing the stack of bills.

This was the tribe into which we entered with our purchase. O M G, exactly what I had been afraid of.

It came time for Bubba-mon and me to stash the trailer on Shangri-La.  We had some *issues* (gasp).

Long story short, Bubba-mon ultimately decided that the stump and Suburban were conjoined at a non-critical area, and he got aggressive with the gas pedal.  It worked.  Employing his superior trailer-backing skills, we hid the Quacker in the woods and headed home to Houston.

The following weekend, we loaded up the truck and we moved to Beverly…Shangri-La that is, big ponds, bugs and snakes (cue banjo music).

Besides ensuring the viability of our hot water heater, potty system, and A/C, Bubba-mon had another very important job to do that first weekend:  install signal booster so that Mrs. Bubba-mon could continue to receive messages from the mother ship (Facebook) through her implanted microchip system (iPhone).  Bubba-mon ultimately mounted the antenna at the top of a tree which he chopped down with his bare machete, said tree in turn installed on top of the Quacker.

Upon entering the trailer, a horrible smell assaulted my princess-and-the-pea-like nose. [I know, this is not a perfect analogy, but run with me on it]

Me:  There’s something dead in here, Eric.

Five minutes pass.  Meanwhile, I make a tactical error: I flush our brand new thirdhand potty.   A noxious odor fills the trailer.  The LP gas detector goes off immediately, screeching out its warning to everyone within a five-mile radius.

Bubba-mon: (running) (IN THE WRONG DIRECTION) What the hell’s going on?

Me:  I don’t know.  I flushed the potty, it got really stinky, and the alarm went off.  I’m afraid we have a propane leak. We have to evacuate.

Bubba-mon:  Hmmmmm, but the propane isn’t even turned on.  (Sticks head foolishly into trailer)  Oh SHIT.  What’s that smell?  (Turns to me) OH, shit. That’s methane gas.  (Reaches over and turns off LP gas detector)

Bubba-mon:  I can fix this, no problem (this is a phrase you will hear oft-repeated in the adventures of Bubba-mon, I assure you)

Despite all of this, or maybe because of it – I dunno – I will grudgingly admit that Bubba-mon was right: this place is n-ahhhhh-ce and I l-ahhhhh-ke it.  I am head over heels for the Quacker, Shangri-la, Nowheresville, and, most especially, for my B-M (I had to use those initials for Bubba-mon at least once in here, because I have a childlike sense of humor).

Stay tuned for more adventures of Bubba-mon, the Quacker, and Shangri-la in Nowheresville, Texas.  Until then, y’all, wishing you many laughs and adventures of your own,

p.s. I promised I would not use the photo *in this blog* taken in the Quacker of my triathlete Bubba-Mon in his Ironman underwear, said photo taken without first obtaining his permission and a valid, signed release.  Please note that I kept my promise.  However, I have put it up on my Facebook page instead under Photos.

p.p.s.  Of course I am just kidding.  Y’all know I would never talk about or show pictures of ANYONE in speedos or their underwear, especially my husband.

p.p.p.s.  Yes, he really does have a pair.  They are so cuuuttteeee.  Whether or not there’s a picture, mum’s the word.