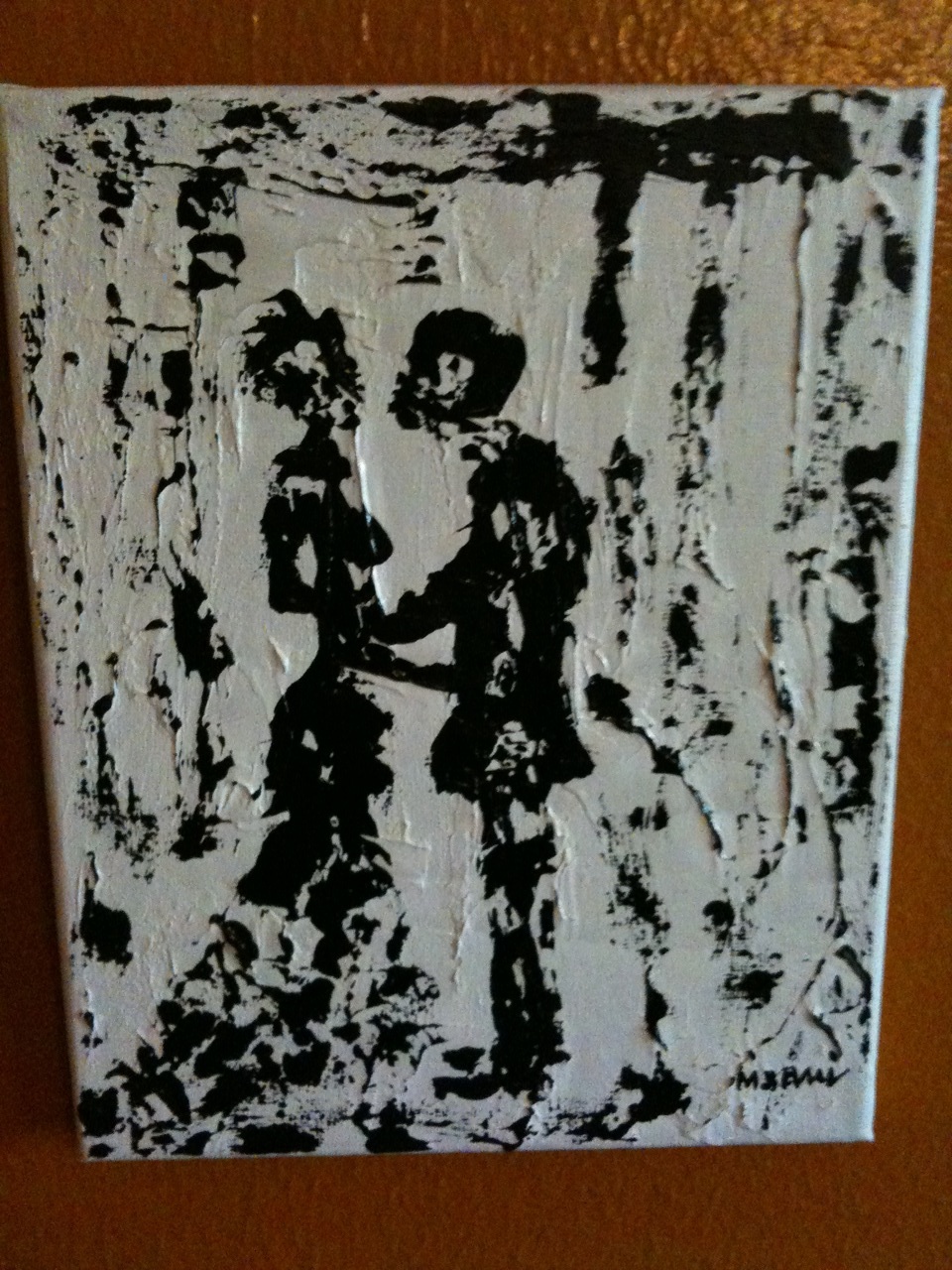 One of the things Eric and I most wanted to do in New Orleans was go on a ghost tour.  We booked our after dark walking tour with Haunted History Tours which met, fittingly, at Rev. Zombie’s Voodoo Shop.   The tour cost us $20 per person, plus tip: one of the cheaper things we did on our visit.

Our tour guide, Rene, hailed from New Orleans.  He wore a tuxedo befitting the solemnity of the proceedings, and he promised us he learned all his lore while hiding in the library from fifth grade bullies, where he studied New Orleans history and auto-mechanics.  The auto mechanics didn’t seem to be related or necessary to the topic of our tour, but he did know a lot of interesting and helpful stuff about cars.

First, let me say that the tour exceeded our expectations and we would highly recommend it.  Some of the stories raised the hair on the back of our necks, like the story of the two great fires in the city, both emanating from roughly the same location, and the first fire burning down over 800 buildings…all because it occurred on Good Friday and the church could not ring the bells to warn the citizenry of the blaze, as they would normally have done.  Then a third fire started in the same block years later.  While it burned, the sound of bells rang out in the shop standing in the spot of the first great fire.  But there were no bells in the shop.  Only the souls of those lost when the bells could not ring to save them from the earlier fire.  Spooky.  And supposedly caught on audiotape and validated by some paranormal experts from the University of Texas.  Or so Rene says.

And then there was the story about a hotel in the location of a former boarding school where the headmaster and 33 kids died in the first great fire…and even today, ghostly children wander the halls and wake the guests, who complain to management about the unruly disturbance not knowing the source is from beyond and not truly a present-day child.

Or Julie, the mulatto mistress of a man named Mishi, who asked him to marry her despite the conventions of the time making such a union unlikely.  He told her to go lay naked on the roof and if she made it through the night, he would marry her.  And that night was the coldest of the year.  With an ice storm.  He found her naked body dead and frozen to the chimney on the roof the next day.  Mishi rests peacefully after drinking himself to death, but Julie haunts the building still, and Rene directed us to take pictures of it in case her spirit appeared, as she was most active around the anniversary of her death — and it was the coldest day of the year so far when we were there.

The way Rene told the stories kept me up late that night.  And I loved it.

But now let me follow up on all that wonderfulness with a few points of humor/criticism for the evening, because that’s what I do best.  And what most of you were hoping for.

This was a rated R tour, and Haunted History made no bones about the rating.  And yet two families brought young children (actual kids,  not ghostly kids).  The kids monopolized the tour by blurting out “cute” comments, couldn’t keep up (walking), necessitated the group splitting up at break because they couldn’t go in the bar that we were scheduled for, and then held up the group when their families were late rejoining us.

Oh yeah.  And the tour was rated R.  Definitely rated R.  What parents would bring their young kids to this?  Brings to mind the time I took my precious tots to see Talladega Nights and spent most of the movie with hands over their ears.

So, for example, one of our stops was at a former brothel, and the stop was heavy on “history” with only one ghost story.  The “history” included the origin of words like “ragtime” (think “Under the Red Tent” meets Scott Joplin) and the water basins kept bedside known (or so Rene said) as “peter pans”.   And the kids hung on his every word, their little hands shooting up with comments at quite unusual moments.  Oh how cute.  Except that it was a rated R tour.

Y’all know I like kids.  Between Eric and me, we have five of them.  But kids aged 4-8 don’t belong on an adult rated R walking tour, methinks.

Or maybe I’m just being a cranky old biddy.

Either way, they didn’t spoil it for us.  We loved it.  I’d post pictures, but it was dark, and none of them came out worth a darn.

Right before the walking tour, we took a “just us” (and the driver) carriage ride through the Quarter for half an hour.  It was waaaayyyy more expensive than the group ghost tour, but also lovely.  The driver regaled us with history, but none of it was haunted. Here’s a picture of Eric in Jackson Square right after the carriage ride and before the ghost tour.  I think he looks pretty cute. 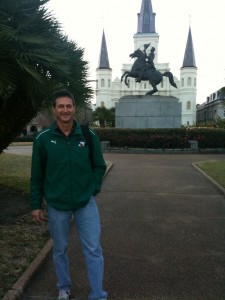 Many of the ghost stories on our Haunted New Orleans tour centered around the cathedral in the background, or the close-round environs.

After our two tours, I want to go look up our guides’ stories and find out for myself whether they are fact or crap.  Or maybe I don’t.  Sometimes it is just nice to believe.

And to enjoy.  Which we did.  Kids notwithstanding.

p.s. Yes, I know this post was poo.  I am having vacation-lag.  Quit that internal griping and criticizing and just be glad I’m doing anything productive at all.  Because technically I’m still on vacation until January 4th.  So there.

p.p.s. This is totally off-topic, but Eric and I buy ourselves one treasure on each of our vacations.  This Christmas trip was to celebrate our wedding anniversary, so we brought this home and hung it on the wall beside our bed: 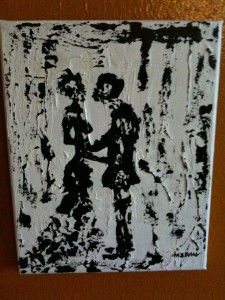 The image of "Just Love Me" by Msani looks a little bit haunted, don't you think? Either way, we loved his sense of humor. He did this freehand with a putty knife. See more of his work at www.msaniartgallery.com or visit his gallery on Royal in the Quarter.