by Pamela | Mar 22, 2011 | Caribbean Life, How To Screw Up Your Marriage, Puppalicious And Beyond, Rednecking Can Lead to Redneckedness | 53 comments 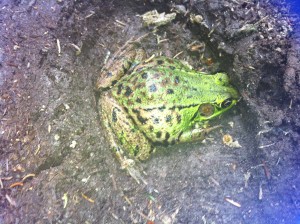 The music of a million trumpets in our own backyard.

I WROTE THIS FOR SANDY WEBB.

All the signs were there.

We even talked about them, way back then.

“The owners must love frogs,” Eric said, as we toured the back yard of the house that would become our home.  He nudged a knee-high pottery frog planter with his foot.

“Umm hmmm,” I said.  I could have cared less.  I was calculating our offer.

“That one is…odd,” he said.  He pointed at a large concrete frog Buddha almost hidden by greenery beside the waterfall pouring from the top pond into the middle one.   Those ponds and that greenery, with its giant elephant ears and bougainvillea, were visible through the full length seamless back windows all the way from the front door of the house.  They reminded us of home, of St. Croix in the U.S. Virgin Islands, of Estate Annaly.  How could we not buy this house?   Unconscious to my reverie, Eric continued, “It’s like a frog shrine or something.”

I remember saying something noncommittal, like “Whoa, that is odd,” as I walked back into the house with the real estate agent.  In retrospect, she seemed … in a hurry.

We moved in March 9th, springtime in Houston.  Beautiful springtime.  For roughly six weeks, the temperatures are in the 70’s with a soft breeze.  Flowers bloom, but mosquitoes don’t (yet).  Sunlight dapples the ground through the vibrant foliage on the trees.  Birds don’t chirp, they sing.  The fragrance is clean more than sweet.  It’s heaven.  We moved into our house, and it was like heaven to us.

During our third week there, it started.  Our furniture would not arrive for another month.  Until then, we had exactly one piece of “furniture,” a standard double mattress on the master bedroom floor.  The kids slept in sleeping bags.  It was spare.  We ate our meals on paper plates sitting cross-legged on the floor.  When we called to each other, our voices bounced from wall to wall in our 4,000 square foot echo chamber.   Still, it was like heaven.

Until about midnight during that fateful third week, when the first frog croaked.   His piercing rasp drew our attention, but not our consternation.  What was one frog to us, here in heaven?

Oh, had it only been one frog.  Or one hundred frogs.  Or even one thousand.

By three a.m., Eric stood pond-side in his skivvies, 300 pounds of canine looky loo’s beside him.  I stood in the doorway.

Well, yes.  Yes, they were.  Frogs were, ahem, fornicating everywhere.  It was overwhelming, really.  I swear, if you’d googled “swingers’ resort for frogs” you’d get our address.  The amorous amphibians held their tongues now, though, from the second Eric switched on the backyard light.

Muttering more curses, he snatched them up by stubbornly conjoined two’s and flung them over the fence.  I did not dare ask his plan and after 10 minutes I sneaked off to bed.

Night after spring night, Eric battled the frogs.  Day after spring day, he looked online for ways to “off” them.

Eric’s crazy campaign against the frogs was beginning to drive me insane, too.  Their sounds had long since become white noise or, at worst, bedtime music to me.  Eric’s tossing, turning, cursing, and trips-in-and-out, on the other hand, kept me wide awake.  He would report the body count when he returned to bed.

“If I could just think of a way to poison them, I could sleep,” he said.

“If you poison them, you’ll poison the dogs, maybe even birds,” I said into my pillow.

Based on my urgings to quell his frog-blood lust, Eric, for a time, pursued repatriation.  Armed with black industrial-sized garbage bags, he loaded up his little nemesi for a trip to the nearby bayou.  Unfortunately for him, citizens were on alert for a serial murderer that spring and a man seen dumping lumpy garbage bags into the waterway attracted attention.  Eric drove home and only just barely arrived before the cops came to check him out.   Reluctantly, I vouched for him.

The kids got into the spirit of Eric’s quest.  Instead of one underwear-clad man in the backyard, we had him (thank the Lord he now took time to don a pair of camo shorts — and at least it wasn’t camo face and body paint, too) plus the 9-, 11-, and 13-year olds.  Like me, the dogs slept through most of it now, except when one of the kids would make a particularly good snatch and yell in triumph. Well, at least this would take care of any lingering need for sex education.

The children created an offering of dead froggies to the Buddha.  I feared this would have opposite of the desired effect.  Maybe it was my imagination, but I could swear their numbers doubled overnight.  It was bad.  It was very, very bad.

Read Part Two HERE on or after March 24th!  (Because I’m taking Erin Margolin’s advice and keeping this post short, rather than running all 1600 words at once)