The Best Laid Plans of Cardinals and Men 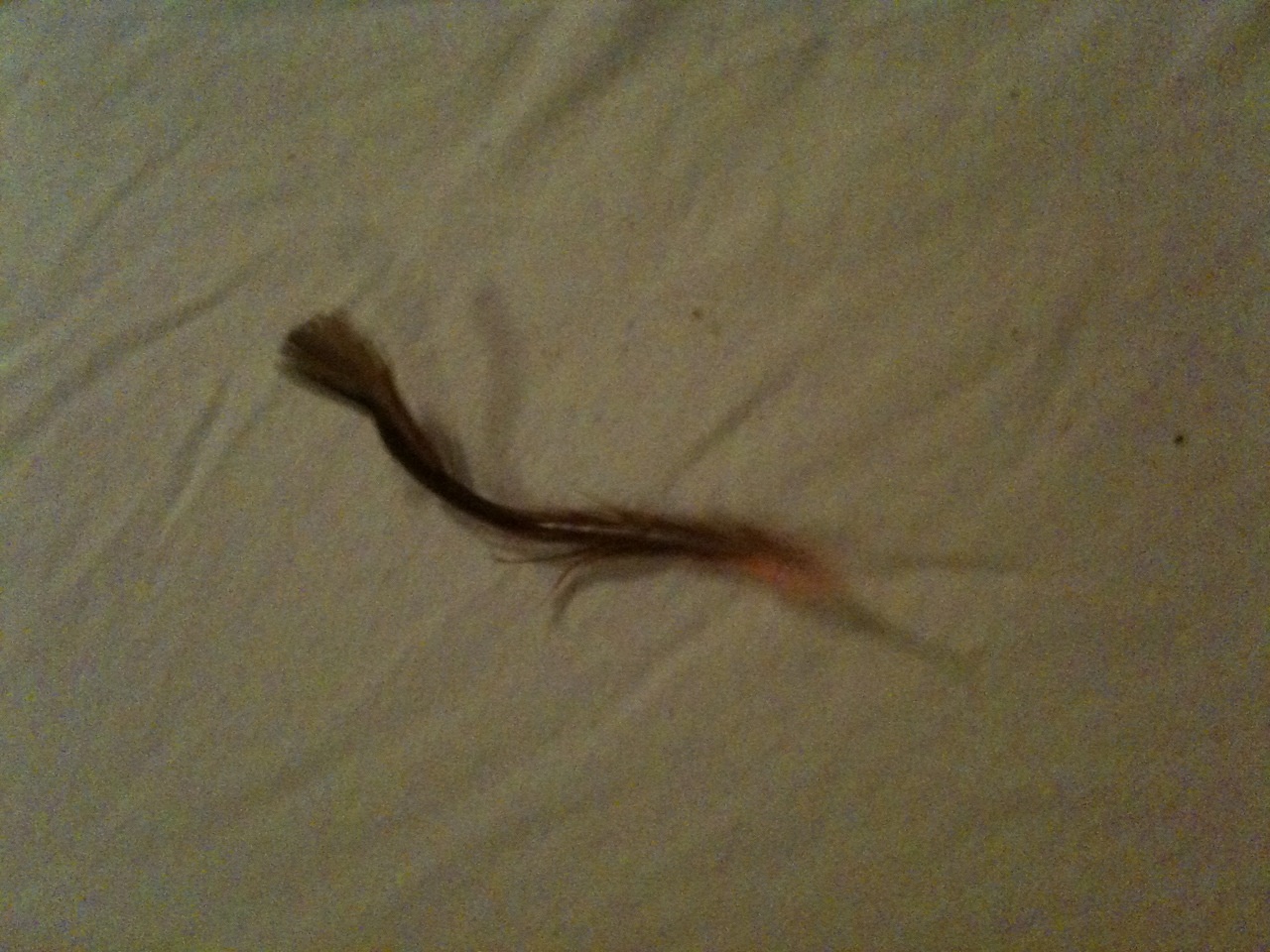 I am a planner. I plan and schedule and plot, much to the delight of my engineer/triathlete husband, who loves to live by a plan. Even more, he loves me to make the plan and then us both to live by it. And what he loves most of all is when the plan I make and we live by includes a healthy dose of us bicycling and swimming together. However, I believe a plan is a structure within which one should expect reasonable changes, while Eric casts his in cement. Obviously I am right so there usually isn’t much of a problem.

So we planned to ride in the Fayetteville, Texas “Good Ole Summertime” 69-mile bicycle tour. We trained for it. We talked about it with joy and reverence: Fayetteville, and the greater-Fayetteville-area-including-Round Top, boasts some of our favorite roads for cycling, anywhere. Eric even accidentally strayed off schedule and went to get our packets a full week before they were available for pick-up (don’t ask).

The night before the race, I developed a PMS/hormonal migraine. My PMS symptoms – Permanent Menstrual Syndrome, per Eric, although increasingly it looked like the early onset of perimenopause – occur erratically. They don’t follow a plan. Uh oh.

Because it was the middle of the night, I took one of my gentler migraine prescriptions, hoping that this pill plus sleep would be all I needed. I woke up at 5:00 a.m. to the mother of all migraines. I caved-in for the elephant tranquilizer medication. Unfortunately, I was so nauseous, I then couldn’t eat. My husband, a man of immense patience and even greater kindness, suggested we stay home.

But we had made a plan and I knew it was important to him, so I got in the car anyway under the theory that I had no idea now how I would feel in 2.5-hours when it was time to mount a bicycle. Although I kinda did know and just didn’t want to admit it.

I should have listened to my husband.

On the way to the race, driving in the dark, the unthinkable happened. I had my head on Eric’s shoulder, sweetly snoring and drooling under the influence of the elephant pill, when he let out a tiny swear word. Actually, I believe it started with an F, and was preceded by the word “mother,” and that his voice blasted through my cranium and echoed madly inside my impaired brain.

“What happened?” I screamed, heart hammering, hand clutching throat, eyes sweeping the road for signs of the apocalypse.

OH MY GOD. HE HIT A CARDINAL.

OK, if you don’t know my husband, this might not seem like a very big deal, I’ll admit. But since the time he could speak, my husband has proclaimed himself a fan of the Chicago Phoenix St. Louis Arizona Cardinals football team. His screen saver at work? A giant Cardinal logo , until very recently when he finally switched it to a picture of us, under teensy tinsy little applications of subtle pressure from me. He had watched their playoff game in 2009 through a webcam picture of our TV in Houston on his laptop in his hotel room in Libya, at 2:00 a.m. He collects cardinals and Cardinal-paraphernalia and insists on displaying them prominently in our bedroom (don’t go there).

Despite his obsession, though, he had never seen an actual live cardinal BIRD until we moved to Houston. Eric grew up in the U.S. Virgin Islands where he only caught glimpses of cardinals on TV. He pictured them as red, fierce…and large.

One day while unpacking in our new house in Houston, I saw a male cardinal through the window. Nonchalantly, I called out to my cardinal-obsessed sweetie, “Hey, Eric, there’s a cardinal in our bird feeder.”

Eric, whose physique looks like you would expect it to after 20 years of triathlon and cycling, pounded into the living room like a rhino instead of his usual cheetah self, wearing an expectant grin and not much else.

Lost for words, I pointed out our front window, and prayed the elderly woman next door was not on the sidewalk outside our house. Or at least that she was using her walker.

“It’s awfully small.” (That was Eric that said that, not the elderly neighbor woman.) He looked so crestfallen. Yes, the mighty cardinal is a tiny slip of a bird.

Back to ear-splitting expletives and wife-under-the-influence. “Honey, I didn’t feel an impact. Are you sure you didn’t miss it?” I asked.

Ahhhh, good point. We drove on, somberly. We arrived at the race. I stumbled off to the bathroom. When I came back, Eric was crouched in front of the grill of our car. I joined him, at first confused as to what he was doing. He held up a handful of tiny red feathers.

I swear it was the drugs, but I burst out laughing. “You, you of all people, you killed a CARDINAL?”

He glared at me as he picked the brightest of the small feathers and tucked it reverently into the chest strap of his heart monitor. “I’m going to carry this feather with me in tribute, the whole way.”

So we got on our bikes: me, wobbly, cotton-mouthed, and somewhat delirious; Eric, solemn and determined. This, the ride for the cardinal, would be the ride of his life. Sixty-nine miles to the glory of the cardinal.

I made it all of about two miles before I apologized. “I’m anaerobic, and we’re only going 12 mph on a flat. My neck and back are seizing up. I don’t know if it’s drugs or horomones, but I’m really whack.”

“You can do it honey. We came all this way. Now we’re riding for a higher purpose.”

I gave it my best, I really did, but, a few miles later, after a succession of hills where going up with a racing heart beat was only slightly less awful than cruising down with a seriously messed-up sense of balance, I pulled to a stop. “I’ve never quit before, but I can’t do it today, love.”

A beautiful male cardinal swooped across the road in front of us. Eric bit his lip. “I understand. Do you want to flag a SAG [support and aid] wagon?”

My husband treated me like a princess that day, but all the excitement had drained out of him. This race we had planned for was not to be. And a teacup-sized bird had sacrificed his life for our non-event. The waste of it all, the waste of a day, the waste of a life: it was hard to overcome. But Eric tried; I’ll give him credit for that, the man really tried.

That night I felt better. We did a make-up ride on the trainer while watching We Are Marshall (interrupted occasionally by Eric’s sobs, because the only thing worse than a dead cardinal is a dead football player). Afterwards, I pulled our sheets out of the drier and brought them into our room. Eric, clad in his new Fayetteville Good Old Summertime t-shirt, helped me put the warm cotton on the bed.

As we hoisted the sheets in the air to spread them out over the mattress, a tiny red feather shot straight up toward the light and wafted down slowly, back and forth, back and forth, until, pushed by the soft breeze of our ceiling fan, it landed on the pillow on Eric’s side of the bed. 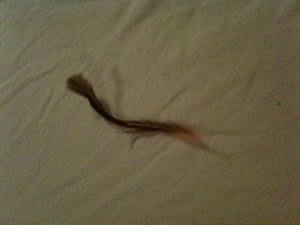 Steeling myself for the worst, I shot a glance at him to see if he had noticed. I did not exhale. Maybe I had time to brush it off quickly? Too late — he was staring at the feather. “Is that damn bird going to haunt me for the rest of my life, now?” he asked. But he smiled.

Now I could breathe. And tease. “Probably. You did senselessly murder a cardinal, Eric.”

And he laughed.  And we began to talk about our plans for the Tour de Pepper ride the next weekend, a ride where, I hoped, we would not cause the death of any of God’s tiny creatures.  Or at least nothing but an armadillo.