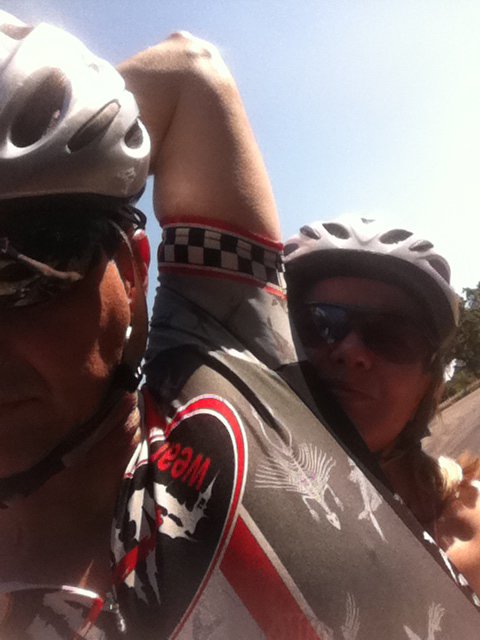 Here in Texas it is hot and water-less.  Don’t confuse water-less with dry — we’re still plenty humid around Houston.  Which makes it feel even…you guessed it…HOTTER.

This last weekend, Eric and I checked in at Nowheresville.  We had a fab time, if you call triathlon training in 106 degrees fab.  I guess we do 🙂 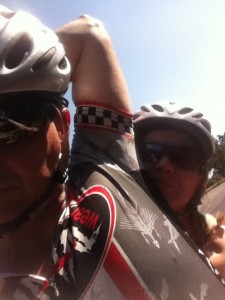 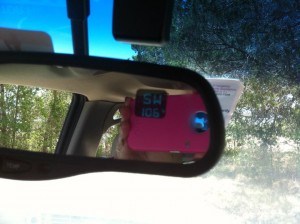 Well, that works OK at 96 but not at 106. Picture taken when car, which had been parked in shade with engine off, was initially started, post-ride. 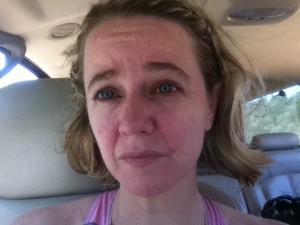 We stopped after 25 miles because I felt like this. 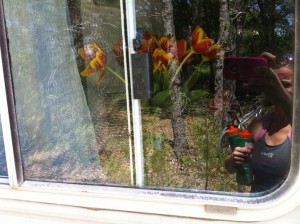 The heat even wilted my tulips (seen from outside the Quacker’s window). 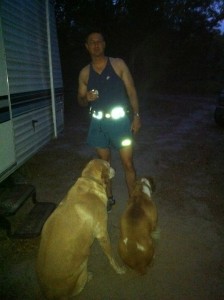 We started at 6 am for our run the next day, b/c we are quick learners. Here is Eric, eating a pre-run snack and giving the dogs a pep talk.  It was only 82 degrees, & no sun.  It felt like a cold front after the day before! 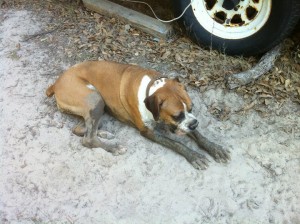 Layla did great and ran at my left side the whole time except when she was fending other country dogs off me. But she was hot. Hot enough that we discovered our water-phobic boxer in a muddy pond bed, up to her shoulders. 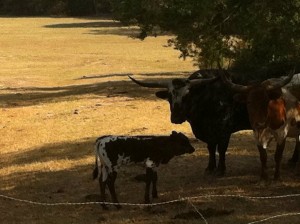 Cowboy didn’t fare so well, even though he’s lost 15 lbs (we’ve had him on a diet). We were out looking for him in the car when we took this picture of a baby longhorn. We found him back at the Quacker, covered in mud, when we had given up and gone home. 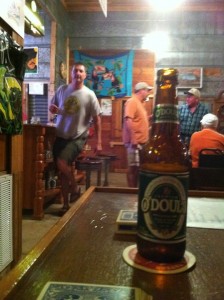 Distance athletes & hikers know that you always bring a baggy with tissue with you. I can also recommend you always wear underwear you don’t mind leaving behind. (YIKES) Later, we went out for German food and near-beer. 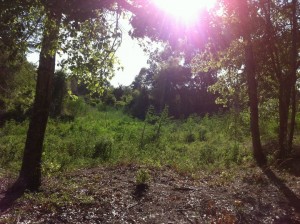 The super-fertile soil in the dried up bed of our two-acre “pit formerly known as a pond” has yielded the only green spots in the county. Tall, fast-growing weeds. 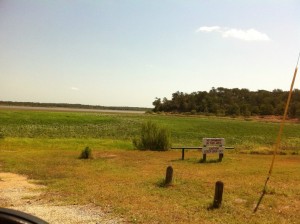 See the sign? Well, I can assure you no one will be breaking that rule here at the Nail Creek boat ramp on the south side of Lake Somerville today. I think I see water in the distance. Makes us feel better about our pond. Sort of.

Stay cool and hydrated, y’all.  On to week two of our 20-week schedule until November 6 “Oil Man” Half Ironman in Conroe, TX!