If a tree falls in the forest. 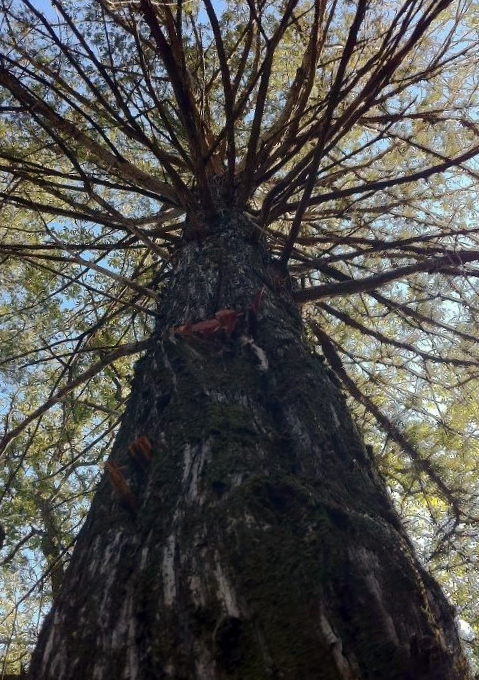 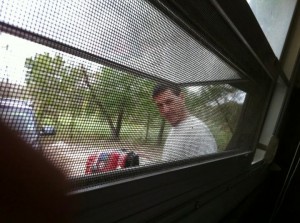 OK, get this straight.  This is my blog, and I am the the absolute final word on what is fact versus fiction on these virtual pages, got it?

Now, just because I am the Grand Poombah of Reality here doesn’t mean I make stuff up.  Occasionally I take poetic license to make things more…compelling.  But I start with the truth.

It is with this explanation that I launch this week’s sad tale.  And it all started in a sandy little place we like to call Nowheresville, Texas.

Lately, our tranquil Nowheresville weekends (aka “Death Camp“) have changed to become even more idyllic.  [This is a literary example of irony.  In real life, irony is known as sarcasm.]  That’s because we have added manual labor to Eric’s slacker-like normal agenda of “triathlon training in extreme heat.”  Our manual labor is for a good cause: my parents lent us their skid loader, and we are using it to clear our driveway and homesite.  And to build a running trail for Ironman training.  And to clear our “Jack and the Beanstalk weed pit,” fka our pond.

** For those who are keeping score, we’ve tried this skid loader/tractor exercise before.   It cost $1000 for one day, including all damage repair to the skid loader.  [Don’t ask]  It was after this day of skid loadering that we ended up, six months of Texas drought later, with a pond that looked like this:  click here.  It used to look like this:  click here, and scroll down until you get to the good stuff.   Where I come from, we call that pouring money down a dry hole, literally. **

Back to our story:  To augment our tree/bramble/brush/bush/land clearing capabilities, Eric invested $700 in a new industrial chain saw and gas-powered pole saw.

** For those who are keeping score, we’ve tried this chainsaw exercise before.  It cost $250 dollars, and the unit was deemed unworthy of repair after its “rougher than intended use” at the hands of Bubba-mon, aka Eric. **

Where was I?  Oh yes, our visit to Lowe’s.  Anyway, Bubba-mon presented me with dust masks, gloves, safety glasses, and the two new chainsaws with which to massacre our forest, all of which I later wore, and none of which did he let touch his skin the entire weekend.  We loaded up the dogs and the teenagers, and we headed to Nowheresville.

Susanne (14) set the tone immediately.   Here is a picture of Suz 5 minutes into the weekend.  Check out the look on her precious, precious face.  I can’t tell for sure, but I think she’s smiling. 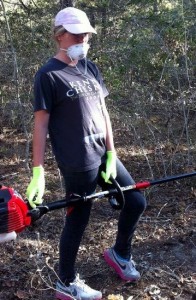 Don't let her grip on the pole saw fool you. She didn't actually use that thing.

Here is a picture of Suz the next day after we sent her home and she spent the night with a friend dolling up and taking pictures.  At least she didn’t go anywhere looking like that.

So, I started using the pole saw, and Bubba-mon headed to the shed to fire up the skid loader, which roared like a champ.  And that’s all it did.  The bucket boom would not lift, and as he backed it up, the bucket wedged 3 yards of sand underneath the belly of the skidloader, causing it to turtle with all 4 wheels spinning helplessly in the middle of a mighty sandstorm.  After only 1.5 hours of jacking its 8 tons up on a car jack rated for 2 tons, and then shoving cedar logs under the wheels and digging sand out from under the belly, we had it free.  Free and still broken and unusable.

The purpose of our trip, remember, was to use the skid loader.  And we had a whole 3-day weekend to do it in, except now we had no skid loader.

So, we gave each other a quick smooch and reminded ourselves how lucky we were to be together (notwithstanding Suz) and Bubba-mon fired up the big saw and instructed me to stay clear so that I wouldn’t get hit by debris.  No problem.

For awhile, we got a fair amount of clearing done.   Bubba-mon chain sawed, and I dragged the branches into a giant pile.  We saw no snakes, scorpions, man-eating spiders or other fearsome creatures.  The temperature peaked at 100, ten degrees cooler than the previous weekend.  I was feeling pretty good about life, when all of a sudden, something large, hard, and heavy crunched into the top of the head.

Holy shit.  It was a tree.  My enthusiastic husband had decided to test his chain saw on some slightly bigger subjects, and my head was the proof of his success.

No one else witnessed the event.  My 16-year old son, who otherwise was a pleasure to be around the whole weekend, reacted to my news that Eric’s tree had almost paralyzed me, with, “What were you doing standing in the way, Mom?”

Grrrr.  This was almost funny, considering the source.

Bubba-mon himself, after a choked-out apology, said, “I’ve got enough on my hands worrying about my own safety without having to worry about yours, too.”  Well, the man had a point, even if that comment was not well-advised 15 short seconds after my brush with death.  He was dripping blood from multiple unbandaged locations already. Lucky he’s so cute and buys me tulips on Fridays. 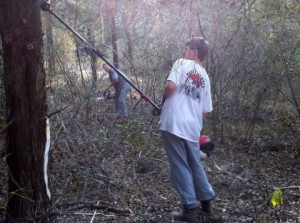 Rarer than Sasquatch, we call this sighting, "Teenager Briefly At Worsquatch."

The next day, he said, “You’re going to write about this like it was a giant redwood.” 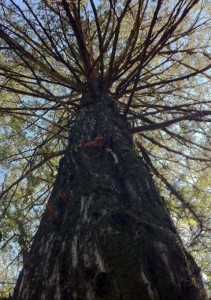 Maybe it wasn't quite this big.

“All that hit you were a few leaves,” he said.

I pointed to the knot on my head.  “Wanna feel what the leaves did?”

He shook his head and tried again.  “I did tell you to stand back.”

“Only with you would 35 feet be insufficient, given the task.”

He relented, and wrapped me in a sweaty hug.  “Maybe it wasn’t a redwood, but it was big enough that I really worried that I’d hurt you.  I’m sorry.”

I had already forgiven him, though, because (and now this really is the 100% truth) I should have known to have stayed a half mile away from my husband when he was operating a piece of machinery that boasted an industrial cutting implement.

We worked diligently on day two with no incident, until Bubba-mon had finally broken both the chain saw and the pole saw.  Clark and I were dying with tiredness and couldn’t believe it had taken him so long.  We would have probably felt better if Bubba-mon had not kept to himself the fact that he knew we didn’t have enough gas in our generator to last the night.  It ran out at 2 a.m., when the temperature outside was down to a pleasant 87 degrees.  Bubba-mon pretended to be asleep as our air conditioner shut off inside the Quacker, along with the generator.  Bad Bubba-mon.   What I really needed after that hot night with a sore head was a cold drink, but Bubba-mon Junior aka Clark had left the cooler open.  I settled for a warm Sobe.

So Clark and I had counted on being on the road back to Houston with a Suburban full of mangled machinery hours ago.  To our horror, Bubba-mon whipped out the clippers and machete, but Clark and I threw up our hands, and he put them away after only 15 minutes of solo chopping.

As we got ready to drive away, Bubba-mon — completely forgetting for a moment the skid loader dig-out that started our work weekend — said, “Let’s try out the new driveway,” and pointed the Suburban into the partially cleared forest.

I didn’t even have time to yell, “Sand!!!!!!!!” much less, “Honey, don’t you think the Suburban might get stuck in all that sand?  Why don’t we wait and try it once we lay the gravel?”

So, day two ended much like day one began, with a massive dig out project.

But, no one went to the emergency room, and really, what other criterion do you need to judge a weekend in Nowheresville by? 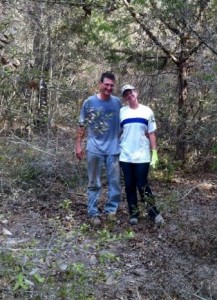 We aren't going to let something little like a giant redwood to the head come between us. 🙂

Have a super week,

p.s.  The repairman is visiting the skid loader today.  I’m sure his house call to Nowheresville will be nice and cheap.

p.p.s. I’m taking the pole saw and chain saw both in for repairs today, too.   Or at least Bubba-mon thinks I am.  😉