That’ll knock some sense into him. 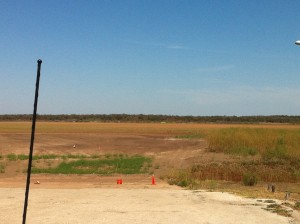 This is the Nail Creek (south side) boat ramp on Lake Somerville. The lake is down 10 feet, and you cannot see water from the south shore. Just thought you'd like to see big time drought.

We had our usual tragi-comedy at Nowheresville this weekend.

You’ll recall that multiple times now we have forgotten keys to the trailer, the gate, and the skid loader.  This time we remembered all our keys, but forgot our suitcase.

I made a round trip Saturday morning back to Houston for the bag.  No tickets, clear roads, and a good Audible book, so I shan’t kvetch.

But our collective brain lapse was a sign of things to come.

On Saturday while I was gone, Eric/Bubba-mon opted against the seat belt in the skid loader.  Bad choice.  He bounced up and whacked his head on the steel frame to the ceiling.  Concussion.  Nausea, migraines, and sleepiness ensued.  He turned down Blue Bell Tiramisu ice cream.  He wouldn’t go dancing Saturday night at the Chicken Ranch Dance Hall.  He didn’t even get out of bed until nearly NINE AM on Sunday morning!  He managed to sneak in a long bike ride, but he doesn’t remember most of it.  {He has PROMISED to wear his seat belt from now on.}

Once he was concussion-compromised, the work part of the weekend pretty much ground to a halt.  Except the water pump and shower head broke — it’s always something — and he repaired them.  And by repair them, I mean that when you turned on the water, approximately 10 gallons a second shot out the overflow valve and onto the ground oustide.  Because he’s a rock star, but only a semi-functional rock star.

We had to make a poo run. 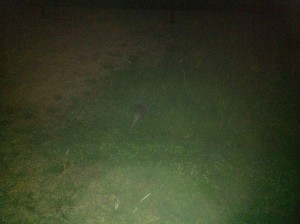 This is what it looks like when a man with a concussion operates the camera. Trust me, that's an armadillo.

The poo run is the bane of Buba-mon’s existence.  It entails transferring the contents of the poo tank into the poo toter, hauling it to the poo dumping station, and making a poo deposit.  Or is that a depoosit?  Whatever it is, with nausea and a migraine, it’s even worse.

First, he emptied the tank into the toter.

“Hey, I think I’m going to open this window, Eric.  The weather is so nice,” I said.

“Uh, probably not a good idea.  I kinda spilled a little when I loaded the toter,” he said, as he re-entered the Quacker trailer after finishing said task.

I took a good sniff of him.  The man spoke the truth. I left the window closed.

So off we drove to Nail Creek State Park at Lake Somerville, where our year round park pass grants us the privilege of utilizing their poo dumping station.  When we got there, Bubba-mon crawled into the back of the Suburban to connect the toter to the dump station.  For those wondering why Bubba-mon was doing all the heavy lifting when he had a concussion, hello, poo is HIS job (see The Redneck Adventures of Bubba-Mon and the Quacker) and only hospital admittance would relieve him of that responsibility.

ANYway, things went well for about, oh, I don’t know, maybe 3 milliseconds?  Then they went something like this:

“Honey, do you smell a skunk?” (Me again, sniffing, gagging slightly)

“Well, I can’t help you if you don’t tell me what’s wrong.”  (Me, super helpful and obviously the superior communicator)

In his haze, Eric had lost his grip on the toter and instead of the poo going out the connector hose, it flowed out the back vent and into the bed of our Suburban.  And all over him.  And the water jugs he brought to fill.  It took Eric about half an hour to clean himself, the jugs, and the back of the Suburban,  from which we, blessedly, had removed the carpet only a week before.

On the way back, I drove, windows down, patting the one clean spot on his arm, and cooing soothing noises while breathing through my mouth.  It smelled like we were hauling a family of dead skunks.  It smelled like New Jersey.  Seriously.  Then I pretty much sponge-bathed Eric in rubbing alcohol and slathered him in neosporin after he showered to prevent infection, because, after he worked in the bush on Saturday, he was head-to-toe open wounds.  How embarrassing for me would it be to have to explain to people that he died from an unfortunate poo mishap?

So, it’s Monday as I type this, and Eric is at work, but he’s still in a fog.  I think a mid-day lie-down is in the works.  I hope he doesn’t read this before he gets here.

Please raise up a little prayer that this experience knocked some sense into him, not just knocked him senseless.

Buckle up, my friends, and, remember, don’t operate a poo toter when impaired,

p.p.s.  Countdown to building a permanet house with a permanent septic system: 2.5 years.