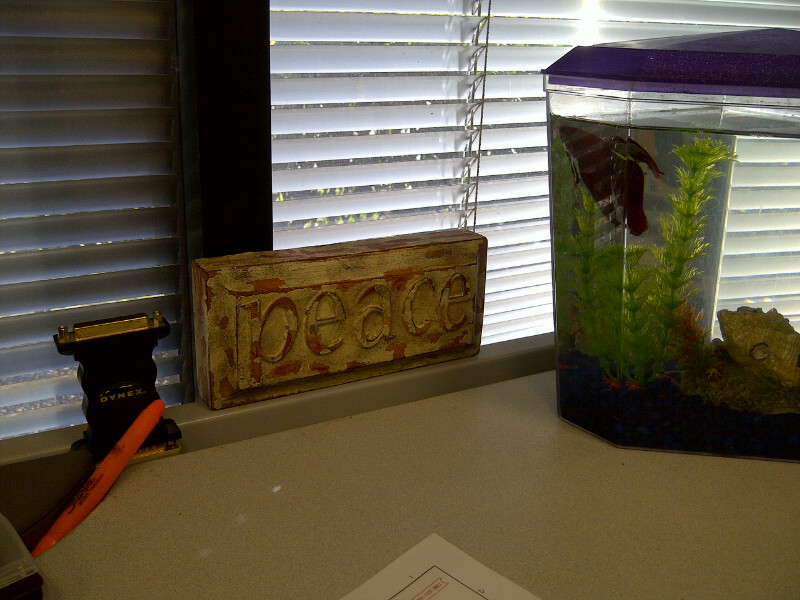 Peace doesn’t flow like a river at our house.  Between kid drama (always), puppy drama, work, finances, and Eric’s and family health issues, peace has dammed up the waterway lately, creating a dark lake of ugh, especially for my husband.

Remember Eric’s abscess, and the upcoming re-root canal?  Several of you warned me that the infections of the teeth are potentially quite serious. That they can impact the heart, the brain, and other organs.   Well, it turned out you were right.

Eric started a new, stronger antibiotic for his mouth, and his endodontist cried uncle and punted Eric to an oral surgeon who couldn’t get him scheduled for two weeks.  Meanwhile, the new antibiotic failed.  It failed spectacularly.

We figured out the antibiotic was not working when we went for a run together a few nights ago.  The endodontist did not prohibit Eric from running, possibly because Eric failed to tell him about the elevated pulse running caused him recently.  I suspect there was also some crafting of the report I received from my husband about his restrictions.

So, back to our run.  My super-fit husband had tremendous difficulty from the get-go.  After two miles, I noticed he appeared drunkenish, weaving, staggering a bit, glazey-eyed.  Our pace was midlin-turtle already, and I knew I had to make him walk.

Except that only a fool would tell Eric to stop mid-effort.  I did that once, during the Hotter than Hell Hundred bicycle race in Wichita Falls in 2008.  Eric succumbed to dehydration (related to a stomach constriction that he later had corrected), and he lurched around at a rest stop.  He caught the eye of an on-site physician, and, with my assistance, the doctor wrangled Eric under the tent for an examination.  Fifteen minutes later he released Eric, and I helped Eric finish the race, which was a first in our athletic partnership, believe me.  Normally I am the parasite, and Eric is the strong, healthy carrier.

I had not used my powers since, although I know — I know well — that Eric hates to stop, feels exercise is critical to his physical health, and uses it to salve his mental health when stress mounts.  And stress had mounted.  A whole heap of it.  The weight of all of it was crushing his usually ebullient spirit.

So, how to get him to stop without making a bad situation explosive?

I slowed to a walk and made a dramatic show of scratching mosquito bites.  Eric slowed with me.

“Are you ready to restart?” he asked, in a spot-on imitation of Johnny Depp a la Pirates of the Caribbean.

“Wellllllll….my feet really hurt.  I’ve been off for five weeks, and this distance is too much for them.  Gotta be smart, build them back up.  I’ll have to walk.”

When in doubt, blame it on the plantar fasciitis. Hopefully the darkness broken only by widely-spaced bayou path streetlights was heavy enough to hide the lie on my face.

Without a word he fell in beside me, holding my hand and unable to talk further.  He stumbled along.  We took a short cut home.  Fifteen minutes later he was no better, so he took his blood pressure.  It read 50% higher than normal, and it’s borderline already.  It was scary high.

I put him in bed with a cold cloth on his forehead, and I snuggled in beside him.  I stroked his face while I considered forcing him to the emergency room.  Eric admitted that his jaw hurt worse, and that his sinuses now hurt (the infection had eaten a hole in his jaw, per the x-rays, and was marching on to his sinus cavities).  We compromised.  If his blood pressure came down significantly in half an hour, he’d instead contact his endodontist for a different antibiotic, let him know of the worsening situation, and enlist his help in moving the oral surgery sooner.  His pressure came down, just enough.

The next morning Eric said he felt passable. He promised to call the endodontist first thing.

I knew he wouldn’t.

Meanwhile I contacted his primary care physician, none other than my father.  Dr. Dad suggested, in strong terms, that I make it clear to the oral surgeon that the time had come to do something.

“Too busy,” he said, snappish.

“Give me the number.”

He complied.  Along with a list of days he couldn’t go.  Then he caved.  “I’ll go today if they can get me in.”

I love him.  I understand him.  I was scared, too.

The endodontist’s office responded with amazing assistance despite my fear that they would dismiss “the hysterical wife.”  Maybe the tremor in my voice as I explained my fears about  his general health  helped secure their help.  The wonderful Tracy with Dr. Ott’s office put me on hold while she raised the oral surgeon to let her know that it was an emergency.  Tracy was back with me in two minutes.  They’d moved the procedure up to four days later.  Progress.

I held for mere seconds.

“Can he go right now?  They looked at his films, and the surgeon is clearing her schedule for him.  But he has to go now.”

“I’ll get him there.”  I left out the”if I have to drag his bloody carcass behind me on a travois” part, but it was implied.

Read the rest of the story in Peace Out, Part 2.

Peace out for now —

p.s. There is a tiny place in me that has to wonder’s if Eric’s health drama was just his shameless attempt to draw notice away from Petey the attention-hogging hound? Nahhhhhh.