Every dog has its day. 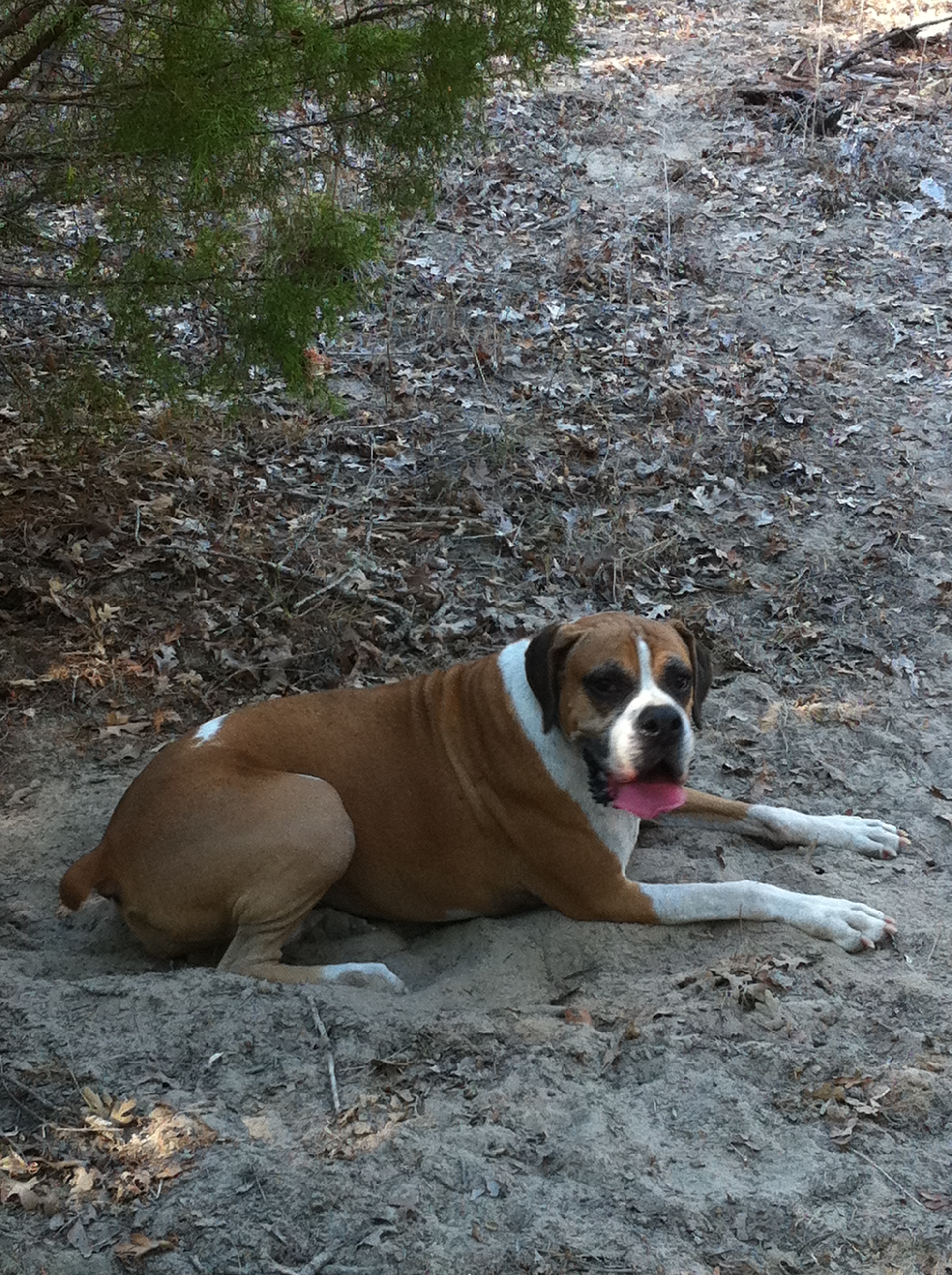 Layla with still-pink hairless skin, while healing. Pictured clockwise from upper left are Little Bear (seated), Callia, Karma, Layla, and Jake. Not pictured: Cowboy. Taken at Bodkins Mill off Scenic Road on St. Croix. Click to enlarge, use Back on your browser to return. How about that tongue?? 😉

Once upon we lived in a big house named Estate Annaly on a hill in the rainforest on St. Croix in the U.S. Virgin Islands.  Our place was remote, so we had need for security.  Enter our six dogs, a Brady bunch assortment like our kids.  Eric brought three:

Jake (cockermation — use your imagination!),

We used to love running along Scenic Road overlooking the dramatic rock cliffs of the North Shore with our six dogs and often a few neighbors’ dogs too gamboling around us.

So what happened to the canine crew of Annaly? Well, Little Bear died of bee stings on St. Croix, sadly.  When we moved to the states, our nanny kept Callia and our house sitters kept Jake.  Karma came with us, but has since relocated to a country home with a new family.  And you’ve read about Cowboy, if you follow this blog. He’s pretty popular.

This story isn’t about any of them.

It’s about Layla.  Sweet Layla the boxer who has the misfortune to look like Gollum of Lord of the Rings.  It’s the story of how she returned to us from the dead.

When Layla moved into Annaly, she was only about six months old.  St. Croix, unfortunately, has an underground dog fighting community.  As a female boxer, she was a sought-after sort of dog on the island — a young bitch who could mother fighting pups.  We came home one day to discover she was gone, had simply vanished.  We put fliers up all over the island offering a reward for her return, but we had no luck.  After a few weeks, we sadly accepted she would not ever be coming back.

Four months later, we got a call from the Animal Shelter, one of the places  where we had handed out fliers.

“I think someone brought in your female boxer, that one from your flier last summer, but we can’t be sure.  She’s pretty far gone, and we are planning to put her down.  Do you want to come in and see her before we do?” the Shelter volunteer asked Eric.

Did we?!?  We jumped in our big Chevy Silverado truck and practically flew over the giant tire-eating potholes on our way down out of the rainforest and into Town.  When we came to an abrupt, breathless halt 20 minutes later, Eric turned to me.

“Why don’t you wait in the car, just in case?”  He cupped my cheek in his hand.

“Yes,” I said, then felt weak for agreeing.

But the woman from the Shelter had warned us that Layla — if this was Layla — was not only barely recognizable, but that her skin was practically hairless and weeping with open sores.

Eric went off to view the dog.  I could see him from behind.  He crouched in front of a mobile kennel, reached out his hand, and I saw a big pink tongue, but could make out nothing else in the dark opening where the dog lay.  Then Eric turned back toward me, and I saw the tears on his face.

It was Layla.  I got out of the car, feeling nauseous and crying, too.  I walked over and stood beside him.  I would not have recognized her.  Eric barely had.  But she had recognized him, and with what little strength she had remaining, she had lifted her head, whimpered, and reached for him with her oversized tongue, the tongue we loved and laughed about that reminded us of a vintage Rolling Stones poster.

Thirty minutes later, we had transported Layla to our veterinarian against the advice of the Shelter.  Layla had mange, a condition we were told she was born with but one that was easily treatable had someone sought care for her earlier.  Instead, she had been dumped in the road in the center of the island and left for dead.  A goodhearted soul had braved her oozing sores to bring her to the Shelter, even knowing it might be hopeless for her.  Now, the mange was so far gone that she was barely alive.  We had decided to let our vet Dr. Hess make the call, though.  If he thought he could save her, we would let him try.

It took many weeks of intensive treatment to get her well enough to leave the clinic.  We visited her daily in the meantime, and tried not to look at the credit card receipts when they ran our card.  At first she was wrapped in gauze like a mummy. Her walk was stiff-legged and slow. But her tail never wagged nonstop she saw us.  Layla had never wowed us with her beauty, but now she was scary ugly, a skinny, hairless,  pink-skinned waif who still had silver-dollar sized open wounds six weeks later when we brought her home.   Worse, she had lost her ability to play.  She was a serious, cowed animal, in a seeming state of perpetual confusion about the intentions and conditions of the world around her.

When the time came to move to the states, Layla flew ahead to Auburn to live with Eric’s oldest daughter.  But soon she was kicked out of the daughter’s apartment complex, and Layla moved to Texas where she has been with us ever since.

Layla lives the good life now.  She is the devoted partner/companion of Cowboy, and the two of them behave like an old married couple.  She hasn’t gotten much prettier, she never figured out how to play again, and she is very, very afraid of men, especially men with dark skin, leading us to imagine her former captors.  But she has for the most part overcome four months of hell and two months of pain to become a loving and normal dog.

She is my running companion and our protector.  When a dog came after me while I was running with Layla in Nowheresville, she grabbed it by the neck without a sound and had it inert on the ground before I even knew I was in danger.  When Cowboy growled and snapped at our one-eyed Boston Terrier puppy Petey a few weeks ago (after the eye injury), Layla abandoned her normal quiet and leaped on Cowboy’s back with a ferocious snarl and chased him out of the house, biting his behind the whole way.  Cowboy has treated Petey like a favorite buddy ever since.  Go, Layla! 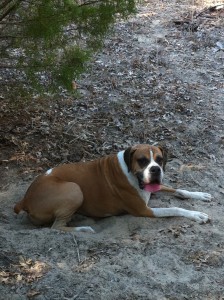 Current picture of our Layla, taken in her favorite place, Nowheresville.

Layla.  Survivor of a violent kidnapping, abuse, and neglect.  Left for dead.  Our muscly little protector who likes you to whisper sweet nothings into her oversized ears as you pet them.

I think there is a special place in hell for people that hurt children and animals, and I hope her abusers find their way to it.  And I also believe there is a corresponding place in heaven for people that give their time and love to those who can’t take care of themselves.  We will always be grateful to the kind person(s) who rescued Layla, six years ago.  Maybe someday they will read this and remember, and smile.

Running buddies. And don't mock me -- those are compression socks, and they are not only expensive, but they work (injury prevention and recovery).