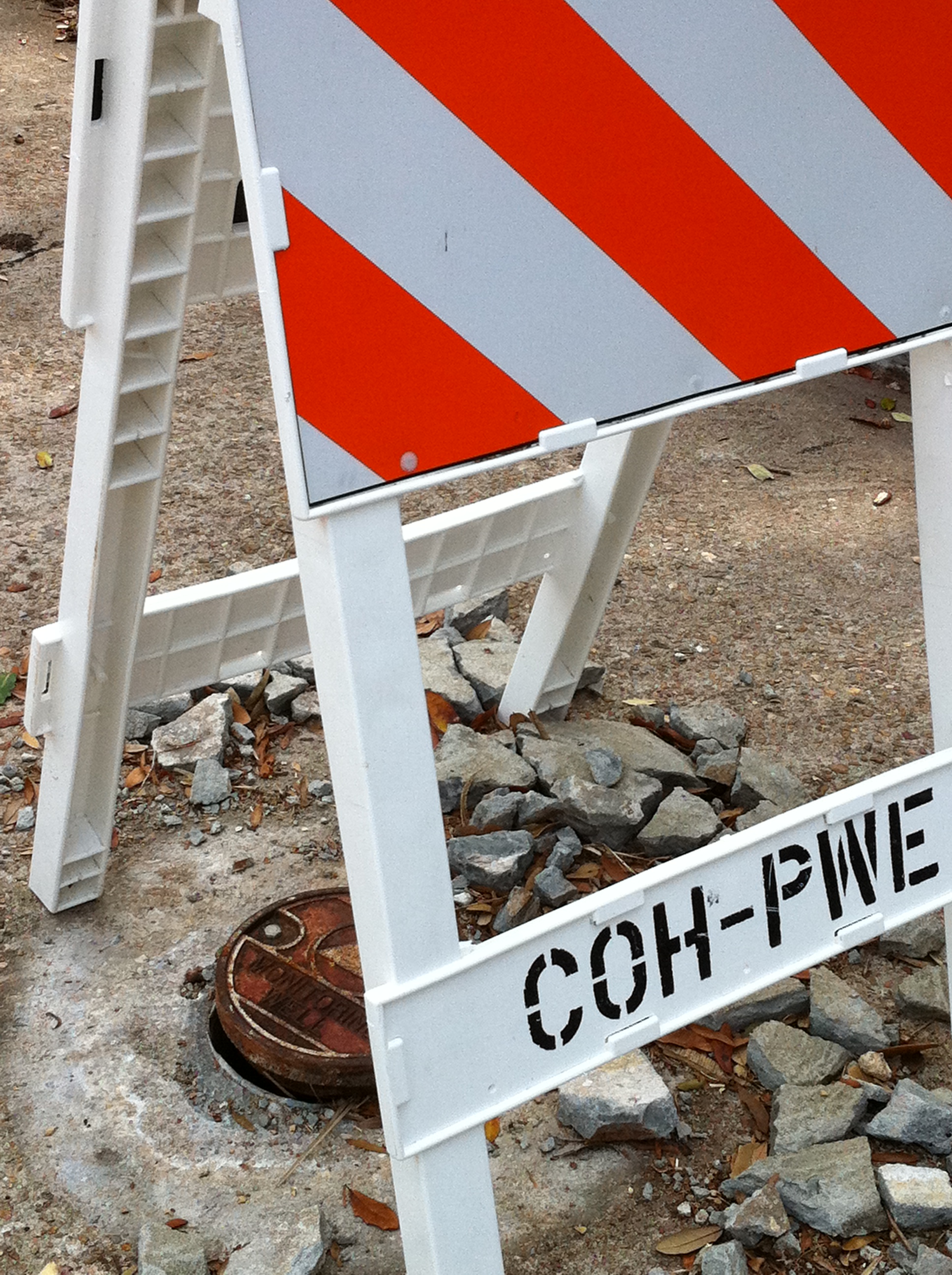 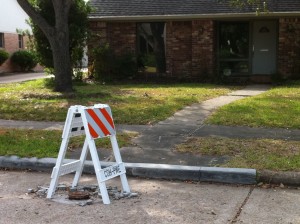 I prefer to take a positive approach to solving problems, but after four months I am positive nothing will ever be done unless I raise a negative stink.

Update: Roughly 24 hours after I posted this, the COH PWE completed the work repairing the road in front of our house.  They did a good job.  They were super nice, even if a little terrified of me at first.  And, I do mean they.  Although I only met one of them (Ernest), my contractors met at least one of them, too, and the contractors and I can attest that at one point there were five people out in the street.  So, to those that worked together to solve the problem, I tip my hat.  Thank you for working in the cold today, and for doing a nice job.  <3 Pamelot 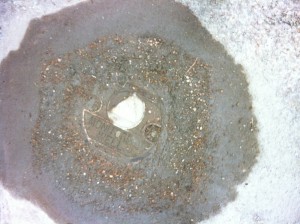 That is drying concrete, with the monitoring well label showing flush with the street. No hump, no two inch protrusion. Nice job.

Let’s call today Us versus the Man.  The Government Man.  Although so far I’ve mostly dealt with the Government Woman, I trust you get the picture.

Hello?  City of Houston, is anyone home?  We’ve called five times in the nearly four months since your “monitoring well” (COH: “Monitoring what?” Us:  “How the hell should we know, it’s yours not ours.”) erupted from the pavement in the road in front of our house during the major grounds shifts that occurred during the Texas drought this summer.  Each time, we re-explained the story as we were asked the same questions.  Each time, the Public Works & Engineering Department sent another worker out.  The workers were unfailingly polite, and completely without a clue.  They took pictures on their mobile phones and promised us that someone else would come out to fix it…because they had no idea what to do.

So far, placing their saw horse with “COH PWE” is all they’ve done, and they did that three months ago.

Nevermind, COH, we didn’t really want to park a car in front of our house anyway.  And we don’t mind if people knock on our door and ask why we haven’t had it fixed yet.  It’s no bother.  Maybe we should sick the Meyerland Community Improvement Association on you.  Or KHOU news.

Or we could remove your saw horse and let someone blow a tire out on it and sue the city.  But then a little old lady might trip over it.  Or worse.  We could have another Baby Jessica and the Well situation.  OK, maybe not quite that bad.  It’s ridiculous, though, and we are fed up with it. 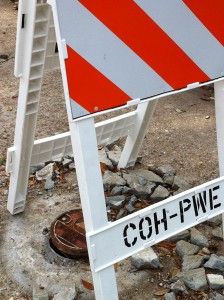 What’s a girl got to do to get the COH PWE to fix their shit????

p.s. If you are with the COH PWE, you can reach me at pamela@pamelafaganhutchins.com.  When this post had been up only 30 minutes, my software already identified ten hits from people at URL’s within the COH on this blog.  But no one has contacted me to find out more or to fix anything.  Not impressive.  I didn’t put this blog up as a curiosity.  I put it up in hope someone might recognize a responsibility to do their job.  Oh well, maybe it will be forwarded to that type of person eventually.

p.p.s.  I emailed this link to the PWE Director, along with my address and detailed contact information.  Now, I guess we sit back and wait to see what happens. 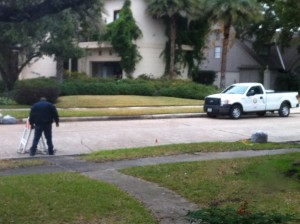 Shown from the back because I don't want to use his image. He is the nice guy who came out. Although he appears to be afraid to ring my doorbell. 😉 The other four came to the door, and I was very nice. As I was to every single City PWE employee I spoke with. But, I guess I'd be nervous, too, if I were afraid to end up publicized.