At least we’ll always be able to find it. 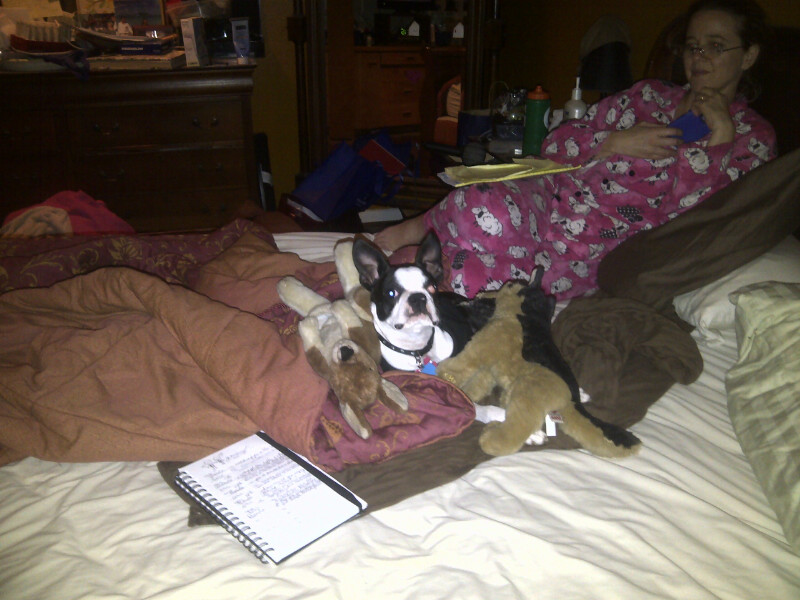 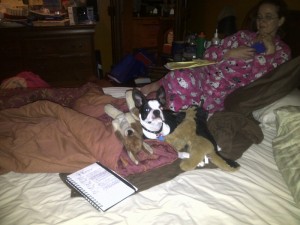 Last week Petey the one-eyed Boston Terrier went under the knife for the snip-snip. The nip-and-tuck. The neutering.

Why, you may rightly ask, would we do this to our sweetie Petey? Well, we got this feedback when we boarded him at the super awesome Polka Dot Dogs here in Houston two weeks ago: “Your little darlin’ is trying to become a father and has his [one] eye on that chihuahua over there. And the cockapoo. Oh, and also the maltese.”

Pooooooor Petey. In his defense, he told me all three were super hot little bitches.  And he loves Polka Dot Dogs. Instead of kennels, they let all the dogs of similar size and temperament play in open rooms together. He’d like us to take him along wherever we go, but, if he can’t go with us, he prefers PDD.

PDD, however, has a policy. At the age of seven months, little boy doggies no longer get to stay in open room boarding if they can’t keep it to themselves. While I think anyone would be lucky to get the bonus of little Peteys along with the price of their boarding, I guess I can accept this.

So, Petey visited his very intimate buddies at the vet. After three months of eye treatments, they know and love him. After neutering my poor baby, they know him even better. Before the procedure, they asked me if I’d like them to put a microchip in Petey, in case he ever gets lost.

I called Eric. “Do we want Petey to have one of those Pet Finder microchip thingies?”

Eric said, “Sounds like a good idea to me.”

“Okey dokey. They said they can put one in when they remove his you know whatsies,” I explained.

Eric paused. “Wait a second. They remove his you know whatsies and put the chip in the space left behind?”

“I didn’t ask, but that sounds likely, since this only came up because of his procedure.”

“So he’ll have a tracker in his ball sack??”

“I wouldn’t have put it quite like that, but, yeah, I guess that’s about right.”

“Well, I guess we’ll always be able to find it, then,” Eric said.

Ew. If we ever wanted to actually know where it was. Other than between his legs, I mean. I’m thinking this microchip may tell us a little more than we really wanted. Plus, whatever happened to the right to privacy? What do we do when Petey starts dating? Or God forbid, if he marries? Wouldn’t it be enough of a challenge that he couldn’t father little Peteys without his anxious parents tracking his every move with his beloved? This is a little more intrusive than, say, a GPS tracker in a car, which I’m not above installing in my kids’ vehicles if they deserve it. But a ball sack tracker? Could I do that to him?

As I pondered the horrors, Eric broke into my reverie. “I’m kidding, Pamela. It’s a good idea. It’s fine. I’ll bet they don’t even put it there. They probably just use the occasion of anethesia to tuck it in somewhere else.”

I exhaled. What a relief, because I was pretty sure that wherever they were going to put the microchip, it was a done deal by now.

Later that same day, I picked up our Petester. Oh, what a pitiful sight he was, head hanging, eyes downcast. He seemed awfully low, even for a dog who had lost his manhood. I paid and whisked him to the car, whispering supportive and encouraging words in his ear about his bright future and the long line of female dogs who didn’t give a rat’s ear about puppies, citing to our own Layla and Cowboy as an example of devoted and puppieless partners.

Nothing worked. I just couldn’t cheer him up. We were almost home when a cold dread seeped over me.  I pulled to the side of the road and put the car in park. I knew even before I carefully searched his 16-pound body for a microchip incision what I would find — nothing.

The only point of entry? Yes, you guessed it: the poochy pouch. Little tears of guilt welled up in the corners of my eyes. I stroked him and begged for his understanding and forgiveness. This appeared to mollify him a bit, and I headed for home.

As I was making dinner that night, my daughter Susanne came in. “I guess that surgery didn’t work. Petey’s humping his stuffed German Shepherd.”

A few minutes later my son Clark swung by. “What a stud, Mom. Petey’s giving it to that kangaroo. Didn’t he just get his balls chopped off today?”

When he walked through the door, Eric exclaimed, “Wow, Petey, you aren’t letting a little pain stop you, are you?”

I could only imagine. As I pondered his actions, even I had to admit it. Our Petey is a total slut. Maybe the vet put the tracker exactly where we need it to be.