Echoes of a Past Life 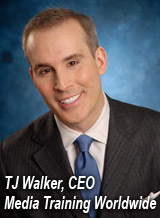 Once upon a time in another life, I had a real job. Not that I don’t work now, but it’s pretty hard to convince people I have a real job when most days I sport PJ’s until I hear the dogs barking at the side door, alerting me to my husband Eric’s arrival home from his real job and leaving me mere seconds to transform from my happy-but-haggish self to almost-put-together office-at-homer. In that old life, I was the Vice President of Human Resources and Legal for a refining company in the Caribbean. I wore Ellen Tracy suits, Puerto Rico-high heels, and (sometimes) makeup. I dispensed justice from my large office. People said, “Yes, ma’am,” to me, and gave me stock options.

Unfortunately, I hated it. I liked some of the people I worked with a lot, though. In fact, one of them I liked so much that I quit my job and married him (yes, Eric). But, even though I am so much happier in my new life, I experienced some amazing things in that old job.

One of those amazing things? Media training. That’s right. Media, as in TV, radio, and print. We brought in from New York to our little island the awesome T.J. Walker of Media Training Worldwide to work with those of us who had communications responsibilities. I was a member of what we called the Incident Command Staff, and I filled its Communications Officer role. That meant that in the event of a crisis, my ass might end up in front of a camera taping me talking to a slick reporter. Yikes. Luckily I never had the misfortune to need the skill in an emergency, but I put it to good use in day to day public relations on behalf of the company.

It certainly comes in handy now when I’m appearing publicly or giving interviews for the books I’ve written. I did a radio show (blog coming soon) and gave four print interviews. By the way, as you can imagine, print is way easier than live radio or TV.

You can read the rest of Echoes of a Past Life by Clicking Here.