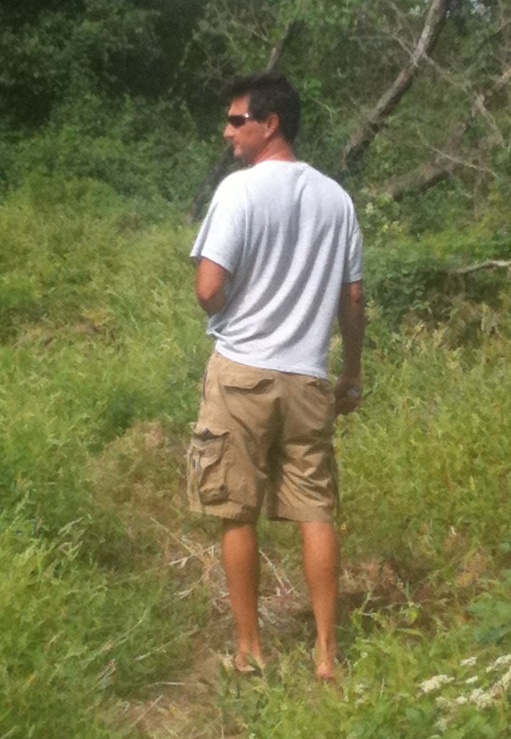 An adated excerpt from the book Hot Flashes and Half Ironmans, reprinted with permission from SkipJack Publishing. 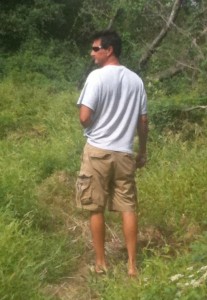 Inspecting the damn pond, or, rather, the pond’s dam. And looking pretty cool while doing it.

My super-athletic husband is a native of St. Croix. Yah, mon. When we moved to Texas, he had to learn some Texas tricks, and this old dog didn’t want to. It took a lot for him to find his inner Bubba-mon.
When we had lived in Texas less than two years, Eric and I celebrated our anniversary in Fredericksburg, a charming hamlet chock-a-full of German history in the Hill Country of Texas. Like anyone would, we planned our entire getaway around bicycling and running. However, given the fact that we’d just run the Texas marathon days before, it was very moderate bicycling and running.
We were in the heart of Texas deer hunting country, and it just happened that we were smack in the middle of deer hunting season. As we drove into town, Eric put on his thickest, most sarcastic drawl and estimated the IQ and body weight of each thermal-camouflage-clad, beer-bellied hunter we passed. We pulled up to a gas pump, surrounded by converted SUVs and ATVs tricked out with gun turrets and swiveling Lazy Boys in their hacked-off back ends.
Eric put the car in park. “You’re going to have to pump the gas.”
Not to be a princess, but, “’Scuse me?” My husband never lets me lift a dainty little finger if he can help it. He’d have to be vomiting up a lung to ask me to pump gas.
He gestured at his bare legs and running attire. “I can’t go out there like this.”
To read the rest of this story (one of my favorites), CLICK HERE to go to “Just Jules” fantastic blog/website. And, while you’re there, check out some of her other posts. She tweets as @momcycfan, too.
Pamelot
Please follow and like us: