Well, it was a big weekend out in Nowhersville. Eric and I had a lot on the agenda. I needed to get the sequel to Saving Grace to my editor. Eric read as fast as I wrote, editing and offering suggestions. Meanwhile he had day-job work, and I had to shepherd Saving Grace though pre-release issues, which are never-ending.

But we left time to have some fun, and I ain’t just talking about the Arizona Cardinals on NFL Sunday ticket (although that is a given, out at Nowheresville). We went on a fairly pricey shopping spree, partially inspired by the gorgeous new slab that is ready and waiting for a barn to be mounted upon it any day now.

So off we scampered on Saturday to look for a used tractor. It took us only one hour to find the perfect brand-spanking new Boomer (35 hp) New Holland, thank you very much, and you don’t want to know what it cost. Eric really, really, really loves it. He caved for the five-foot “Bush Hog” attachment, and has his lusting eyes on a chipper and a posthole digger. Looks like shopping will be easy for me, this next Christmas and birthday! 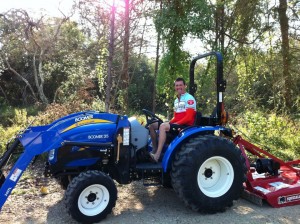 Then we pointed the trusty Suburban toward Independence, Texas, following the directions on innumerable billboards to “Independence Firearms,” aka “Ammo To Go.” Now, I had never shopped at a gun store before, much less a destination gun store. Thus, I had no idea what to expect. If I had, I might have stayed at home. Or maybe not.

The experience started at the entrance: a giant pistol out in the middle of nowhere on a country road. The store itself was immense, a series of interconnected metal buildings covering nearly a whole acre. Trucks with lift kits filled the parking lot. A Tea Party rally sign rippled in the wind. 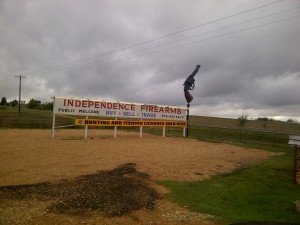 “Really. I want you to have something for when I’m traveling, like for snakes, or wild hogs.”

“And to keep in the house.”

In general, I’m not a fan of guns, especially in the years where we had kids in the house. But in Nowheresville, we have no kids, and I will be alone out here a lot. When we were in St. Croix, I had a flare gun. But here I’d have THE REAL THING. Which kind of terrified me, but I didn’t say so, because if this gun was going to be mine, that meant I was about to get to pick it out. And I LIKE to pick things out.

We walked in the front door and a super happy young man in a cowboy hat and with a red handlebar mustache ushered us in the door. We were surrounded, floor to ceiling, wall to wall, with guns. Big guns, little guns, cute guns, scary guns. Guns, guns, guns. It was overwhelmingly gunny, in fact.

When Eric told him what we wanted, he said, “20 gauge? I’m not even sure we have that in a tactical model.”

“Not tactical. It’s for her.” Eric pointed at me.

It was at that moment that I realized why we were buying the gun for “me.” It was because it was OK for me not to know shit from shinola when it comes to guns, but Eric might get his ass whupped in here if he displayed the true level of his ignorance. Just about nobody legally owns guns in his Virgin Islands homeland, so Eric never had. Never hunted pheasant, never shot a deer, never got drunk and pulverized beer cans on a Saturday night. Which is just one of the many reasons Eric sticks out like a sore thumb in Nowheresville, but cheerfully so. He could ‘fess up to his ignorance at the tractor store. It was slightly less disturbing in these parts to be a tractor virgin than a gun virgin.

“Ooooooooh,” our red-headed cowboy friend said. He took a step to his left and gestured to a row of less fearsome shotguns, fronted by a pink camo one. “This here’s a youth-friendly size, so I think it would work real well for her.”

I said, “Are you sure you can shoot it if you have to, honey? Or do we need to get you one, too?”

“It matches my bike. Maybe I could carry it with me for when some Bubba tries to see how close he can come to me with his big ass truck.”

Howdy Doody jumped in. “You can put you a swivel gun mount on your handle bars. Then just swing the barrel like so,” (he swung the pink gun and sighted it)  at ‘em, and you’ll be speaking in a language they understand.”

The red headed redneck spoke again. “You can pull the plug out here if you want to load more than three shells.” He attempted to demonstrate the action of “unplugging.”

POW!! PING!! SMASH!! The plug and a spring shot out of the gun at the ceiling like a, well, bullet.

Eric and I hit the floor along with everyone else in the store, a diverse group that had everything from tattoos to crosses around their neck, piercings to golf shirts, military haircuts to long hair, and even a few in Junior League appropriate attire [I must say I saw an awful lot of Texas A&M shirts…], similar only by the gun lust in their eyes.

Howdy Doody winked at us and calmly reassembled the gun. “That never happens when I do it with my pocketknife while I’m out duck huntin’. Except I’d never do that, because you’re not supposed to.”

Slowly we stood up, but inched further away from the opening from whence propellants had recently propelled.

He said, “Y’all have any wild hog problems? Here’s my number. If you’ll let me hunt ‘em on your land, I’ll kill ‘em for free.” His eyes twinkled like Old Saint Nick.

I stuck my hand out eagerly. I do not have a love affair with the hogs. They skeeeeeeeer me and they can rototill our entire 16 acres between sundown and sunrise. They also procreate faster than rabbits.

He added, “Call me soon, though, because I leave for the Army in January.”

This made complete sense to me, and I’d only known him five minutes.

He looked down at the paperwork he was filling out for us while he continued talking. “My family has a military and law enforcement tradition. It’s all I’ve ever wanted to do. My parents made me go to college first, though. When I got my bachelor’s degree, they still begged me not to join the Army. Now that I have a master’s degree I told them I am done, and I am going in.”

Eric and I shared a look. We had been guilty of judging the book by its cover. And by the shelf it was on. It was an easy mistake to make in here, but I still felt guilty.

“I’ve been managing a ranch out near Nowheresville these last few years, but I get to come in here on Saturdays, just for fun.” He raised his hand to high five a customer walking by. “Y’all need anything else, now, you come back in on a Saturday, and I’ll fix you up.” 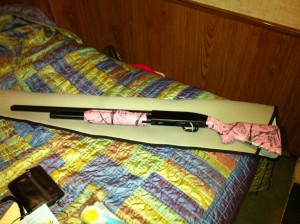 And so we left the paradoxical world of Independence Firearms and headed back to our beloved Quacker and newly beloved Boomer the tractor, to shoot beer cans in the twilight. A perfect Texas Saturday night.