The Goatses With the Mostest

The Goatses with the Mostest? Sorry about the title. It was the best I could do. It’s a tongue-twitter. Try saying it three times fast — I felt like Gollum of Lord of the Rings when I tried. {You’re trying right now, aren’t you??}
So Eric and I took two weeks off sans offspring over the holidays, and it’s taken me THIS LONG to dish on it. The real pisser is that there isn’t enough ginko biloba in the world to help me remember the messy details.
Suffice it to say we went to Nowheresville, where we celebrated Christmas in SCALE. 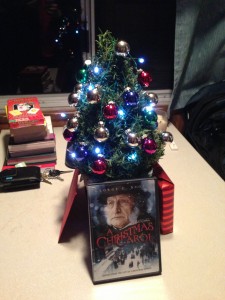 Quacker-sized, with a rosemary plant for a tree.
It was also quite cold, down in the 20’s each day. 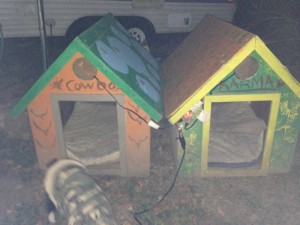 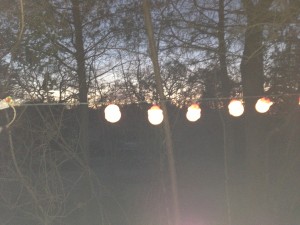 Use your imagination — those are Santa Head lights hanging from the trees.

Besides celebrating the season, Eric and I were in the sticks to turn our little slice of heaven into a goat ranch. On a modest scale. We spent two days building a one-acre enclosure with a four-foot, electrified goat fence, which Petey tested for us. Twice. Poor Petey-poo.

So it took us two days, one day to do it wrong, and a second day to fix it. That’s what we call LEARNING around our house, and we *don’t talk about it* when it happens. Ahem. Then we rented a trailer and fetched our little herd of hoofers and brought them to their new home. 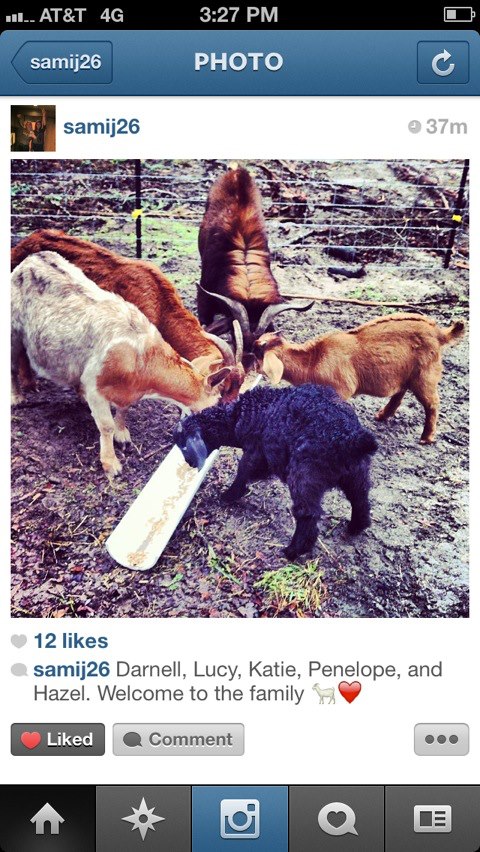 Here they are being all famous on my daughter’s Instagram account. Darnell is the massive billy in the back of the picture. He’s so impressive that Eric was forced to name him after Arizona Cardinals defensive superlineman, Darnell Dockett.

The goat is a serious badass. But a bottle-fed badass who insists on behind-the-ear scratches (Sorry, Mr. Dockett, I mean the goat, not you). Eric was covered in bruises from those wicked horns, which Darnell used to gently guide Eric to the right spots to scratch. Darnell also stands his 125-pound frame on his hind legs and cocks his head to look you in the eye. Which is terrifying, because it’s the stance of a ram about to, well, RAM you. He doesn’t, though. He’s just an overgrown and very social baby.

Darnell’s job is to protect Lucy (the red nanny), Hazel (the tan nanny), Katie (the lovely red kid who Eric named after Katie in Saving Grace, LOL), and Penelope (the curly-haired black kid). He’s done a damn fine job in his first few weeks. The whole herd has done a great job, as a matter of fact. They’ve whacked some serious brush, and, on top of that, they netted us an Agriculture Exemption!

I say, “Go goats.”
After a week of country bliss, we packed up the car for our anniversary trip to…
…a place I’ll enjoy telling you about next week.
Pamelot