The Notebook, Eric and Pamela Style

Eric and I recently celebrated a wedding anniversary. Romantic sap that he is, he got me a gift. A gift so perfect and significant that he had it rush-delivered, internationally. 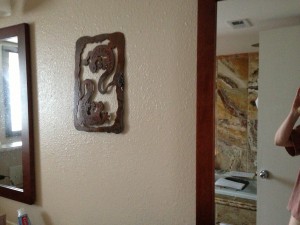 It arrived during our holiday travels, after much gnashing of teeth by Eric and lengthy calls with FedEx,  who did not deliver it sans signature as he requested. Finally, Eric got them to drop it at a FedEx location and we went to pick it up.

He practically gushed. “Don’t you love it? I knew you’d love it. When I saw this, I just knew.”

I held my breath for a moment as my mind whirred and clanked. He had to have a reason that he thought this particular objet d’art was the only gift for me. The faulty engine in my head ground to a shuddering halt, with no answer. So I smiled my biggest smile and said, “Absolutely. Thank you, baby.”

Two weeks later, after I regretfully hung it on our bathroom wall in the space previously graced by a beautiful, colorful wooden shadow box of non-flaky butterflies, I took the picture, above. And it was only after I took the photo that it hit me.

Geckos. I crazy-love the geckos who prance on our sliding glass door a few months of each year, the bachelor gecko who found his woman, and two became three. I wrote about it in a damn book, for goodness sakes. This was Gecko Boy and Gecko Girl.

OK. And suddenly I loved the flaky metal geckos and realized they were THE perfect thing to balance our bathroom mirrors on either side.

So three weeks later, I received a card in the mail from Eric. He sent it while he was in India, but he’d been home for two weeks by the time I got it, plus the three others he sent at different points during his journey. 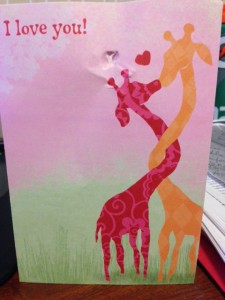 Don’t mind the puncture mark. That’s just where Cowboy the big yellow dog helps the mail carrier get our mail through the door slot every day. It keeps him young, so waddya-gonna-do. 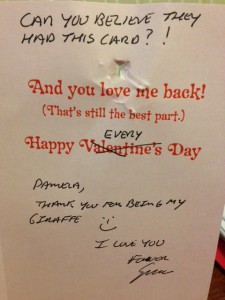 I can’t lie here. When I read, “Can you believe they had this card?!” I thought, “Not really, because it’s kind of ugly.” (Sometimes I’m secretly not very nice, but it doesn’t count if you don’t say it out loud, shhhh) It was just a funny pink giraffe card, for Valentine’s Day. That came two weeks late. Or early, depending how you looked at it since it wasn’t even Valentine’s Day yet.

And “Thank you for being my giraffe?” We’d never called each other little giraffe pet names. My neck is not freakishly long and graceful. He hadn’t compared any of me to any of a giraffe, or him either. WTH?

It wasn’t until hours later, when I picked the card up for the tenth time, that I got it. Of course! The Jamaican kissing giraffes that we bought as our Thanksgiving souvenir, only two months ago. The same giraffes that were sitting in our living room 15-feet away from me at that very moment.

So at this point, I came clean with Eric. About all of it. The gecko bewilderment. The giraffe muddle. My brain nothing but old rusty parts. It wasn’t him, it was me.

And he laughed, he howled, tears rolled down his cheeks. I laughed, too. But, somewhere deep inside, this man has got to be panicked. Because someday I will surely tell him “I told you so,” when I’m in a home for people with Alzheimer’s and he’s reading me one of my books over and over trying to spark a memory of us and we die together in bed at the same time and our heirs make boatloads of money off the movie.

I would say I told you so, if I could remember the gecko and giraffe incidents, that is. Which I won’t.

Until then, more ginko biloba, please.