I think that’s what they call an “oh shit” moment. 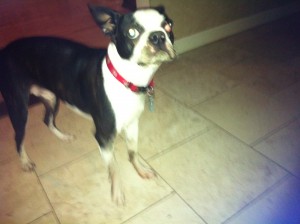 Really, I’m not nuts. It was all the Boston Terrier’s fault.

So, recently I did a phone interview with the Lubbock newspaper (which resulted in a great article). Since I work from a home office, I was home in my jammies for the call, with our three noisy dogs. I always set my alarm when I’m home during the day, with the motion detector off.

I am obsessive about setting the alarm, in fact. We live in a nice neighborhood, but there are occasional day time home invasions. My dogs aren’t going to let the boogie man get me. Still, I want my alarm. It would be nice to have the boogie man run the other way instead of making my dogs put themselves at risk.

Some of our doors are wired for “instant alarm,” though, as is our motion detector. That means that if you open the door or set off the motion detector, the alarm sounds, without giving you time to punch in the code to disarm it. You have about fifteen seconds after the alarm goes off to punch in the code and press CANCEL. If you forget to press cancel, you get a visit from the popo. If it happens more than once, the city charges you $75 per false alarm visit. As the queen of thrift, my whole family endures me yelling, “Did you press cancel?” each time one of them accidentally sets off the instant alarm. I’d never forgotten to press Cancel, myself, until this year. In the space of two weeks, I did it twice. SMH, FIP.

And then came the day of my interview with the Lubbock paper. In the midst of trying to sound intelligent and “together” for the journalist, the instant alarm went off. Panic surged through me. My heart pounded in my ears and my brain froze. Not while I was on this call! Was a door open? With half my mind in Lubbock and half on my blaring alarm, I rushed first to the control panel and typed in our code to make the hideous noise stop.

Now the dogs were keyed up, barking at shadows. I sprinted through the house checking doors. None were open. A small part of my brain registered the issue: I’d accidentally left the motion detector on, and between me and 200 pounds of canine and one ten-pound cat, someone had triggered it. Crapola.

I shook my head to sling out the distraction and continued my interview. And it went really well. So well that we talked for 45 minutes instead of 15. Just long enough for a police cruiser to pull to a stop in front of my house. At first, I assumed they were there for a neighbor, or pulled over to make calls or do paperwork. Until the officer starting walking toward our front door. The journalist was in the middle of a story, and I couldn’t interrupt him. The doorbell rang. Loudly.

“Just a moment,” I said, my voice sounded strangled even to my own ears.

I hit mute and opened the door. Recall that I’m in my jammies. It’s noon. My hair is a fright. I can’t remember if I’ve even brushed my teeth. I look schizophrenic. I didn’t have the presence of mind to restrain the dogs, and they surge outward toward the police officer. The last time I incurred a false alarm, the female officer was less than friendly, and I cringe and try to call the dogs off.

“I’m on a newspaper interview and I forgot to disarm the motion detector and the dogs set it off, and I was so panicked about the interview that I forgot to hit cancel and I’m so sorry and as you can see the dogs won’t let anything happen to me and I have to get back on this call or the journalist is going to think I’m rude when really I’ve just lost my mind, and I have him on hold,” I blurt out in one breath.

The young cop is Asian, medium height, and a small-to-medium build. He was smiling. He was backing away. He is an angel. Or I scared the bejeebers out of him. “No problem. I understand. You have a nice day ma’am.” I prayed that he wasn’t rushing off to call for a psychiatric pick-up, and that he really believes my explanation.

I waved goodbye in my sanest manner and dragged a squirming, yapping Boston Terrier back inside, pushing the 120-pound bass-voiced yellow lab in front of us. I took a deep breath, smiled like it could be seen in Lubbock, and clicked back to my call.

It’s all in a day’s work around here. And the bill from the city for the incident came in the mail today.

Have a great week,