The first to go.

“Give that back,” she demanded. She had come with her friends to play by the rail yard in town, not to be teased by this slightly pudgy older boy.

“Not until you say you’ll be my girlfriend,” he replied.

“I will not,” she declared, crossing her arms across her chest.

“Then I guess it’s my hat now.” He held it behind his back, taunting her.

With a toss of her hair, the girl — Udie to her friends and family — was the first to go. She began her long, stubborn march home without her hat.

The next year, Udie saw the boy again, this time driving a Model-A, bare foot sticking cockily out his window. She remembered her hat, and fumed. But the boy was looking better. She wondered if he’d lost the baby fat he’d still carried last time she saw him.

Three years later, that same boy asked his older brother to borrow $20 and a car.

“So I can take Lura to Chickasaw, Oklahoma tonight and get married.”

“Isn’t she a little young for that?”

“That’s why we’re going to Oklahoma.”

“You gonna pay me back?”

“Well, I guess so, if the marriage works out.”

He and his bride Lura made it home in time to sleep in his bed in his parents’ house that night. They woke up the next morning.

“Why don’t you make me some breakfast before I go to work?” he asked, kissing her on the forehead.

Lura stiffened. At her house, her father made the breakfast for her mother and family, and had done so every one of the 16 years of her life. And it was 1934 after all. Joe couldn’t be serious. “What did you say?” she asked.

“Make me some breakfast. I have to get to work.”

Lura’s eyes filled with angry tears. Was this what marriage to Joe was going to be like? She leaped out of bed and grabbed her clothes. She pulled yesterday’s wedding dress over her head and jammed her arms through the sleeves. She stomped out of the room, the first to go.

“Where are you going?” Joe called after her.

No answer. Down the hall she marched, through the kitchen, and right out the door.

But Lura just kept walking, all the way back to her parents’ house. She crept into the house.

Her mother clutched a hand to her chest. “Where have you been, young lady? We’ve been worried sick about you!”

Lura walked straight to her mother and threw herself into that familiar pair of arms, against the warmth of that beloved chest. “Oh Mama, I made a horrible mistake. I went and married Joe, but he told me to make b-b-b-b-…”

“What did he tell you to make, honey? What is it?”

“BREAKFAST,” Lura wailed. “He told me to make his breakfast.” And she sobbed against her mother’s shoulder.

“Oh, Udie.” Her mother didn’t know whether to be scold her youngest daughter for eloping at her age, or to laugh at what she’d just told her. “Udie, Udie, Udie. What are we going to do with you?”

Lura turned a tear-stained face up to her mother. “What do you mean?”

Just then, they heard the sound of a car pulling up in front of the house.

“Goodness, company at this hour. Wipe your eyes, Udie.”

Lura did just that as her mother went to the door.

Mrs. Allison opened the door and exclaimed, “Mrs. Fagan, so nice to see you. I have a feeling I know why you’re here.”

She ushered Lura’s new mother-in-law through the door and into the sitting room. Lura knotted her hands in her lap and stared at the floor.

“You’ve heard what these two went and did, then, I suppose,” Mrs. Fagan said.

“And that Joe upset her this morning.”

“I’ve come to see if between the two of us we can talk her into giving him one more chance.”

Quickly, Mrs. Allison explained the problem caused by her husband’s solicitous breakfast-making habit. Mrs. Fagan nodded as she listened, then turned to Lura.

“Joe asked me to tell her that he promises to make breakfast for her every day for the rest of her life.”

Lura jumped to her feet. “He did?”

Mrs. Fagan winked at Mrs. Allison and they shared a smile. She said to Lura, “Yes, child, he did.”

Lura/Udie returned with Mrs. Fagan and she gave her new husband his one more chance.

Years flew by. Years together, years apart, separated by war. Nights where Lura slept in a twin bed beside the matching twin of her roommate Dolly while their husbands served in Burma or God-knew-where, even a night where Lura woke to find the apartment building ablaze and made it out alive wearing only a neighboring friend’s maternity top and clutching the friend’s squalling baby. Years where Joe made breakfast, every morning they spent together. Years and years and more years. Seventy-nine years in fact. And would you believe? That cheap old curmudgeon Joe never paid his brother back.

You see, these two — my grandparents — celebrated their 79th anniversary this month. Lura Allison Fagan remained the wife of Joe Fagan for 79 years, three kids, 11 grandchildren, 22 great-grandchildren, life as a designer, an upholsterer, countless hours as an artist, writer, and musician, as a mom, and most of all, as a helpmate. A wife to end all wives, devoted, loving, loyal, patient, and kind. A wife to marvel over, a good woman, the kind the bible celebrates. Don’t believe me? Read about her in Proverbs 31:10-31, all except that part about being up before dawn to make breakfast, of course. 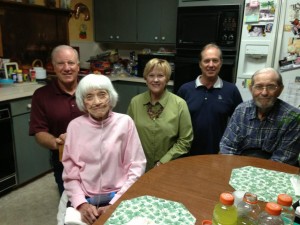 Two days after their anniversary, Lura went to sleep. Her frail body, at nearly 96 years of age, just couldn’t do it anymore. In the last few years, she’d suffered a broken hip, a fractured back, and a devastating lung disease. Everyone knew, somehow, that this sleep was her last.

Joe kept vigil at her side, as did her three adult children.

But if Lura heard him, she gave no sign. She took one last breath and set off on her final journey. Because of course, as was her way, she had to be the first to go.

Rest in peace, sweet Mur. I love you.

With apologies to my family, as I’m sure I butchered the real version in my re-imagining, but with great love and affection.