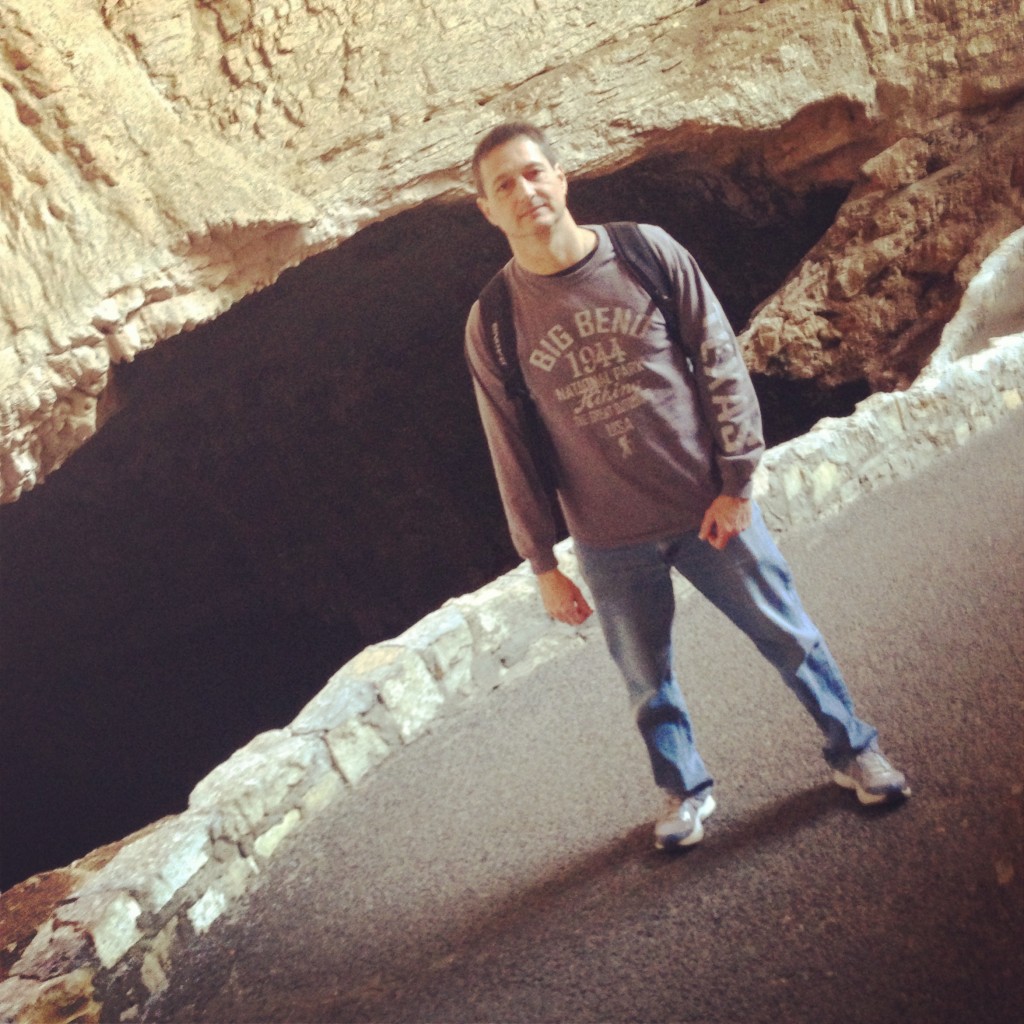 Warning! This post gets all twilight zone on ya, so don’t think I’ve lost my marbles. 😀 Keep an open mind, and see if any of these feelings relate to experiences you’ve had in your life.

Eric holds special memories of Carlsbad Caverns from his college days at the University of New Mexico. Way back then (30+ years ago), he spent two days there after an emotionally difficult time, soul-searching, often off-path — at least when no park rangers were around to see him — in the pitch darkness. He remembers vividly feeling the presence of something else beside him, following him, and strangely comforting him. He never saw a ghost or anything like that, he just didn’t feel alone. He emerged knowing that however difficult his life became, that he had value and would be all right in the end. Life did get hard, he did persevere, he rediscovered his value, and his life is great now.

And now he wanted to go back. Rather, he wanted to take me. He wanted me to experience the caverns and to share the scene of what he considers to be the pivotal transformation in his life. We finally made it there in March of 2013. Our timing was tight, with just one day for spelunking, so we got up early and were among the first people to descend for the day through the natural entrance.

We hiked down the steep, switch-backed path in reverence. I’ve gone caving before, and I’ve seen some big ones, but this cavern was like nothing I’d ever seen . Dizzifying drops taunted us toward nowhere. Stalagmites and stalactites jutted up and down like monster’s teeth. Giant formations spilled before us, like alien brains. We gazed into pools of the clearest water you’ve ever imagined. It was one jaw-drop after another.

It’s hard to describe how I felt. Reverent, yes, like a worshiper in a majestic cathedral, but also joyous. Joy spilled out of me like from a wand of bubbles blown by a friendly breeze. I was with my husband, of course, and that tends to make me happy. It was more than that, though. It was more.

About halfway down the 1.25 mile-path, we reached a straightaway. As we walked along it, I practically skipped along behind Eric. Here we were, all by ourselves in this special place with the day stretched out before us like a promise. An awareness arose in me. We weren’t alone. I sensed someone behind me. I turned reflexively.

He was a young man, Caucasian, dark-haired, dressed in jeans and a t-shirt. I flashed him a smile and turned back around. And I immediately whirled again. Something about him looked wrong. Not scary wrong, but different. He didn’t look, well, present. He lacked the color and substance and dimensions I would have expected.

But on my second look, he wasn’t there.

A happy sound something like a laugh burst from me. “Eric, I just saw a ghost.”

I ignored his skepticism. “I’ve never seen one before. I’ve thought I’ve felt them, but never actually seen them. Awesome.”

Eric descended a few more more steps into the twilight. Then he stopped. He turned and looked behind us. I stepped around him then stopped and tied my shoe.

“No, really, I did. He was walking away from us, but across THAT,” he said, and pointed into the thin air above and behind us off-trail. “Across nothing.”

“So now you believe me?” I asked, just to be sure he wasn’t about to tease me by retracting a faux confession.

“Yeah, I do. I wonder who he was? Maybe an explorer who died here?”

“But he looked more contemporary to me.” To test him I asked, “What did he look like to you?”

“Just a normal guy, maybe in his twenties, in jeans and tennis shoes.”

There was no sign of our friend now. We resumed our hike, and we kept a sharp eye out for him, but we didn’t catch another glimpse. Still, he dominated our thoughts.

It wasn’t the first time we’d shared experiences others might doubt. That was practically normal for us. It wasn’t even the first time Eric had seen a ghost. It was just the first time we’d seen one together, and to see it at a place holding such significance for Eric, along with his certainty that he had not been alone during his previous visit, was beyond intriguing. It was a mesmerizing mystery.

That night we both dreamed of him. The next morning we talked out our theories of who he was, why we had seen him, and what it had all meant. First, though, we Googled ghost sightings in the caverns. The only results we got sounded nothing like ours.

“Maybe it’s the same spirit that was with me before,” Eric suggested.

Chills ran up my spine. Yes. That sounded right. “Maybe it is.” A theory formed itself into words in my mouth. “Maybe what you felt before was bigger than one person. I wonder if our life patterns repeat themselves, and we relive a destiny that generation after generation before us has lived too. It could be like in Cloud Atlas, you know?” We’d both loved the movie (tsk tsk neither of us has read the book).

He nodded slowly and reached for a strand of my hair to twist around his finger. “Like souls continuing.”

“Right. And the spirit for your particular destiny found you and comforted you. Not one person per se, but all the energy that made up your soul’s history. Like you visiting you. An older, ageless version encouraging that tortured young guy licking his wounds in the dark. And now that the young guy has grown up and come back, it’s like the spirit is here again to celebrate with you.”

“Or it could just be some old guy that died there exploring the cave.”

He hugged me tight and whispered in my ear, “I like our version better though.”

“I do too. And I like that I saw him first. To me, it’s like he was happy that you have someone that values you, and someone that really gets you, that sees you. Like I saw him.”

Our words trailed off and we lay together in the shaft of morning sunlight beaming through the window of our room at the Trinity Hotel. I reached my hand behind my back to hold his, and he weaved his fingers through mine. I tingled with the joy of it all, of life with him, and the endless possibilities before and after us. Really, I had no idea who our friend was or what he represented, but I knew that I believed.

And sometimes believing is one billion times better than knowing.

Have you ever had times you believed that a ghost or spirit was present in your life?