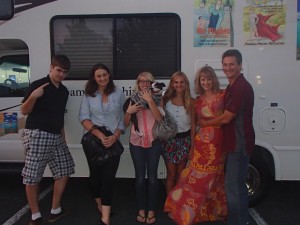 As I sit typing this in Big Spring, TX, I’m on Day 5 of Petey’s Big Adventure, aka the #SixtyCitiesinSixtyDays Nationwide RV Book Tour. Petey’s chomping an angry bird toy with a silent squeaker — hello! perfect for a one-eyed Boston terrier in a 24-foot RV — and Liz is sleeping in. We have 700 successful RV miles under our belt, and we’ve knocked out two TV shows (here’s the link to Mom’s Everyday in Waco), four radio interviews, and a print interview. We’ve held four events in four cities. We’ve conquered after-dark RV hookups like a boss. We’ve endured Petey’s early rising, and I’ve kept up my schedule of short Petey jogs each morning. 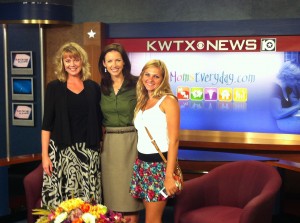 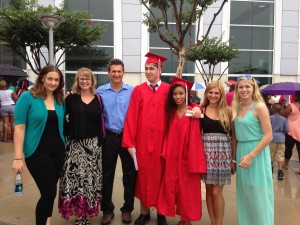 On day one, we left only after attending the miraculous high school graduation of our ADHD WonderKid, Clark Kent himself. And this after his school counselor called to tell us three days before that he probably would not graduate. His English teacher took his late paper, gave it a 97, and wrote that it showed “creative insight” and “deep thinking.” THAT BOY!

Our 1st night in the RV we arrived to discover Petey’s leash had gone missing, and that Pamela cannot operate a simple flashlight. Oh, and that deer in the pitch dark by the light of a phone look shockingly like rabid alien wolves. Or something. 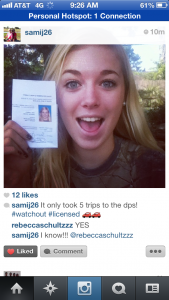 On day two back in Houston, Susanne got her drivers license. One hour later she backed out of our driveway into a moving UPS truck. 🙂 I guess she meant it when she said, “#watchout.” 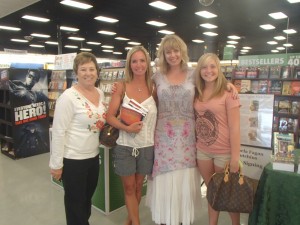 Our 2nd night in the RV Google Maps failed us and we only found the park thanks to a friendly resident of La Grange who obviously gives the same directions 36 times a day.

On our 4th night in the RV, we stayed in a great RV park in Big Spring which, in the current oil & gas boom in West Texas, has turned into a giant Man Camp, the roughneck capital of Texas, for sure. We were careful not to leave a red light on, and even at that we’ve never had so many offers of assistance in our lives.

It’s amazing how many times I can forget which side of the RV to line up for gas and hookups. I’ve racked up 100 of our 700 miles  circling gas pumps. 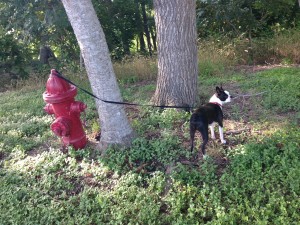 Despite a beautiful kennel that takes up 100% of the leg space under our table, Petey only allows us to sleep if he’s in bed with me. This is not good. Instead of Petey’s Great Adventure, we should call this Petey’s Great Spoiling. Liz keeps calling him a piggy and telling him he’s fat, but that hasn’t stopped her from slipping him potato chips 😉 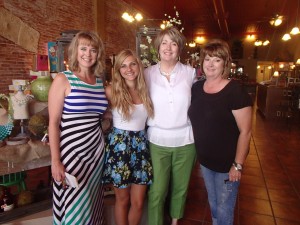 Hastings Entertainment has the nicest employees ever, and they give authors and their staff free drinks from the Hardback Coffee Bars. I’d do this tour just for the sugar free non fat iced caramel macchiatos!

Liz is such a great travel companion and hard worker that I don’t want to give her up in a week, but she has to get on the road to California as she has transferred to a Los Angeles-area school and will continue to swim there. I love getting the time to talk to her and just be with her. She’s a wonderful, wonderful young woman. 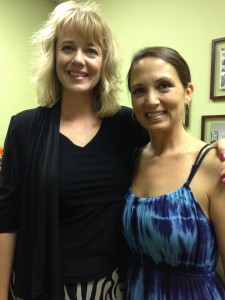 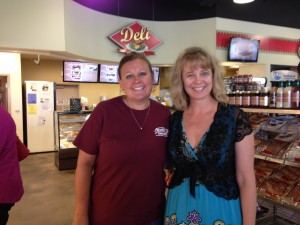 I’ve connected with friends I haven’t seen in 20-25 years already! I’ve made new ones too. 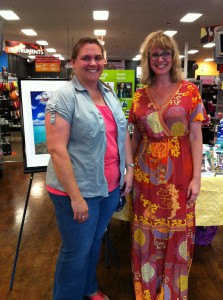 We’re giving out advance review copies of Leaving Annalise in June WHILE THEY LAST to the nice folks who come out to meet us and whisper CODE WORD PETEY. This was Eric’s brain child, and people love it. So, come see me and give it a try. They’re going fast, though.

I can’t believe we’re really doing this. Eric worked so hard to anticipate every problem I could possibly have, and things are going great as a result. I have the world’s sweetest husband, for sure.

A week before we left, my father sent me the nicest email:

Looks like you have taken to heart what I always told you as a kid — girls can do anything they dream to do, if they are willing to work for it.

I believed him then, and I believe him now. 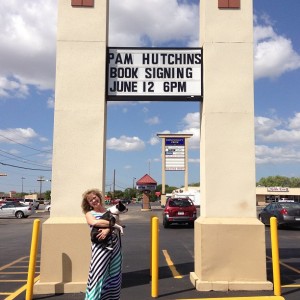 Another person sent me a note about my “courage,” which I think is code for “what the hell are you thinking???”

I’ll see you all soon, I hope!