On Chicago, which used to be one of my favorite places.

Chicago, I don’t know where to begin. Our “100% nonsmoking” smoked-up hotel room? The surrounding grounds which smelled like urine and were littered with liquor bottles and . . . other stuff? The two different people who cut inside me to pass me on left hand turns, one of whom missed me by inches? The Starbucks with horrible wifi (a big issue when you’re on the road, and just forked over the $$ for the overpriced coffee you only bought so you wouldn’t feel guilty about scarfing down bandwidth)? The 70-mph winds, driving rain, and tornado watch that essentially shut down the oh-so-delightful Barbara’s Bookstore, and which commenced so rapidly that Petey nearly blew away with only Marie’s grip on his leash to tether him down, like a Macy’s parade balloon animal?

Yes, it was blowing THIS HARD (actual photo from last night in Chicago). 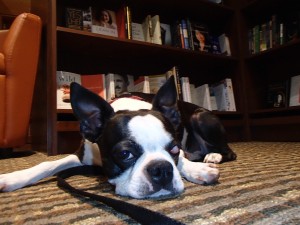 Petey recovering from his Toto impression.

No, I know what it was. It was getting pulled over at 10:30, when we still had a one hour and 45 minute drive to go to get to our RV park for the night. Ostensibly, the rude, cocky officer detained us because I failed to signal for my right hand turn, although I had signaled my lane change and was in a dedicated turn “ramp” lane when I made the turn.

“Why’d you take so long to pull over?”

“I pulled over as soon as I saw you and it was safe to do so.” On a busy interstate at night, I might have added, but didn’t, because I hoped this would be fast, and sarcastic doesn’t usually help things move along swiftly with an officer of the law.

By now there were three cops from two cars behind us.

“Don’t you use your rearview mirror?”

“I can’t see anything in the rearview,” I started to explain.

“So your side mirrors don’t work?”

“Yes, but I’m following directions in a city I’m not familiar with, so at the time, I was looking forward and not sideways. I stopped as soon as your lights caught my side mirror and blinded me. Which is only a quarter-mile from where I made the turn, including a long interstate on-ramp.”

“No, but I’ve never been here before.”

“How long have you been driving?”

“Where are you coming from?”

“So you work for McGraw-Hill [whose offices were across the street from Barbara’s]?

Long explanation followed, barely audible through the traffic noises from the busy interstate three inches outside my window. Meanwhile cops with flashlights poured over the outside of my vehicle. Which is not unusual for people to do, as it is a little, well, eye-catching. I saw phones out. That’s not unusual either. Let the googling commence.

“Where were you parked for this — what did you call it?”

“Signing. Behind the store.”

At this point, I became irritated but decided to deliver my barb wrapped in charm. It was dark enough to conceal my crow’s feet, and I still had good hair and makeup, after all. “This big ole obnoxious thang? You couldn’t have missed it. It was there for four hours. Have you taken a good look at this vehicle, officer? We can’t even get gas without drawing a crowd of looky-loos snapping pictures.”

Charming didn’t work and neither did the barb. The questions kept coming, rapid-fire. “Is it yours?”

“Do you know how to drive it?”

“Why are you in Chicago?”

At which point I re-explained the book tour concept.

“Where did you stay last night?”

I named the nasty hotel.

“Oh my God. Why didn’t you just stay in your RV? That place is a dump.”

“Yes, but they take pets. And if I just park my RV any old place, I’ll be rousted by a cop.”

“Yeah, ESPECIALLY WITH THOSE TEXAS PLATES.”

And now we got to the heart of the matter. I was guilty of driving with Texas plates. In Illinois. I suspect this issue will only get worse as I go further east. OH JOY. Officer Friendly walked back to run my plates, and took his sweet time doing it. I’ve included a fairly snarky rendition of a cop in next year’s Going for Kona, and I’ve had second thoughts a time or two, but I wasn’t having any then.

When he returned, he handed me this: 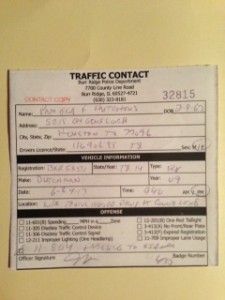 “Use that blinker. You’re not in Texas,” he said. “This is just a warning.”

Whereupon he proceeded to chat loquaciously about our journey and ask five million more questions, all of which we answered with good cheer and nary a trace of our angst over the near-half hour stop and the weight of our eyelids. Yep, he wasn’t so bad after all. If I hadn’t been so tired, I would have given him a book.

And within moments, I was able to recall how delightful the Barbara’s Bookstore staff really was, especially in those moments when we were all  scared together. The treat they gave poor Petey when Marie got him inside. Their pet-friendly, adorable store and how Petey followed everyone around like he worked there. The lovely setup they had for me, and their mutual disappointment that weather kept everyone away.

Except that it didn’t. 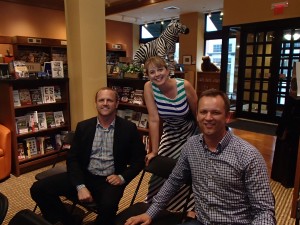 Neither rain, nor snow, nor sleet, nor hail (nor near-tornadoes) shall keep Joel and Michael from Barbara’s Bookstore.

So I gave my presentation, and used some of the more colorful language I save for the really awesome people, and we sold some books and weathered the storm together.

Here we are safe, sound, and happy (with decent wifi) the next morning, in state number 10, Indiana. Living the posh life, baby,with a lakeside campsite. Note: Marie was just barely able to conceal the interstate/major 18-wheeler route whizzing by on the other side of the lake. As in immediately adjacent to. If you are ever wondering where truckers spend the night, it’s at truck stops in Remington, IN. When we were lost at 11:30 p.m. — because it’s just not a party until Google maps takes you down a single lane dirt road to the end of a municipal airport runway with no street lights (try turning a 24-foot Class C Motorhome around there) — we saw hundreds of them tucked in for sleepy-time at several mega truck stops.

Well, we survived the man camp in Big Spring, and we survived Trucker City too. And isn’t it a gorgeous day? Indianapolis, here we come. 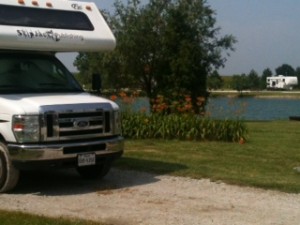 And that, my friends, is all I got.