Indiana owes me a microwave.

Y’all, our place in Nowheresville is down several miles of not-so-great road. I lived in the rainforest of St. Croix where we named the Volkswagen-sized potholes the government never fixed. I’ve even survived as a passenger in my daughter’s truck with her, and she hits every curb (and many vehicles: 3 in 3 weeks at last count). I thought I knew bad roads/rides.

Then Marie and I drove through Indiana.

Holy cow! We shook until our jaws ached driving I-70 below the speed limit. And we were in the Bookmobile. So everything in it rattled and threatened to come off the moorings. Finally we heard a Smash! It was like a shotgun had gone off inside the compact space. We were driving bad roads at night in the rain, and we’d been well-trained by my sweet Eric that one must NEVER swerve or startle while driving the Bookmobile, so I gritted my teeth, took my foot off the gas, and kept my eyes trained to the road.

“What the HELL was that?” I asked.

The microwave had ejected its glass plate and the assembly upon which the plate turned. She explained the interior was now covered in broken glass.

“I don’t know how to fix that,” I said, referring to the plate and assembly. I knew how to clean up glass (or so I thought, I got two pieces stuck in my bare feet — note to self: wear shoes next time).

I think the state of Indiana owes me a new microwave.

Other than that, Indiana was amazing, or at least amazingly windy. Seriously, y’all, it was like Amarillo-to-the-power-of-Chicago windy. But amazing in other ways too. Waving green rows of corn, vast fields of wind generation equipment, dilapidated barns and silos still productively doing what barns and silos do, even without a coat of paint, super-nice people, and parking lots spilling over with 100s of truck stop 18-wheelers catching a snooze at the crossroads of America.

We didn’t know a soul in Indy, so I was fearful that our stop there would be a dud, but I shouldn’t have worried. The Carmel Barnes and Noble staff embraced us as foundlings — I think we would have had a few yeses if we’d invited them on the road with us — and the locals did their thing and bought my books. The Community Relations Manager actually ran out and flagged us down as we were pulling away to sign two books he had bought. I just love it when that happens. 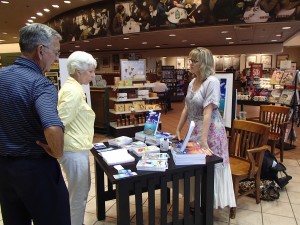 The only other rocky Indiana moment occurred when a cop whipped around and tailed us for two miles. But methinks he was reading the book cover decals and Googling, because I had some hits on my website that corresponded amazingly well to his location and that time frame. He finally peeled away to terrorize another motorist.

Which brought us to Ohio. And better roads, immediately. I should mention at this point that we average getting lost once a day. This day was no exception. Usually it’s an iPhone issue, so we’ve learned to rely on our printed Google Maps as a double-check and back-up. We made it into Columbus early and thought we’d skated in under the radar at the B&N’s Starbucks, but Marie was busted as “one’a we” (as we say in the islands) by her Texas driver’s license. Meanwhile I was out walking Petey and one of his admirers was very excited to learn who we were, as she is a huge reader and had seen information about the tour, the books, Petey, the kids, and me on Facebook. 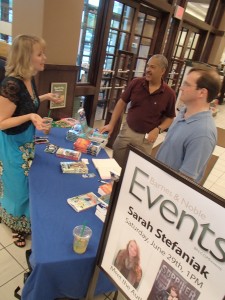 Guy, of the islands, Peter, of UT Law School

After a rocky start in which I spilled an entire Venti Orange Valencia Refresher — a crime, b/c they’re seriously awesome — and ended up in the elf stance in my medium-high heels with a handful of napkins sopping up the mess — we did great in Columbus. Some old friends showed up, from island and law school days. And we sold a bunch of books to strangers. I love chatting with new people about the books. It never gets old to make someone happy. But the weather closed in on us.

I swear, the Bookmobile is nothing if it isn’t a rolling mobile home, which anyone knows is just another word for tornado magnet. We’ve had high winds and rain every day since Des Moines. [I count my days by event city names — Des Moines, Minneapolis, Milwaukee, Chicago, Indianapolis, Columbus, etc., and I’m typing this on day Pittsburgh. Got it?] Hail in Indiana. 70 mph winds in Chicago. And a tornado watch on several of those nights, including Columbus. So we packed up and moved on. With the microwave door flapping since — oh yeah — the latch doesn’t act very latch-like after Indiana. And got lost again. But found our way back and made it safely to our RV park, where I scared the bejeebers out of our neighbors backing the Bookmobile past their tin can car into our spot. Hey, my daughter may have had three collisions in three weeks, but I haven’t had a single wreck in the Bookmobile this entire time.

And now as I type this we’ve just passed through gorgeous Wheeling, West Virginia and are wheeling on into Pennsylvania and Pittsburgh.

Life is good on the road, methinks.

p.s. Thank you Larry the forklift driver from Overland Park, KS who found and returned Eric’s checkbook and notebook.

p.p.s. There are muddy paw prints (b/c Petey likes the game of “bury the bone, unbury the bone” when mud is fresh) (oh God, that sounded awful, didn’t it?), Beanito crumbs, and dog hair all over the bed sheets I’m sitting on. Lest you think the road is clean or luxurious. Time for an RV park laundromat!!

p.p.p.s. It was really hard not to wear my red/orange dress for two whole days in a row.