Wouldn’t you know it, Eric missed the best store on the entire #SixtyCitiesinSixtyDays Nationwide RV #BookTour?? Yes, it was #22 in the super adorable town of Clinton, NJ (don’t believe me? go there, enjoy the downtown, visit the waterfall) at the Clinton Bookshop. The shop, owned and run by bookophiles Harvey and Rob, is actually in the historic original town library. And it’s pet-frickin-friendly. Petey had a blast. He even graced the shop’s Facebook page and played crazily with Rob and the other customers, until he passed out underfoot in the checkout line. 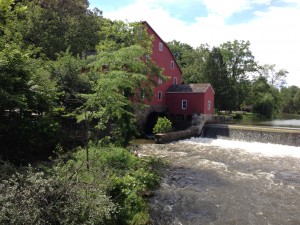 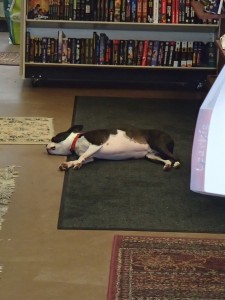 Our St. Croix friend — now a Philly ER doctor — braved rush hour traffic to come too. Some people are so damn nice. Yes, this was a store Eric would have loved. And if he’d been there maybe I would have spent less money on audio books. I canNOT resist good used audiobooks. It’s a sickness. I justify it as “work,” since I am supposed to read other authors on a daily basis, as a writer. Reading via multi-tasking while driving or cleaning or exercising is just smart, it’s a time saver, it’s efficient, it’s a money-saver. At least that’s what I keep telling myself. 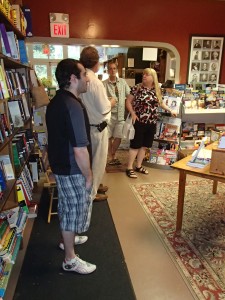 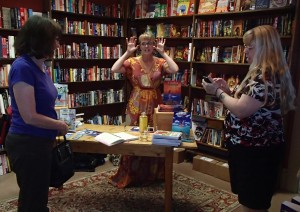 Me, trying to scare the customers away.

I could barely contain myself by the time we got to Philly. Neither could Marie. While I was expecting a conjugal visit from my super cute husband, she got to go home and sleep in a real bed. It’s a testament to my enthusiasm for my husband that I preferred my option to hers. So off she went to Houston, and I set up in the Devon, PA Barnes and Noble.

Eric was to arrive at six, via taxi. All was good at the book store; my expectant grin drew in some fun book buyers. Until Eric’s arrival time started to slip. First, his plane was delayed an hour. The gate agent told him it was due to weather in Philly. I sent him a text of the sky over Philadelphia for him to show to her. Suffice it to say she lacked a sense of humor. 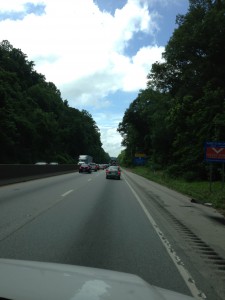 Nary a cloud. Or at least none bearing weather.

Things got worse when he landed at the Philadelphia airport. It turned out that his young Italian-American cabbie, a native of Philadelphia, prided himself on being the only cab driver in the universe to eschew a certain modern invention called a Global Positioning System, or GPS. He was so confident, in fact, that he refused to even glance at the Google Map Eric had printed of the route to the store, and offered to him. Repeatedly. As in every time the cabbie had to make a u-turn because he was so damn lost.

“Did you tell him this was a conjugal visit?” I asked via text, frantically.

“Can I send you directions?”

“I have them. And the store has given them to him via phone three times now.”

ARGH! Finally, my beloved entered the store at 7:55, five minutes before the end of my event. But that was enough, for me and all the other women currently there. My book sales shot up, and we stayed over. Yes, that’s the secret of my success: man candy magnet. 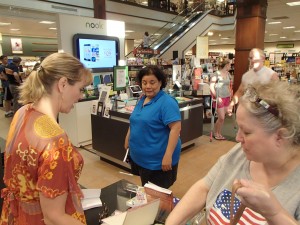 Post Eric, the women started flocking to see me.

The rest of the night went splendidly, IMHO. Petey was initially excited to see “Dad,” but not so much when Dad explained that there was no room for a Boston Terrier in our little RV bed, even a rock star one-eyed spoiled Boston Terrier. Pout pout pout. Guess who wiggled his way in on my side anyway about 3 am? Shhh, don’t tell Eric. 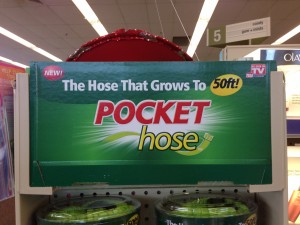 Actual sign in Philly Walgreen’s. Was I just missing my husband, or is this a little suggestive???

Onward we trekked in newly-reunited bliss to Baltimore for July 4th. We got the best parking space on the harbor, right behind the Barnes and Noble Power Plant store in the B&N reserved spaces. Well, actually in the B&N reserved spaces and completely blocking their trash bins. Which smelled a lot like, well, trash bins. Blech. Our generator wouldn’t work because of the seemingly impossible angle at which we rested on the humps of asphalt, so we had to open all the windows to vent Petey. Luckily, while the odor was foul, the temperature was fine, and it quit raining for a few steamy hours. 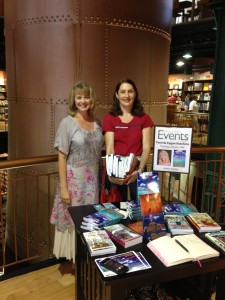 Name that Cruzan. Bonus points if you name her (not pictured) husband too.

And guess what? More Cruzan friends showed up. Here I am with the beautiful Anna, who also brought her Mom. This store was incredible, and great for Independence Day people watching. There was even a sort-of Cruzan working the register — his dad was a bahn yah native, so he and Eric had a grand old chat.

We had to leave before the fireworks, but not before we made a cool new friend (props to Ajay for a great chat), cheered on a young writer, enjoyed the visit of a Twitter friend whose kids got to visit Petey, and provided a respite for some of the mentally challenged folks who just needed an excuse to stay out of the heat, and found it in congregating for bipolar chats around and over me. This was the second time on the tour I’ve been cornered like this. It’s pretty intense. And totally fine. I’m kinda intense myself some times. 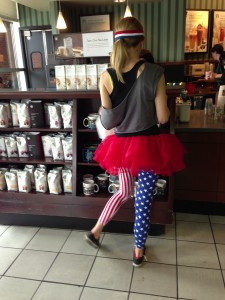 It was July 4th at the Starbuck’s Cafe too. Note: that is not a picture of me from behind. I look much younger and toner than this 19-year old girl, for sure.

That’s all I got for now.