Traveling with my husband is never boring.

After Baltimore (#24), we lumbered on through Maryland and West Virginia, catching fireworks on the way and listening to one of my new audiobooks. It was, by the way, totally gorgeous. We made it to our camp ground with nary a wrong turn and awoke the next morning to more rain, in southwestern Pennsylvania.

Fifteen minutes later we were motoring along at 70 mph in West Virginia, holding hands, listening to Defending Jacob, and generally being in love with each other and the hills when Eric dropped my hand and yelled, “Oh shit!”

This really isn’t all that unusual so I barely flinched.

As he slammed on the brakes and pulled to the shoulder, I said, “What’s wrong?”

“Stuff is flying out of our cargo hold and onto the interstate!”

“Oh no! It came open?” In hindsight that question was not helpful.

Eric didn’t bother answering. He was out the door and running back the way we had come.

“Be careful!” I shouted, in a loving waste of breath.

I flipped on the hazards and oh-so-carefully backed the RV a quarter mile up the shoulder. Eric returned with an unscathed sandwich board.

“No one even ran over it,” he said, grinning.

“And nothing else fell out.”

I would have given him a rash about forgetting to latch and lock the cargo hold except I was the dumbass who had done the same thing in the first week of the tour. 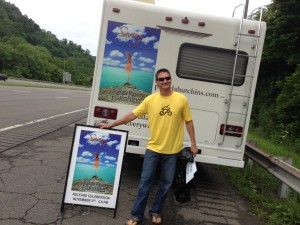 OK, maybe there were a *few* scratches, but can you believe this thing tumbled on an interstate at 70 mph?

We jumped back in the Bookmobile and resumed our journey to #25, Cincinnati. While traffic was light in the store — as it always is on Friday nights — we still had a respectable showing and we adored the store staff, who proclaimed themselves fans. It bears mentioning that the weather sucked, as it has every day for the last 3 weeks. 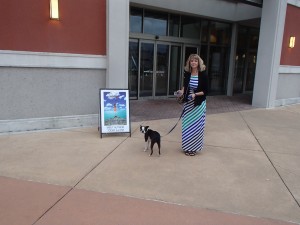 Outside the store, because we forgot to take pictures inside.

Onward to Kentucky, where we parked in a monsoon. Eric stepped out of the Bookmobile into two inches of water. Unfortunately, we were in dire need of dumping our tanks, so dump he did. He came back in bleeding.

A familiar answer from my sweet. He washed and bandaged himself, and then we slept sweetly and deeply in the endless rain, waking refreshed, if soggy. We raced through the rain to the laundry room. We sampled the facilities, to discover THE BEST shower rooms in 26 cities! Thank you Whispering Hills RV Park in Georgetown, Kentucky. We dashed back with our dry laundry and got ready to go.

“Have you seen the keys?” Eric asked.

“Not since you used them to open the dump hatch last night.”

Water dripped from the end of his nose and the set of keys dangling from his right hand.

“Where’d you find them?”

I tightened my jaw to control the smile which threatened to sneak out. “Honey, I swear, you have a jumbie. A jumbie who unlatches the cargo hold. Who slices open your hand as it rips away your keys and tosses them to the ground. He’s probably the one who keeps hiding your glasses and phone, too.”

He nodded, his face blank but his eyes twinkling. “He’s jealous of all the attention I get in your books.”

“Annaly never had a jumbie. It was yours all along.”

“I’d better sprinkle some chicken blood around the Bookmobile or he’ll keep following us on to Tennessee.”

“Or I could just dedicate my next book to him instead of you. Maybe a little acknowledgement, a little validation is all he needs.”

So on we trekked through beautiful (wet) horse farms and flint hills to Lexington for an amazing showing at the B&N, including an appearance by one of our — yep, you guessed it — Cruzan friends, the dear Anita and our newly adored Charlie. I inhaled two Refreshers and one Latte. We took a night off to dine on Chik-Fil-A and catch a so-so movie, Lone Ranger, both of which were perfect because we were together and the pressure of endless work was off, temporarily. 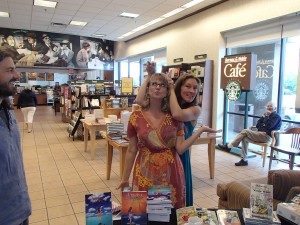 Nothing says I’ve loved and missed you like a rabbit ears shot.

We arrived in Horse Cave, Kentucky and collapsed in a happy heap until all of three a.m., when Eric’s jumbie, not to be ignored, whipped a nearby rooster, two chickens, a donkey and a turkey into a frenzy. 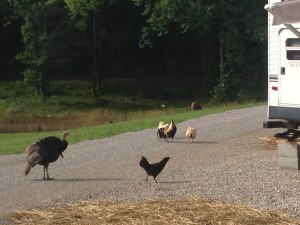 I think I’d better hurry and get this book out with its jumbie dedication so it quits tormenting poor Eric.