On the way out the door to my speaking engagement on my final morning in Chattanooga, I blew out my orthotic flip flops. I’ve worn them incessantly for three years. Foolishly, I didn’t order a back-up pair for the summer. I’d taken their hardiness for granted. Never fear, my sister-in-law told me. Chattanooga Shoe Company carries orthotic/comfy shoes.

That is how I came to own four new pairs of shoes, all by Ortho-Heel, one identical to the pair I broke. I think it was pretty smart of me to buy the other three in case they break again in a city that doesn’t have a store carrying them, don’t you? 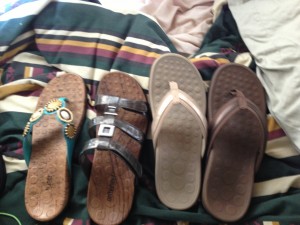 Post “Colonel Mustard in the Conference Room with his Pants Down” speech for the Kiwanis Club (a hit, as always, because who doesn’t want to hear the story about the Bexar County Court designating me as an expert on the issue of oral sex — a story for another time), we put Chattanooga in the rearview mirror, and GiGi, Annie, and I set off for Atlanta. Traffic immediately backed up: a horrible wreck with fatalities. My brother Butch called to re-route us. Note: Butch is the Commanding Officer in all interactions. Being a Colonel in the Marines is a 24/7 job. 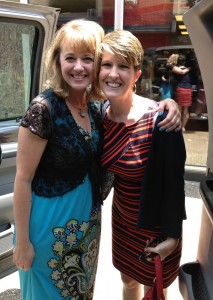 Saying goodbye to Chattanooga and my beautiful sister-in-law. 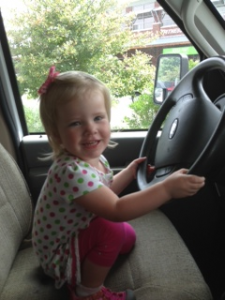 We should have just let her continue to drive the Bookmobile 🙂

We had an issue on re-route, and it wasn’t just that Annie had started to scream five minutes after we buckled her into her car seat and hadn’t taken a breath since: a tunnel. A tunnel with 12 foot six inches overhead clearance. I had operated under the assumption that I shouldn’t enter anything lower than 13 feet. I called Eric for guidance.

“I need an answer in one minute. Can I drive through a 12’6” tunnel?” I said, sans civilities.

The roundabout which would carry us into the tunnel loomed in front of us.

“Are you sure? Even with the air conditioner sticking up?”

But it was already too late for an answer. Mom and I glanced at each other and drew in deep breaths as I pointed the Bookmobile at the tunnel entrance. Annie kept hollering. I tensed, waiting for a top impact.

There was none. PHEW! We sailed through the tunnel, which threw us out the other side a mile past the accident, and saved an hour in the process.

Two ear-splitting hours later, we stopped at Walgreens and bought Annie everything her little heart desired in the name of peace and quiet — don’t get me wrong, she is the cutest thing ever (and my best friend), BUT she is two. Still, when we arrived at Land of 1000 Hills in Roswell and Butch joined us, he decided that a hoarse and napless Annie was not a match for a coffee house book event. He turned his truck around and went straight back to Chattanooga. Actually, that’s not true. First he put Annie in time out facing his truck in the parking lot, a fact she informed her mother of immediately upon getting home later that night. 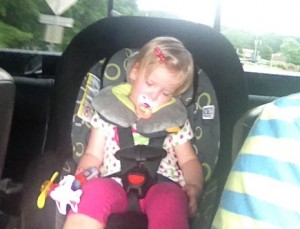 We missed them, but not for long, because the event soon burst at the seams. We had suspected Atlanta and Los Angeles would be our best cities after Amarillo and Houston. We’ll see about LA/Irvine, but we already know we were dead on about Atlanta. Two of the talented voice over artists who narrated my books came, toting friends, flowers, and more friends. Cruzan friends came. High school friends. Stranger friends. People in the coffee shop wandered over. The owner joined us. And we talked BOOKS and WRITING, and it was the most fun I’ve had at a book event, ever, except for maybe the launch party for Saving Grace. And we sold a lot of books, which is always nice too. The coffee shop is a free trade partner with some Rwandan coffee growers, and we loved that our event contributed to their social enterprise as well. 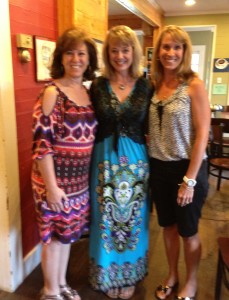 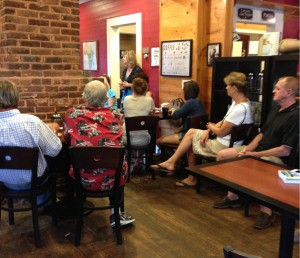 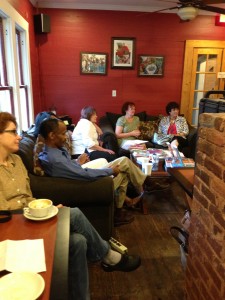 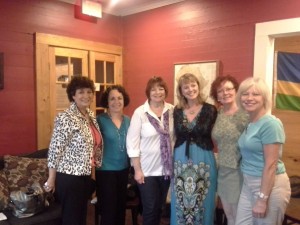 While I had a blast, I had slowly made my way toward meltdown for the last few days. I was having trouble sleeping and that night was no exception. Four days of four hours per night was adding up to jittery brain fog and epic dark circles. I didn’t sleep any better that night either.

The next morning, Mom let me sleep while we drove to Charlotte, or try to, rather. About the time I nodded off, the Bookmobile inexplicably pulled to a stop. Loud traffic still wooshed by outside. I propped myself up on an elbow. I spied police lights out the back window. I rubbed my eyes and hopped down from the overhead bed, grabbing the insurance folder for my mother as I did.

A South Carolina cop stood outside the passenger window. He asked my mother to step outside, and he took her to stand beside not one but two cop cars. A few minutes later he knocked on the door and I came to it. HE WANTED TO TALK ABOUT MY BOOKS. Seriously, that’s all he wanted!

Meanwhile, they made my mother continue to stand with them, hassling her like a drug-running granny. They noted we had already been pulled over in Chicago, only because I had sleepily handed over the whole insurance folder, which held a copy of the Illinois warning. Mom refrained from telling them about the bogus reasons, or how irritated she was. I admire her restraint.

When they released her, she was steamy, hissing mad. “They said my left front wheel was on the lane line when I passed a semi.”

Another bullshit cop stop. “Did they give you a ticket?”

“No, not even a warning. Why don’t they pull over that guy?” She pointed to a red truck with SC plates that was weaving in and out of its lane beside us. He looked either drunk or crazy. He sped up and slowed down in 20 mph increments. But no police officer pulled him over, or any of the many semis who were lurching all over the road in the wind. We were the only ones with Texas plates and giant book cover decals though.

Argh. The stop cost us half an hour. We continued on to Charlotte, but behind another major traffic accident. Another half hour slipped away. But we made it on time, thanks to building in an extra hour into our day’s plan, and safely, so I shall quit kvetching.

Our Charlotte event was planned for a small group, and it was to be our lowest of low key days out of 60. AND IT WAS DAY 30!! As in “Pamela is halfway, baby!”

Two perfectly lovely island friends came and stayed to chat the entire time. We sold some books to strangers too. I hear that another contact showed up five minutes after we pulled away, but we have no idea who it was. Bummer. But it was good, all good. 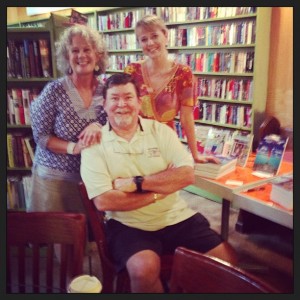 By this time, my adrenaline had depleted and my body remembered it was worn to a hairless, brainless frazzle. I forgot that we needed to go to Fedex. Marie reminded me. We turned around. Forty-five minutes later we had were back to where we’d started our turnaround. I downed my planned mega sleep meds (thanks Eric and Betsy). Mom drove through 5 pm traffic to our next destination. When we arrived, I was, well, loopy. Not asleep, but not awake. Impaired. Witless. 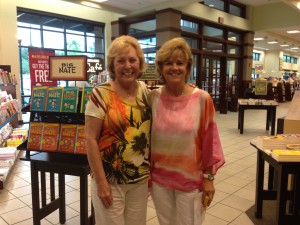 Sneak preview of Raleigh — my sweet little Mama and her sis-in-law’s sis.

I mumbled my mother through a half-assed Bookmobile set up and re-tumbled into bed. I lay in a fugue state listening to thunder and pounding rain. I don’t know how long I drooled there before I realized I was wet. I had somehow left the vent open above my bed. Through it, a waterfall tumbled onto my feet, the comforter and sheets, and my partially closed laptop.

I stumbled awake and saved the laptop first. Then mom brought me towels and we sopped up as much of the pool as we could from the bottom sheet. I crawled back in bed, this time lying on a damp towel and wearing a sweater and socks over my night shirt, with another damp towel as a cover.

“Use my blanket,” my mother offered.

“No, I’m fine,” I insisted, my woozy brain almost believing it. I took more sleep drugs, talked to my husband, fiddled with Facebook, and fell back into a druggy sleep. After a recently-normal four hours of sleep, I woke up. Petey was plastered against me, and had managed to work the towel off of me and over him. It was three a.m. I needed more shuteye. I groped in the dark for benadryl and found it, downed two more, and the next thing I knew it was six am, and I had slept seven hours. A full seven hours! While it wasn’t yet enough, I felt halfway back to human.

It was then I noticed the obnoxious sound of our generator. In my daze last night, I hadn’t noticed it was still running. It roared uselessly on, connected to nothing, since we’d switched over to stationary power the previous evening. I’m sure our campground neighbors loved us. I shook my head and turned it off.

The rain had stopped. I found the coffee I had searched for and sworn wasn’t there the day before. I gratefully accepted my mother’s offer to run all my towels and bedding through the drier. I turned on my laptop. Time for #31, and the long trek downhill back to Houston.