So it was Birmingham or Bust for the Bookmobile early the next morning after our great Auburn event. Care to guess the weather? Yes. Rain. But we made it in by 8 am to a Camping World where we had been assured yesterday that we could be worked in immediately today. The woman in Parts was very helpful and remembered me from the phone, but they didn’t have an air filter that would work, or a flush arm, or a gas cap. Instead they examined our generator and dubbed the issue, “Carburetor.” Which they didn’t have either, but could get from a parts store.

“Could you be done today?” I asked, trying to keep my ugly mood swing at bay.

Some hollering commenced back and forth between her and the Service Manager and a mechanic.

That helped matters immensely. They ran our card. I prayed.

I called Enterprise Car Rental, who picked us up. We got a car, and we made a beeline for Barnes and Noble. I picked up our handbills at FedEx Office nearby. I took Petey the Poo for a walk. I worked for two hours sitting in the car with the A/C running for me and Pete. Then we did our event.

Birmingham was one of the towns on our schedule where  we knew no one.  It was also a Wednesday night in a Baptist town, which meant our shoppers would be limited to the heathens. The store was very, very empty. Just in the nick of time, we had a rush of sales and salvaged a good night of it, but it was a long 1.5 hours standing there until they happened. Thank God for the heathens.

The weather had cleared that afternoon, but as soon as I engaged the little rental car in drive, the skies fell. It was a harrowing drive back to Camping World. The tension wasn’t only from the weather and roads, though. I was worried about what I’d find at Camping World, too, and a little bit excited in case it was something good.

We pulled into the camping area at CW and found our ride. I immediately tried the troubled generator, holding my breath.

I swallowed my frustration, with effort. “OK, onward,” I said to Marie.

Marie drove while I talked to Eric. “I don’t even know if they worked on it,” I said. “There’s no paperwork in here, and the generator is acting exactly like it did before.”

“I’ll call them tomorrow,” he said. “You have airport duty.”

Which I did. The next day, after overnighting in Tupelo, MS in a tiny and very cute RV park, I dropped a beleaguered Marie at the Memphis airport and picked up Clark Kent. Remarkably, the sun shone. Clark was immediately Clark-like, texting Marie that he had left her a scavenger hunt to find the car and keys at the airport in Texas, and asking me by text how the weather was in Las Vegas. It was our first few real smiles in days.

Clark hopped in bearing an air filter and a gas cap. We put the gas cap on immediately. I decided to try the air filter in a grocery store lot. Three times in a row, Siri took me to non-grocery stores in bad parts of town. We lost an hour. Eric started calling, but I couldn’t pick up. My stress rose. We decided to try again in Jonesboro.

On the road, I called my husband back. “What’s up?” I asked.

It was hard to hear him over the road noise of Bookmobile highway driving, but I got the jist. “The mechanic said that when he went out to work on the Bookmobile, you’d already picked it up before 6, so he never even looked at it.”

“That’s what I told them. It took me awhile, but I finally got the Service Manager to believe me, and he got the mechanic to admit there had been what he called a miscommunication.”

“They didn’t even look at it,” I said, wilting.

“And they charged us, and I bought a carburetor.”

“Not the rental car. Not all the time it took us.” Eight hours. That’s what we’d invested in the Camping World non-solution.

“I’ll book you in one of the next towns. I’ll get a commitment.”

“Thank you, honey. And we’ll just keep running the engine while we’re in events to keep Petey’s air conditioner going.” I laid my head back against the headrest and let my eyes close for just a moment.

We hung up, and Clark and I made a quick grocery run, then parked at our next Barnes and Noble. He went in to set up, but I stayed outside to change the air filter on the generator.  By now I was an old pro at this, and I whipped the generator and air filter covers off, pulled off the old filter with one twisting upward movement, and pushed the new one on nearly as quickly. Easy as pie. I replaced the covers, and cranked the starter.

I primed it again, and gave it one last try.

But nothing happened. I sat back on my heels. I had done all I could. The Bookmobile was running fine, and I could keep Petey cool, especially in the kind of weather we’d been having, which, while sunny now, was still very mild. Really, this was not that big a problem.

It was a drag, though. A drag and a drain, and I was starting to feel it in my core. I needed to stay UP, to stay positive, to give people the attention and energy they deserved when they came to talk to me about my books. I took a few deep breaths in, counting five one thousands on the way out. I could do this. Today was #40. I was 2/3 of the way through, and I could do this.

And for the first time, that night in Jonesboro, we got skunked. Other than the books we bought for our own RV park giveaways and for the Barnes and Noble employees, we had no sales.

“I’ve never seen our store this dead,” the manager told me. “I think it’s because this is the first pretty day in weeks. We’ve had really bad rain.”

Tell me about it.

Clark and I trudged outside afterwards. “The employees loved you and your books, Mom,” he said, ever the sweet one.

I patted his back. “It’s never like this,” I told him. “Don’t worry. It had to happen one time out of 40.” Twice in a row, I thought. But no, while Birmingham hadn’t been great, it had been respectable.

We packed up together, Petey dancing happily around us, and I snapped a few pictures of the gorgeous night sky.

Nothing left to do but move along. And so we did. 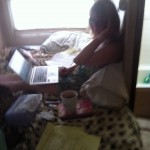 Working on Loser in the Bookmobile. 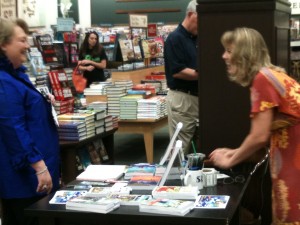 One of my fantastic customers in Birmingham. 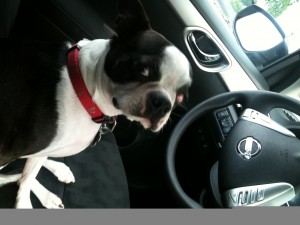 “You expect me to wait outside in this??” 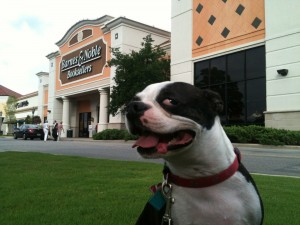 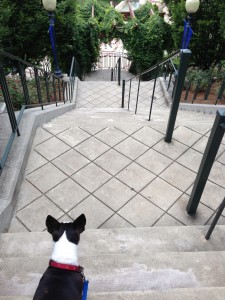 A long way down. 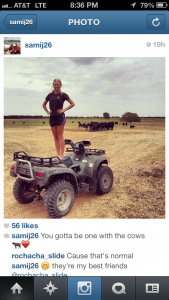 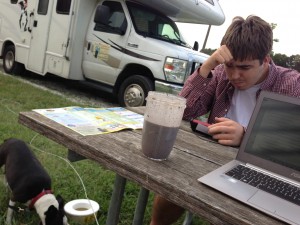 Enjoying fresh air in our first rainless evening in weeks.

We had a fantastic review come in on Leaving Annalise from Romance Times, since it is a romantic mystery after all. Please go check it out. We’ve also had several very nice ones appear on Amazon and Goodreads. Keep the honest reviews coming, my friends, keep them coming.

I’ve ordered my first box of Loser books. Very excited about that.

I’m almost to Amarillo as I type this. I got behind on the blog posts, but I’ll catch up this week.