And that’s how we accidentally spent the night in a meth lab.

Stop the presses! What Kind of Loser Indie Publishes, and How Can I Be One, Too? officially became available online SUNDAY August 11th!!! Paperback and ebook, GET YOUR COPY HERE. While you’re out on Amazon, puh-leeze leave an HONEST review of Leaving Annalise.  And danka!

At 9 am sharp on the day after Jackson, Clark pulled the Bookmobile up to the generator store in Shreveport that had promised Eric they’d have a generator to install when I got there, and finish that installation in two hours. I refused to be optimistic. I’d danced this dance a few times before.

To my delight, they were waiting for me. While I did paperwork in the office, the mechanic pulled the Bookmobile in and immediately started working. As in actually working. As in removing the offensively dead generator which had caused so much woe for the last two weeks.

They were pet friendly, too. Petey joined us in the small lobby/office, where we sat on the floor and worked our electronics. Allie and Clark, mindlessly and happy. Me, focused and productive, cranking out the work. Some things you can count on. The owner arrived about an hour into the morning, and he chatted me up about the books and the tour. Like the woman who had greeted us, he told me how wonderful, concerned, and persuasive Eric was. I get that a lot 🙂

Exactly two hours after the mechanic took custody of the Bookmobile, he came in grinning. “All right, you’re ready to go, ma’am.”

Honestly, it was too wonderful to comprehend. “Seriously? You mean you told us you’d start at nine and that it would take two hours, and you did what said? Do you have any idea how incredible that is?”

He blushed. An older mechanic stepped in. “Shoot, all that’s wrong with most people is they don’t want to work.”

I couldn’t think of a reason to disagree with that.

The owner asked, “Now, are we going to get some of those books or not?”

“You bet you are!” Allie had fetched them for me, and I signed them and handed them over.

“My wife and daughter are going to be so happy.”

“Me too,” the receptionist said.

“Now where is your signing going to be?” he asked.

I told him. For the next twenty minutes, he and the older mechanic argued about the best directions, scratching out each other’s list of turns in a form of debate so natural that I suspected it was a ritual of sorts for them. It didn’t matter. Clark made two wrong turns getting there, so we ended up taking an entirely different way.

For real, y’all, this was the day we needed our generator. Even with it running and the RV a/c on high cool, most people would have still called it hot in there. Petey didn’t mind though. He actually hates being cold and has suffered through some frigid book events, in the name of making sure passersby didn’t report us for animal cruelty. The irony.

Shreveport went quite well. Most stores are dead from 6-7, but we rocked that hour. Around 7, an online friend, Bebe, came in with her husband and son. It was a treat to meet them in person. We again forgot to take pictures. 🙁 Clark has his strengths, but remembering to do things without being told at the moment they are supposed to happen? That’s not one of them. He’s very cute though.

We left Shreveport and set off for Longview. Good thing we weren’t in a hurry, because Clark took three more wrong turns before we got there. He had well and truly lost his (limited) ability to focus. Thank goodness tomorrow was his last day, or we’d probably end up in Mexico. Finally, we crossed the line for the Lone Star state. When we came to our exit, Clark turned the wrong way. He got himself and us straightened out, and we found our way to the road our RV park was to be on. Two hundred yards later, he turned into an RV park on our right.

It was a sight: Sagging trailers perched on cinder blocks. Plywood planks served as makeshift porches. I could make out a toilet in the trees behind the windowless office. And there was no registration information on the door.

“Oh my God, this is the worst one yet.” I texted Marie and Eric.

I looked around me. Hard to believe. “Apparently it’s seen some hard times since then.”

We pulled into an open spot, and, only after I begged, Clark went out and drained the tanks. They were at critical mass, and, since I have a Bionic Woman nose, morning would just be too late.

When morning came, a knock awoke me. I looked out the window. The first thing I saw was the oxygen tank, and then the toothless mouth of a hunched woman. I could get the best of her if I needed to, so I opened the door.

Her voice rasped, “How long y’all planning on staying here? I’m the owner.”

I had emailed the office last night about our late arrival and location. How irritating that she didn’t read her messages before rousting us. “For the length we are registered for. I know we’re not in the right spot, but, like I emailed you, our packet wasn’t on the door when we arrived.”

She cocked her head on its skinny neck, turkey-like. “You must be talking ‘bout that fancy place, down the road. Well, that’ll be 20 dollars. Leave today whenever you like.”

Clark had gotten up, and I turned and fixed him with a steely gaze. He lifted his shoulders in a, “Who, me?” shrug. Allie clapped her hand over her mouth to hold in a giggle.  I grabbed a $20 bill and handed it back to the old woman.

“Drive,” I said to my son. I ran out and unhooked our power, shivering at our surroundings. I was glad we hadn’t been shot or worse last night, because in the light of day it was clear we had spent the night in a backwoods meth lab. I huffed back into the Bookmobile. Allie had pulled out the directions. I read over her shoulder. Our instructions had told us that our RV park would be 2 miles on the left, not the 200 yards on our right that Clark had driven.

Two miles later we pulled into a truly palatial RV park. The owners were quite concerned about us, it turned out, since we had never showed, so we got some love, then hooked into our site.

I decided killing Clark wasn’t worth the jail time, since we’d survived the experience, but only after I had an ugly mood swing and he and I had a chat about focus. I did most of the talking.

Interestingly, when we went to our event that night, most of the customers in the store looked like they lived in or around that same decrepit RV park. It was Breaking Bad, the East Texas version. Few had all their teeth, and many were obviously high. It was like zombie town. I’m not kidding. At twenty minutes until 8, Eric arrived from Houston and came into the store to check on me. At the time, two totally trippin’ young men were talking to me, and making me extremely uncomfortable. Eric could tell, and I knew he was about to move them along, but I waved him off, and eventually they left me alone. Really, the weird encounters were just too numerous to list. I sold a lot of books, but I don’t ever want to repeat the experience. The night will become a book scene someday. 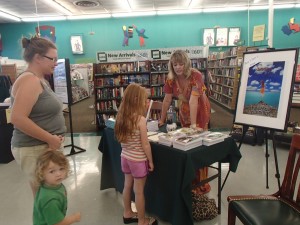 The sole picture from the Shreveport and Tyler events. *sigh*

Before we got back on the road, Eric confessed. “I got pulled over for speeding on the way here.”

“That’s number five for the trip,” I said, laughing.

“It seems the book tour is fascinating to the pokey, even when I’m only driving to meet it. I offered the officer a book for his wife, but he said he couldn’t take it. Apparently they’re all on video tape.”

“Good thing you didn’t tell him I spent last night in a meth lab. He might have been fascinated for a different reason.”

Allie and Clark drove Eric’s car home, and he drove me in the Bookmobile. All was well that ended well, even if it had been a rocky ride not just that day but for a good two weeks. We were due in Houston for the release party of Leaving Annalise, where I would get to sleep in my own bed with my husband for two whole nights.