So who the hell is this Camilla, and what’s she doing at my release party???

The day of the Leaving Annalise release party (Houston version) dawned early, which was good, because we had a truckload of shyte to do to get ready for the event. Even with the hardly-helpful help of Clark and Susanne combined with the intense efforts of Eric, Pamela, and Marie, we showed up just in time with the whites of our eyes showing. In a stroke of fate that was exquisitely, painfully perfect, Marie picked up the catering from Caribbean Cuisine, only to have them call us an hour later to come get the second half of the order, which they had finished late, island-style, and forgotten to tell her about. The good news was that allowed her to retrieve Petey at home where I had forgotten him. Hey, at least I didn’t leave him in South Carolina.

River Oaks Bookstore hosted our party. We love us some River Oaks Bookstore, Houston’s longest-running indie. (Indies rock, both authors and stores!) When we arrived, the first thing I saw was a beautiful flower arrangement in coordinating Leaving Annalise colors. My sweet husband. I pulled out the card. It read, “To Camilla.”

This was mildly disturbing. I’d only been gone two months.

“Who is Camilla, hon?” I asked sweetly.

“No, the woman at the flower shop who took my order.”

Likely story. I wondered if Camilla had received a card for Pamela and was having a similar reaction. OK, I didn’t really wonder that, but everyone at the party still gave Eric hell over it for the next two hours.

The little store nearly burst at the seams before we were through. We had a fantastic time. We even had surprise visitors: my parents! Since it’s Houston, we also had a lot of energy industry folks, prompting Eric to whisper a joke in my ear early on:

How can you tell you’re talking to an extroverted engineer?

He looks at your shoes instead of his.

As expected, it was our biggest event of the summer, so far. Afterwards, we raced home for a short nap, then starting reorganizing, cleaning, and repairing the Bookmobile for its last two weeks on the road. After a lot of flogging, we were even able to get Susanne to pack her stuff. We’d barely closed or eyes before it was time to rise and shine and hit the road. 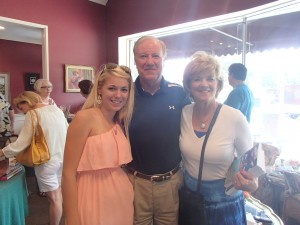 Surprise! GiGi and Poppy with Susanne. 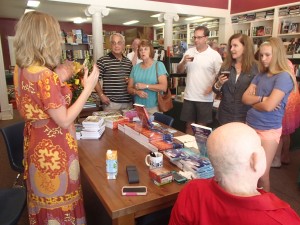 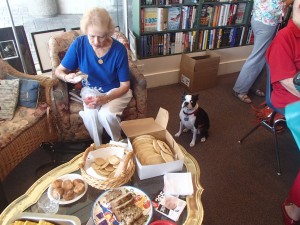 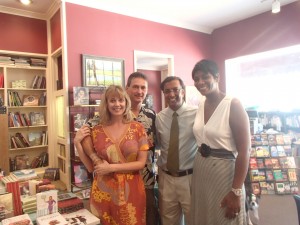 Averell and Sandralee with us 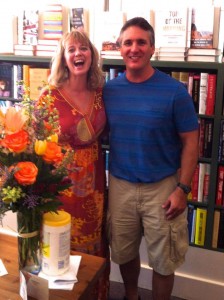 By eveningfall we were all smiles in the front of Hastings in Wichita Falls. I know I always say this, but I am continually surprised when my events go well. As you know from my last two posts, a few have not. But a very few. This one fell in the awesome category. It was also fun to hear from the store manager that Saving Grace was the top-selling title of the week at the store. Eric added that, according to the Ingram rep he had spoken to that week, I was giving the traditionally-published authors a run for their money this summer, too. Thanks to Cynthia and Betsy for marshaling their WF peeps for us. 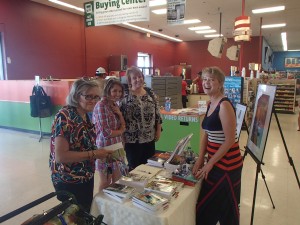 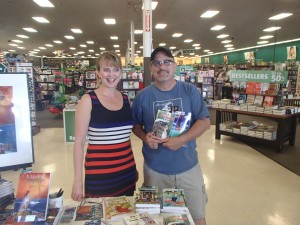 A Weaver, by golly 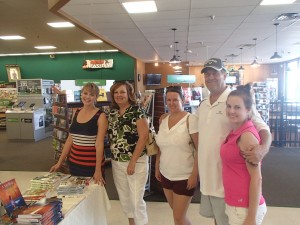 We struck out for Amarillo early the next morning from our camp in Vernon. I had a date for hair beautfication (you know it’s bad when even your husband says, “Please, take a few hours for yourself to have your hair done,” which is code for “OMG someone dumped a bucket of ugly sauce on your head”) with an old high school friend. Eric wanted to take the Bookmobile in for one last check-up before it traversed the mountain states and their long stretches of desolate road. We got a bonus trip to a Natural Grocers store to stock up on clean “cleanse friendly” eats and drinks for the road, too. Heck, we even snuck in a run to Target so Susanne could buy bras. Ignoring my input, she bought one with burgundy polka dots.

It came time to get ready for that night’s Leaving Annalise launch party, part deux, which we did in the Hastings parking lot. Well, in the Bookmobile in the Hastings parking lot anyway. Susanne changed clothes 10 times, easily. The first outfit I dinged: (extremely) holey jeans. I told her to put them away for the duration of the trip. The next few she couldn’t wear because her burgundy polka dots showed. The remainder were just the norm for a 16-yo getting ready for a party.

The store looked awesome. My friend and one of our tour-team members, Stephanie, along with another old friend, Nannette, had spent the afternoon creating an island-themed area outside the Hardback Cafe, complete with coconut monkeys, grass skirted tables, and a Pamela figure in paper maiche effigy. It was a blast. We had a fantastic turnout of friends old and new, including the late and exciting arrival of my friend Betsy who announced her presence by goosing my rear. Many of our friends stayed to see us off, and Stephanie joined Susanne and me for the next leg of the tour. Truly, the event rivaled the one in Houston for awesomeness. The only sad note was dropping Eric at his hotel so he could return to work in Houston bright and early the next morning. I hoped this time he would remember my name is not Camilla. 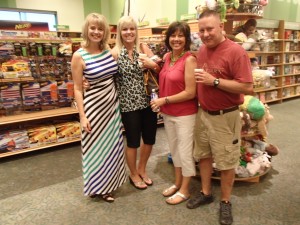 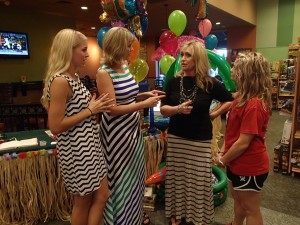 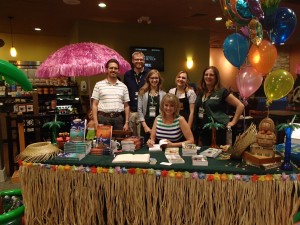 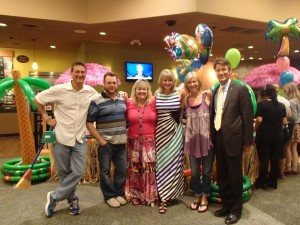 Dear, dear friends (and will someone photoshop Eric’s eyes open? the man was seriously tired) 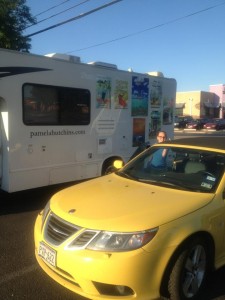 Gracie and her father’s car catching a Bookmobile photo opp

By midnight we were in Clayton, New Mexico. Unfortunately, I had to deal with an overly full gray water tank before bed. I discovered, in the dark, that the new dump hose Eric had bought me was really, really long, and the opening to the dump was really, really small. By time I realized our flow rate exceeded its capacity and reduced flow, we had a small blue lake of perfumed refuse on the driver’s side of the Bookmobile. Trust me, that’s why it’s always better to take care of these issues in the dark.

Note: you’ll have lots more pictures to enjoy now that Susanne has replaced Clark Kent on the tour, but maybe fewer hilarities and disasters.