What’s a Texas girl have to do to get food in Colorado?

Looking for beta readers for the third book in the Katie & Annalise series. Note: if you were a beta before who did not send feedback or post an honest review, you’re not going to get picked. 😉 Email me: pamela@pamelafaganhutchins.com.

Meanwhile, honest reviews on all my books on Amazon and/or Goodreads are humbly requested and appreciated immeasurably.

Stephanie, Susanne, and I blew in to Colorado Springs like a Texas twister, which is what we felt like, too, since we’d give Susanne her first stint behind the wheel, and all survived it. I didn’t breathe the whole time, and she never quit complaining about how driving it made her shoulder hurt. She also never left the left lane without a reminder, so we earned some angry looks (that turned to goofy grins when they saw her) from cowboys and truckers who passed us on the right.

So we made it the Springs safely and without me turning blue. Once there, we owned it. You’ve never seen a bookseller like Stephanie, I can promise you. Once the owner of an indie bookstore (A Book to Remember), she wowed the crowd in Colorado Springs, and we’d sold 40 books in the first 45 minutes. The mini-frenzy quieted over the dinner hour, which was perfect, as in walked my UT Law-Austin roomie Jennifer with her two lovely teen daughters, followed shortly thereafter by the absolutely dear Barbara, a friend from Dallas days. We sold a few more books to strangers, but mostly we put our feet up and yakked the rest of the night away. 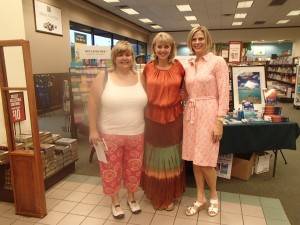 Barbara joined us to meet Petey after the event, and, while she was in the Bookmobile, learned that Susanne and I were on a clean gut cleanse while poor, starving Stephanie was not. Barbara snatched Stephanie away for some emergency Black-Eyed Pea to go.

Barbara and Stephanie agreed that it takes a Texas woman-type of hospitality to offer to drive a stranger to dinner, and the same type of woman to say yes to it. They were instant fast friends. And Stephanie got to chew. It’s a miracle we didn’t starve her to death.

Siri did us dirty that night. Our two hour drive to our campsite near the Denver airport turned into three as we re-routed and re-routed due to construction, wrong turns, and–dare I say it?–wrong directions.  We finally found our park. There were rabbits everywhere. Literally, everywhere. We dodged them until we got to our site, hooked up around midnight, and opened our windows to enjoy the cool night air. We weren’t the only ones enjoying it, though. By 3 am, we had to shut the Bookmobile up and throw on the a/c due to our friend Mr. Skunk who came a’visitin’.

The next morning we got up early to get ready before Steph’s flight back to Amarillo. More stink awaited us. Apparently our rv site was “dog crap central” for the entire park, and the piles stood between us and the bathrooms like a minefield. Susanne and I made it through unharmed, but Stephanie’s shoes were not as lucky.

I’m not sure who was sorrier to see Stephanie go, Susanne or me, but we both love her dearly, and we both appreciated her invaluable in-store assistance. Stephanie also just seems to “get” Susanne, maybe because she is so much like the teenage girl Stephanie befriended in high school in Amarillo 30 years ago. 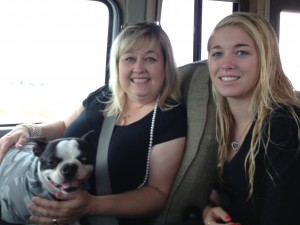 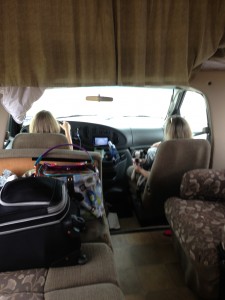 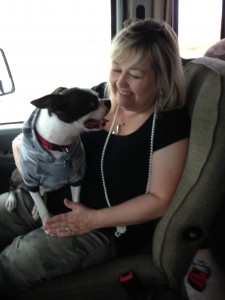 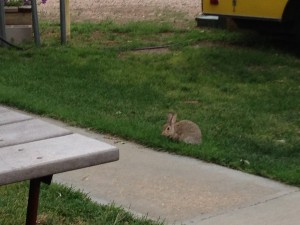 Susanne and I had a really nice day in Boulder. We escorted Petey through Whole Pets and let him select a toy and some treats (I know, I spoil both of them way too much), and we ate and marketed at Whole Foods. She tagged along with me while I met my EPS colleague Denise and a business associate for lunch and tea at The Tea House, and she grumbled only slightly when I wanted to walk the two miles back to Barnes and Noble. It was an unseasonably cool day; why not make the most of it? 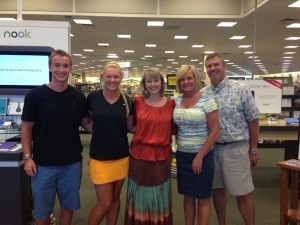 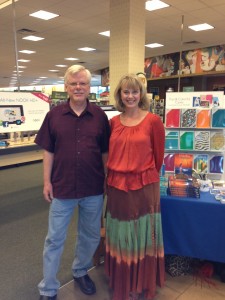 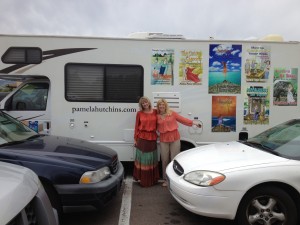 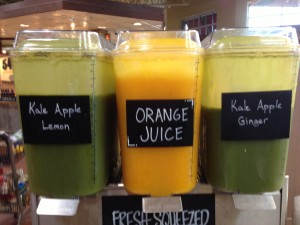 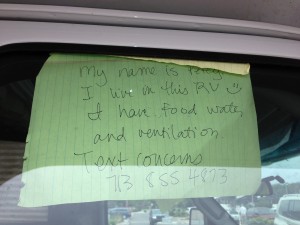 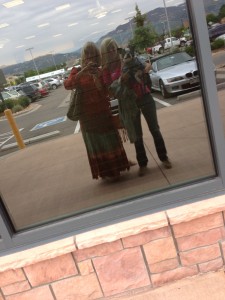 Having fun with my youngest.

I didn’t really expect to see familiar faces that night, but within the first five minutes I got two incredible surprises: my cousin David and my other UT Law-Austin roommate, Tina, and her mother. They were followed by a referral from a Houston friend and the family of Liz’s boyfriend. Wow! Our quiet evening in Boulder quickly became a happy, rowdy gathering.

We had a long drive that night to Laramie, WY, and an even longer one to Salt Lake City for the event the next day, so we got out of there fast. The drive to Laramie got interesting in Wyoming. The crosswinds were impressive and we ran into some eerily beautiful but scary fog. We landed safely before midnight. However, it was 50 degrees, and the sundress I had on from Boulder wasn’t cutting it.

It was our first night to sleep sans a/c OR open windows, and I loved it. Could it be that this Western leg of the tour was charmed? It sure felt like it so far.