As much as I needed to work and wanted to let my daughter drive at least part of the way from Laramie to Salt Lake City, I didn’t dare wake a 16-yo at 5:30 am to take a driving shift. I pushed off without disturbing her and hit the road with Petey riding shotgun. I felt surprisingly good for a woman off coffee for two weeks, but it is the thing I miss most on our clean gut cleanse, especially at dawn. Even more so at dawn in major fog.

Fog. Fog, fog, and more fog. Who knew that summer in Wyoming was fog time? It got so bad that I couldn’t see the truck in front of me from 50 feet back. I took my cue from the 18-wheelers and put on my hazards. Everyone slowed considerably except a few local yayhoos with death wishes, but no one pulled over. It was pretty darn nerve-wracking, and my eyes, hands, and back hurt from the strain after an hour, but we finally broke through into big sky country. In fact, then I could watch the fog serpentine over the ground, sinuous and slithery, reminding me of the Dementors in Harry Potter. It was a cool experience since it ended well.

When I pulled over to let Susanne drive, we were in a town that housed the state prison. It looked like it, and so did the people. I was a wee bit nervous, especially since my company, EPS, has done a lot of work in this area for a great client, whose employees had warned us not to drink anything unless it came from a sealed container since the locals liked to rufie females. I don’t know if that’s true, but I wasn’t taking any chances. 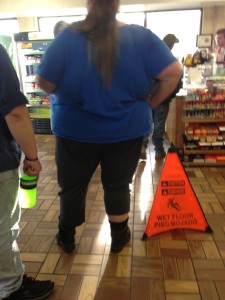 I felt pretty wimpy standing behind her. Wyoming isn’t for sissies. 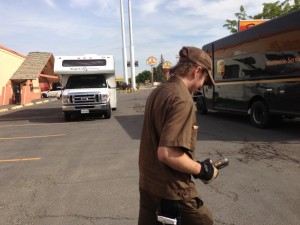 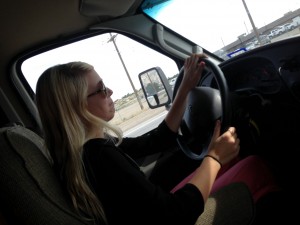 As soon as Susanne took the wheel, look what she came upon (see pic above)? I think he looked pretty scared, don’t you? Methinks her UPS truck reputation precedes her. Anyway, she mostly drove just fine for the next hour or two, and I managed to get in about 15 minutes of work in between coaching her and wringing my hands. Finally, we entered Utah and immediately hit steep, winding downhill roads and rock canyons. She took a few curves too fast, and it scared the bejeebers out of both of us, so I had her pull over at the first rest stop we came to for a driver switch. We managed a photo opp before we hit the road again. 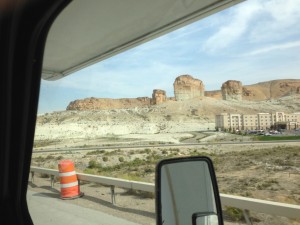 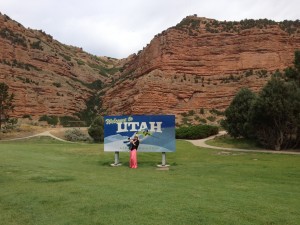 The drive through northeastern Utah was stunning. I had forgotten that Salt Lake had hosted the Winter Olympics a few years ago until in Provo we came upon ski jumps and commemorative Olympic road decorations. From Provo all the way into SLC was a harrowing downward plunge with multiple runaway truck escapes/stops. The Bookmobile handled it like a boss, but I was very glad when the raging road spit us out into the city at the bottom.

We had time to check into our RV Park and do laundry, shower, and eat before we shopped Whole Foods and went to our event. In the meantime, a dramatic wind storm had swept in and we thought we were in for a barnstormer. As fast as it sprung up, it died down, though, and by the time we got to Barnes and Noble Sugarhouse, it was almost over. While the book event was fairly slow (predictable for a Wednesday night), we sold a respectable number of books, and I was so pleased when the cousin of a good Cruzan friend showed up bearing his “free book” email. The manager on duty was a part-time solo practice attorney, and she and I bonded over the law in between sales. 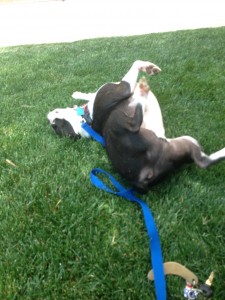 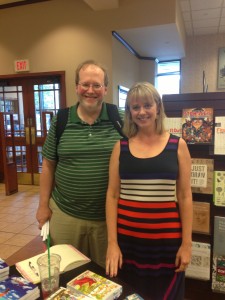 Eric’s plane arrived shortly after we finished, and it was so good to pick him up in another strange city. He brings me a calm familiarity at the same time as he increases my heart rate, and both things are very, very good. We overnighted in SLC, then left early for San Francisco via a stop in Reno. This was my first experience with the Great Salt Lake, and it was amazing. I thoroughly enjoyed every second of Utah, and then we hit NEVADA.

Nevada was Utah with all the color leeched out. It was like driving though grayscale, but with dramatic wind gusts that had Eric whiteknuckling the steering wheel. The roads were bad, the gas was atrociously expensive, and the drive seemed interminable. Reno was an oasis, and when we had passed through it, the terrain immediately became less desolate. We stopped in the foothills, right before the California border, to have coffee with a childhood friend of my mother’s, who we had never met, but who had assisted us with bookstores in the area. Dianne was very dear, and our time with her was all too short. We gave her the special RV and Petey tour, and she showed us kindergarten-age pictures of her and my mom. 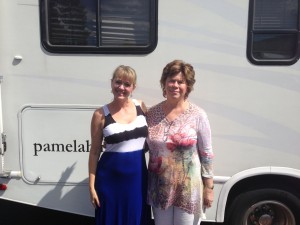 The roads between SLC and Reno were hard on Eric but great for me as I churned through pre-publication of Loser. I had decided to test out Scrivener, and, if I liked it, use it to create Loser’s e-book. Well, I was sorely disappointed in ole Scrivener and after six hours beating my head against it decided that my Pressbooks method made me far, far happier. I abandoned the effort.

The drive from Reno to San Fran was gorgeous, but work became mostly impossible due to windy, nausea-inducing roads. I opted for holding Eric’s hand instead, which isn’t as easy as it sounds in the Bookmobile since the seats are far apart with nothing to rest hands on in between, and because Eric kept reclaiming his to drive. Oh well. It was fun in short bursts. We arrived at our high-priced and low-rent RV park and passed a quick night before rising early to give me more time to work on my e-book and for all of us to get to San Mateo to meet Eric’s boyhood friends for a late breakfast/early lunch.

Other than a few crazies, like the guy who insisted on telling me every detail of his coming out to all the people in his life including acting out both sides of each dialogue, the event rocked. Not only did we have Cruzans Ted, Val, and Danny, but we had two of their friends, an old client of mine, a current colleague of mine, and locals who gave Saving Grace and Leaving Annalise a warm welcome. We ended up at Danny’s house enjoying his Trading Spaces-worthy backyard remodel with his wife Laura, their two bischon frise’s, Ted, Val, and friends. We begged off early to make our drive. 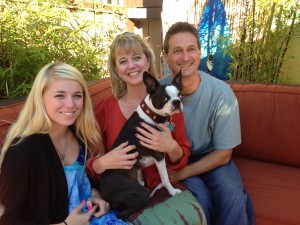 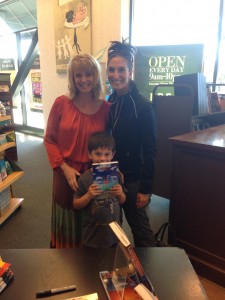 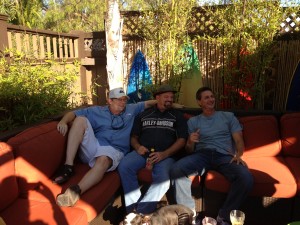 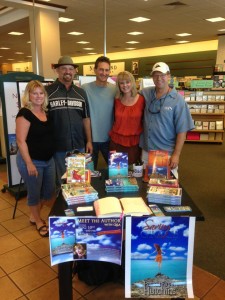 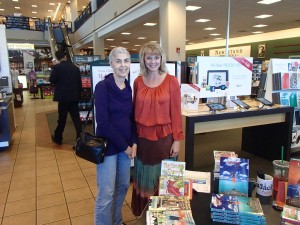 While it is possible to take the interstate from San Fran to LA, there are not RV Parks along that route, so we ended up on the 101, winding our way through dramatic landscapes and sea views, to San Luis Obispo, the halfway point, and our bunking down spot. We squeezed into the smallest spot we’d paid to park in for the highest dollars , and went to sleep as fast as we could, because tomorrow promised to be one of our toughest yet: a four-hour drive, a daughter to visit, two events, and Eric on a red-eye back to Dallas.

We would all need our strength.