Beware the Lights at the End of the Tunnel

Susanne and I set off at dawn on the 15th, El Paso or bust. She and Petey immediately snoozed while I marveled at the scenery. Tucson is a for-sure comeback place, as is Texas Canyon and its marvelous and incongruous red rocks. I took pictures blindly, holding my iPhone over my head and snapping wildly, and they don’t do it justice. The drive was long-ish. Let’s call it five hours, door to door. The cross winds were so fierce I didn’t dare let Susanne drive, so when we got there I had a lot of work left to do. However, I had forgotten that El Paso observes Mountain Daylight Time, not Central Standard Time, so I had an extra hour to work. 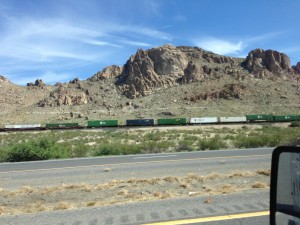 As soon as we got to New Mexico, the dramatic scenery turned drab and desolate, but here’s one last scenic shot as we entered the Land of Enchantment. Still, I felt relief to be in the state bordering my own home state. The following random pictures of Arizona are in reverse chronological order. 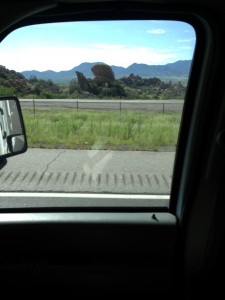 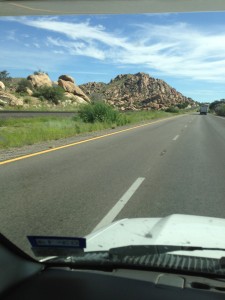 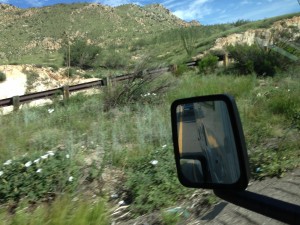 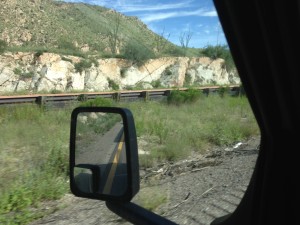 The event was a blast, 100% because the incomparable Marty Boyd came and stayed the whole time. I’d never met Marty IRL, but I had known her as Twitty Boyd, originally a contact of my husband’s, for years. She helped Susanne wrangle customers for me, and even was responsible for a friend of hers who came. It wasn’t a banner sales event, but we did respectably, and we had fun. As we were leaving, Marty warned me to be extra careful , as we were driving through Far West Texas to Van Horn. She feared we might attract the wrong kind of attention, and, now that I was safely back in Texas, I told her about my ole pink shotgun, shell chambered, that I kept above my head. 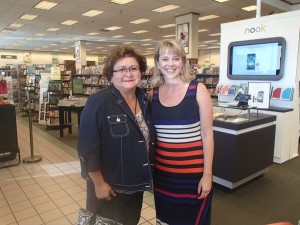 “Good,” she said. She advised us to keep it handy , just in case. I didn’t think much about it. We’d made it through the Big Spring Man Camps unscathed, and survived a night in an East Texas Meth Lab, after all.

We pulled out of the parking lot. Immediately, Siri pulled a switcheroo last minute direction on us, and we got lost on the south side of the interstate. For those not from ’round here, south of El Paso is Mexico, and the sprawling Ciudad Juarez. We managed to avoid an unplanned border crossing, but when we got back on the correct road, spikes of lightning ripped across the pitch black sky. By the time we were up to speed, the sky was falling. Traffic slowed to a crawl, vehicles pulled over, and we soldiered on through the rain.

The speed limit moved up to 80 outside of town. While traffic wasn’t heavy, we battled rain, 18-wheelers, and no lights. And I’d forgotten to get gas. We stopped when I saw an exit with a Shell sign.

The station was dark, but a van was parked at one of the 24-hour pumps. I saw a woman. That was good. I pulled up to the pumps on the opposite side.

That’s when I saw the man pumping gas. His stomach rolled over his pants in his wife-beater white tank. He didn’t look like he had bathed and shaved in a while, if ever. The expression on his face said he didn’t like people any better than water and soap. I glanced at the woman, fearful for her, but I needn’t have worried. She could probably kick his ass and truss him like a Thanksgiving turkey.

I hadn’t even put the car in park, so I punched the gas and bolted back for I-10.

“We can make it to Van Horn, but in the meantime we should keep a lookout for a safe-looking station,” I explained.

“OK,” Susanne said, but her voice didn’t show a lot of confidence in Mommy Dearest.

My pulse had quickened, and I willed myself to relax. I knew from experience that the tighter my grip was on the steering wheel, the more prone I was to jerky, unplanned movements. We were cruising at 77, mainly to stay ahead of the tractor-trailers. I didn’t want any unplanned swerves. Just then a giant bus passed on the left, doing 85. I fought the Bookmobile to stay on the road in its backlash, and the windshield wipers flapped frantically to clear the muddy water.

I passed a white van. Long, white, out at night in Far West Texas. That can’t be a nice Catholic family heading to church. It wasn’t. The orange-clad occupants stared back out windows at me, over the words “Department of Corrections” stenciled on the side.

We came upon a town, of sorts. The road was not lit, and, in the rain, the reflectors were hard to see. Suddenly the road curved left. Between the dark, the rain, and my late-40s eyes, my depth perception was whack. I panicked, and hit the brakes, managing not to skid as I brought my speed down to 65.

I wanted to call my husband. Two things stood in my way. The first? We’d had an argument before I went into the event in El Paso. Really, it was a toss-up as to which of us was more fried by this summer. We were both a mess, and it was showing in our short-tempered interactions. I needed to get home. I needed to sleep. I needed to hug my husband and help him sleep. I couldn’t call and dump more stress on him, not when the problems I was having were mostly in my head, and my cowardly heart. The second reason, and the only one that really stopped me? I had no signal.

Oh, and there wasn’t a gas station I was willing to stop at in that town either, whatever-its-name-was. It reminded me a little much of our East Texas Meth Lab experience.

The signs promised us that we’d get to Van Horn in an hour, and we’d come an hour and a half so far. My eyes burned. I was thirsty, but I didn’t want to drink as I needed to go the bathroom. So my head started to hurt, too.

The terrain changed, and we were climbing. Road construction moved us down to one lane, with a concrete retaining wall on one side. The giant sail of the Bookmobile swayed dangerously close to it.

“Text Eric for me,” I blurted to Susanne. “Tell him I want to look for alternatives to Van Horn. Tell him I just have a bad vibe about being there.”

“I don’t have signal on my phone,” she said.

“You’ve got some.” She texted rapidly. “He wants you to call him. He’s worried.”

“Can you hook up my headphones and hand them to me, then connect us?”

I waited, but I didn’t hear ringing. I let it keep trying, then forgot about it, as we came upon a Border Patrol checkpoint.

“Get your feet off the windshield, please,” I told Susanne, mostly because it made her dress hang around her upper thighs. We were about to be under spotlights in the three lanes through the checkpoint, and all the trucks we had passed and had been passed by in the last hour would finally have a great view inside our cab, and her face was enough to entice them. Add her teenage legs and bum and we’d be trampled in a stampede.

The Caucasian Border Agent stepped forward while dog handlers made a lap of the Bookmobile.

“Just you ladies in there?” he asked.

“Yes, and one Boston terrier,” I said.

“You’ll want to be careful.”

“Yes, sir, very.” Unlike the Illinois police, I suspected this guy would approve of ole pink if I told him about her.

He waved us on.

I looked down at the phone. It showed 3:12 minutes. I thought the counter only started up when a call connected.

“Text Eric and ask him if we were connected,” I told Susanne.

She did. “He says you were and he could hear you the whole time.”

Great. I had dropped my phone in the toilet a week ago. Since then, the ear speaker didn’t work, and now the phone jack, leaving me only the speaker phone feature, which wasn’t a great option in the loud confines of the Bookmobile.

That worked. Eric urged me, “Drive south from Van Horn to Marfa. It’s only 70 more miles, and no further drive from there to New Braunfels the next day than you’re already in for.”

“Let me check out Van Horn, first. It may be fine. And I have to stop there for gas no matter what. If they don’t have a good gas station, I can’t go any further anyway.”

“Maybe they’ll have a hotel.”

“But the RV park is already paid for.”

“A small thing compared to safety. Plus, you aren’t going to sleep tonight if you’re scared.”

We hung up. A truck pulled past us on the left, then slowed. I figured he was slowing down to read all the Bookmobile emblems, as had happened all summer long, but he wasn’t. He pulled even with our cab and I could feel his eyes enter our space. I pictured him: big, sweaty, hairy, but I didn’t look his way. I pressed Eric’s name on Susanne’s phone. The headphones were still in my ears. I lifted the phone so the other driver could see it.

“Are you OK?” Eric asked, in greeting.

“Yes, I just want this asshole next to us to see me make a call. He’s hovering and staring.”

“Do you want me to call the cops?”

The truck resumed its earlier speed and began to pull away from us. “No, he got the hint and moved on.” But he knows what vehicle we are in. It’s not like we’re hard to miss.

“I’m really worried about you.”

“I know you are. Let me concentrate on driving safely and getting to Van Horn, and then I’ll call you as soon as I find a good gas station.”

We hung up again. I drove on silently. It seemed my tension had spread: Petey sat sentinel in Susanne’s lap as she kept watch. I could count the times on one hand that Susanne stayed up after an event while I drove, and it was nearly midnight, thanks to our second time change of the day.

And then we saw them. Lights. Van Horn.