If this doesn’t make you laugh until you pee, you have the sense of humor of a rock. And I mean that in the best possible way.

Our house has been all about heifer procurement lately—show heifers, that is, big beautiful bovines with limpid eyes and calf-bearing hips. You see, our 16-year old daughter traded swimming for FFA—Future Farmers of America—and her project for the next two years is to be a heifer.

We’ve scoured websites for weeks. Shorthorns, Brangus, Brahmans, Polled Herefords. Ah, the possibilities. Susanne regaled us with the relevant facts on each breed. “Brahmans are a little big, Mom, and I’m a first-timer.” “I don’t like Brangus.” “Shorthorns are so cute.”

We had one month within which to buy one so that Susanne and the as-yet-just-dreamed-of heifer would be eligible for 2014 shows.  She and her FFA sponsor had their eyes on an auction in Dallas, and Susanne glued herself to their website. It was like Match.com for livestock-obsessed teenagers. She narrowed it down to three potentials: two Chianinas and one Polled Hereford. Her sponsor recommended the one she favored, Lot #4, a fawn-colored Chianina, which he called a Chi and pronounced “Key.”

“He said that she’s real gentle, that a ten-year old trained her on the lead. Her hair is easier to manage than a Hereford. I’m going to call her Dixie,” Susanne breathed.

We ignored him. “She sounds perfect,” I said.

“If her price goes over my budget I’ll pay the extra out of my Christmas and birthday money. I don’t need any presents,” she said.

“I have to be on my computer Saturday for the final hour of the auction. I can put a proxy bid in for up to our maximum, but I need to be there in case there’s a problem.”

“I’m at a conference, but I’ll be available by phone.” 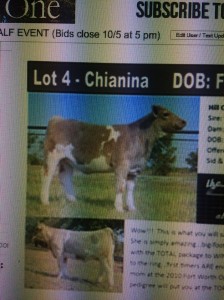 The appointed day and hour came. Susanne and I once again talked through the procedure. Her bid was in. She would sit tight, wait it out, click nothing. I would stand by.

Forty-five minutes passed; the auction was running late. Then my phone rang.

“Mom, please don’t be mad, please, I think I messed up, they just announced I got Lot 1. It’s a Charolais. I don’t even know what a Charolais is.”

“It’s OK, sweetie, Charolais are big white cows. It will be fine.” I tried to calm her down. I knew she would fall in love with whatever heifer she ended up with.

“You don’t understand,” she wailed. “I put the proxy in, then I was looking at Dixie’s screen. A button started flashing that said, ‘Bid now,” and I thought it was her turn, and the amount was the same amount she was sitting at. So I clicked it.” Here, a sob broke through. “But it was for Lot 1. And my bid is still in for Dixie.”

Oh. Oh, no. We were staring two cows in the face. But there was no reason to get everyone in a tizzy. Whatever would be would be and we would work it out. I channeled my inner Carol Brady. “It’s OK, honey. It’s not great, but it’s OK. We can sell the second one. If you even get the Chi. I mean, I hope you do, but it’s not a sure thing.”

She gave no sign that my earnest pep talk had done any good. “OH NO,” she moaned. “OH, NO NO NO.”

“They just announced that Lot 2 went to me, too. Mom, I wasn’t anywhere near the computer. I promise. I didn’t click anything on Lot 2. Mom, I HAVE TWO CHAROLAIS!!”

My mind raced. What was going on? “Do you think maybe your proxy got set up to apply to ALL the heifers?’

“How many are there?”

That was nauseating. “Listen carefully. You have to get hold of Mr. P and the breeder, and right now. If you tell them, immediately, they might be able to fix this. Like sell the cows to the 2nd place bidders. If we wait, the other bidders will either buy other cows, or, if all the heifers go to us, they might end up in 2nd place for multiple cows. It will get ugly fast.”

In her most pathetic voice she said, “I can’t.”

I heard a helpful shout from Marie in the background. “Susanne, you just got yourself another cow.” She sounded quite amused.

“GET ON THE PHONE NOW.” Woopsie, I forgot to use my Carol voice.

“OK, OK.” The second OK was a four-syllable word.

We clicked off. I sat there for a nanosecond, dumbfounded. Oh My God. My daughter had bid on the entire herd. If this went down, we wouldn’t be building our house in Nowheresville next year after all. I checked my mood’s temperature. I wasn’t mad. Shockingly, what I felt was something more like bemusement. Possibly spontaneous hilarity. Or maybe I was just in hysterical shock.

Eric had been listening in on the entire exchange. “So, we’re about to be ranchers?” he asked. Like me, he didn’t really seem upset even though he had to have done the math in his head, too.

“It appears that way.”

I grinned at him. He grinned back. Then both of us started heehawing. This was funny. This was really, really funny. It was awful. Terrifying. Potentially quite a problem. But funny. So damn funny.

He wiped his eyes. “Maybe your dad wants to buy a few cows for his herd?”

“I can put ads up on Craiglist and show cows in our front yard all week.”

He nodded. “And then, when the last one’s sold, we kill Susanne.”

His phone dinged with a text. He looked down and read it aloud. “Marie said you got three cows for Susanne. That’s not fair.” This from 20-year old Liz.

“We are NOT keeping three cows. Chill,” he sent back.

“Can you at least get me one alpaca?” she texted.

To me, Eric said, “I think I’m going to ignore that last one.”

We cracked up again. The phone rang. Ah, it was the source of our trouble.

Susanne sounded much calmer. “The breeder talked to me. I told him I only wanted one heifer. He’s going to see if he can sell the others and get me the Chi, and they’re cancelling my proxy bid.”

“That’s fantastic! Did he happen to say what number we were on?”

“Of course he did. You’re never going to live this down. I’m afraid you’re going to be infamous in FFA circles in the state of Texas. Maybe all the way into Oklahoma.”

“I KNOW,” she said, and I could imagine the roll of her eyes.

An hour later, the breeder called. He had managed to sell off all our accidentally purchased cows. He was gracious about it, too, which was just the final proof that he is a hell of a guy.

He congratulated Susanne on her Charolais.

“Not the Chi?” she squeaked.

He let her stew in it a minute then said, “Nah, I’m just pulling your leg. Congratulations on your little Chi. We’ll send her to Houston with your friend tomorrow.”

It’s a good thing we like him so much, because in the dynamics of the stock show world, he and Susanne are now partners. Stock show wins raise prices and sell more cows for a breeder, so he will coach and coax her and Dixie along, from a distance.

And that is how we all came to spend Sunday evening in a mid-Houston barn, waiting on the walking slab of beef that the FFA sponsor had taken to calling “Susanne’s little darlin’.” The trailer pulled up. They opened the back gate and a big black two-year old heifer barreled out. Behind her skittered 700 dainty pounds of creamy cafe au lait sweetness on the hoof. Dixie. 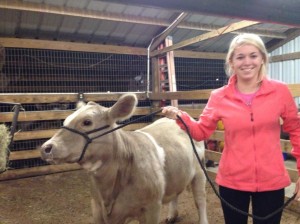 The new love of Susanne’s life.

Only one of her, thank God.

OK, I admit it. We’re all a little besotted 🙂 Houston Livestock Show or bust!

p.s. For the next two years, at every show Dixie and Susanne attended, there was someone there who remembered she was the girl who bought the entire herd of cows. <3 <3 <3