Before I thrill you with tales of ice and frigid temps, let me share three quickies:

1. Check out my “9 TV Mystery Series with Literary Ties” and share your faves in the comments: http://lauries-interviews.blogspot.com/2014/02/finding-harmony-3-in-katie-annalise.html

2. I love it when a male reviewer realizes I don’t write chick books :-):  (his “review” is a comment to the showcase post, so scroll down — I think you should give this guy some luv!)

3. I was tapped for a Q&A panel out of 75 writers featured at the Houston Authors Bash. Sweet! 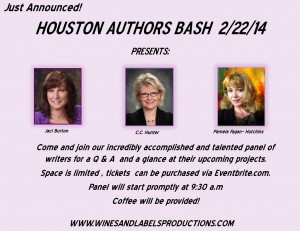 Now, on to the arctic weather:

So, maybe it was only chilly (30-40s) for the Finding Harmony release celebration/birthday party for moi in my parents’ tiny hometown of DeLeon, TX.

But, still, the weather gave my husband epic nosebleeds. Eric doesn’t suffer from pansy-pants nosebleeds. He gets the all-day who-was-murdered-in-this-bathroom nosebleeds that can really spoil a good work shirt (and awesome presentation to clients). He was afraid he was going to have to go in and get it cauterized again before his Siberia trip next month, but Dr. Dad came to the rescue. For those that don’t know it, Dr. Dad is enjoying his retirement by working two or three 12-hour shifts a week in the county emergency room. The man is 67 and going strong. Anyway, he said they use this type of cure for nosebleeders that visit him in the ER, and that it always works: 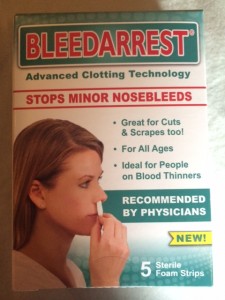 He added that vaseline applied am and pm with a q-tip to the inside of the nose (stick that sucker up until you think you’re going to jiggle your brain, and give it a good twirl), plus absolutely zen devotion to 64+ ounces of fluid per day go a long way toward prevention. In a pinch (pun intended), he recommends sitting up with your head back and squeezing your nose hard for ten straight minutes below the bony part. If you can hold it that long, it will stop the bleed.

Eric had tried everything but never heard of the BleedArrest (and its brethren) remedy. Works for hemophiliacs, too. We picked some up at WalGreens. He’d been bleeding every day for hours for two weeks. After Bleed Arrest? It stopped it cold, and it didn’t restart, even when he rattled the house with his sneezing (yeah, he’s also had the flu, and kept working, despite his wife’s advice — but that’s another story).

Here’s pics of the soiree at The Scarlet Ibis (and continuing next door at Two or More): 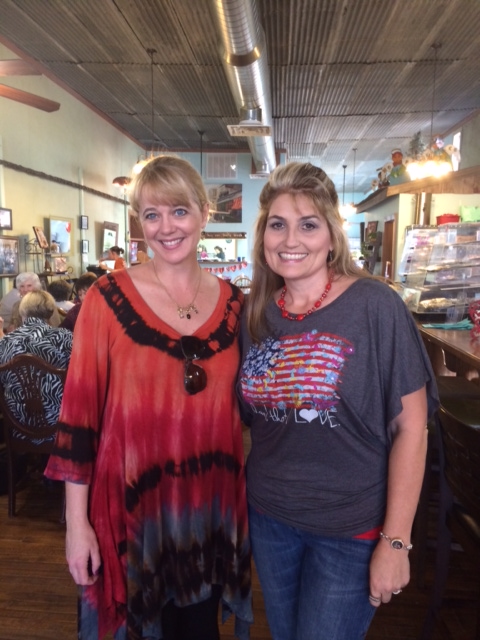 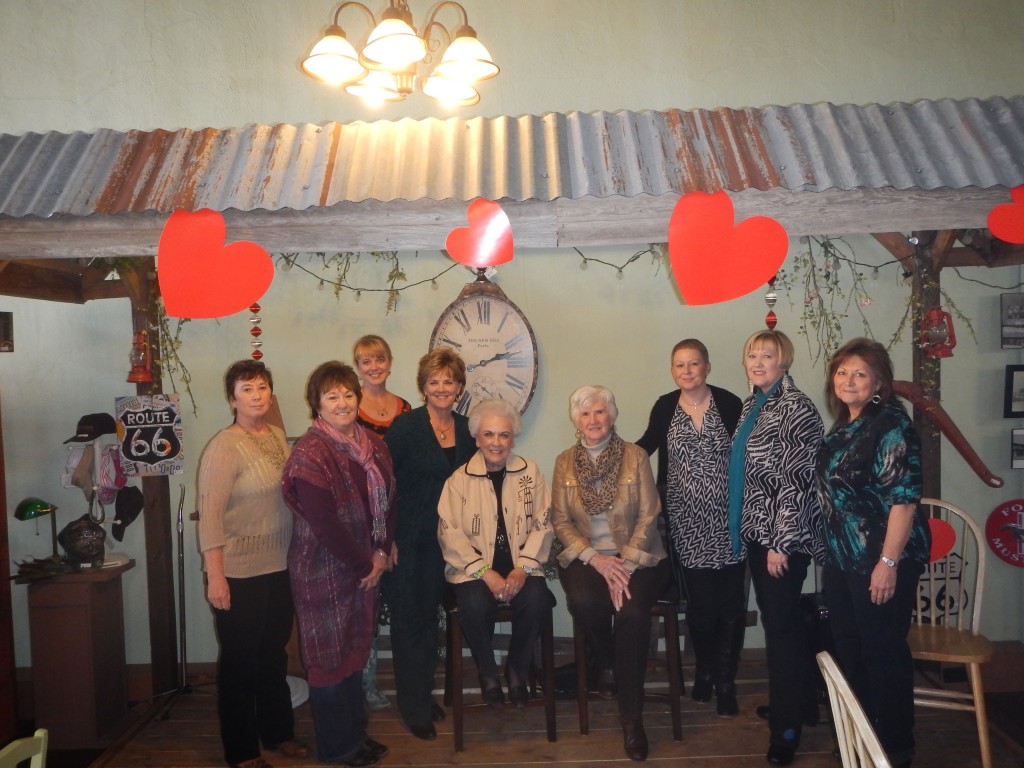 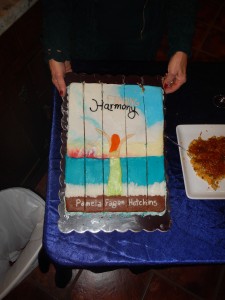 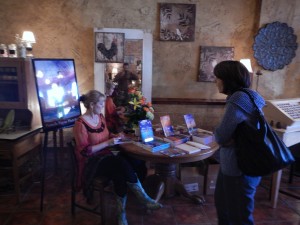 Mom bought me this: 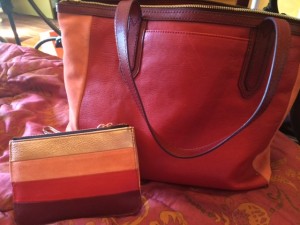 Squee! My first Fossil purse, and a mini purse for those times you can’t carry the full size! (I would NEVER pay that much for a purse myself!)

Eric bought me this: 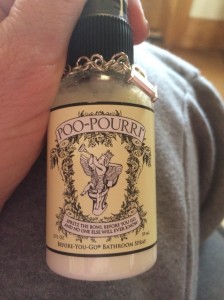 Don’t scoff. This stuff works. Check out the commercial, too (hilarious, I promise it’s worth the click): http://www.youtube.com/watch?v=ZKLnhuzh9uY

I even got an early Valentine’s present: 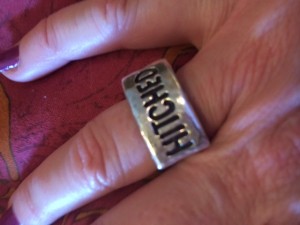 We watched We’re the Millers with my parents at the suggestion of my (Marine) brother. It was hilarious, if you’re into offensive and inappropriate humor (we are). Eric managed to hobble through a nature walk with me (did I mention he is REALLY sick), and it was lovely.

And, finally, I had a great writing (re-writing) day on Going for Kona, and made it through a whole chapter. That’s a good days’ re-write, trust me. 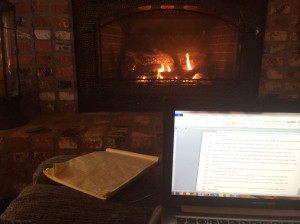 So the weekend was, obviously, great. My next event was a little trickier. I had to haul ass up to Sweetwater. Chilly turned to frigid and sunny turned to sloggy drizzle. Dad threw a couple of bags of cow feed in the back of our four-wheel drive pickup to help with traction, and I set off. It was a winter wonderland, minus the snow and heavy on the ice. I gave myself an extra hour and was still half an hour later than I wanted to be, but at least I didn’t end up bum over teakettle on the side of the road. Twice I saw people crawling out of their trucks from that position, immediately post flipping. I can’t count the 18-wheelers I saw in the median or on the side of the road, jack-knifed (Yet the jerks kept flying by me, and I was going 50 MPH — I wish my tax dollars weren’t diluted by public services to help those who recklessly endanger the lives of others. 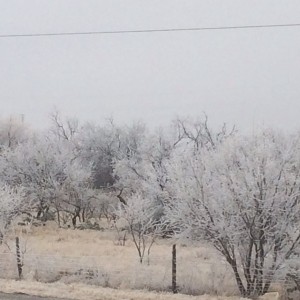 I was afraid the “Let’s Talk Books” book club, a seven-year old library-sponsored group, would stay at home because of the 22-degree temperature, but I needn’t have worried. The rock stars came in force. Awesome Erica, the library director, and Lovely Leigh had decorated for Valentine’s. Lunch was served. They asked q’s. I rambled on. They bought a lot of books that more than paid for me gas (thanks, guys!), and even gave me a silver heart bookmark and hot pink wallet. How did they know that I’d love them?

It was fun! Here’s the evidence: 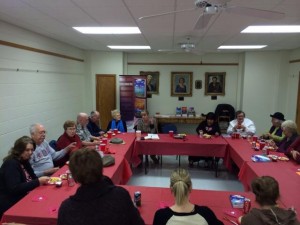 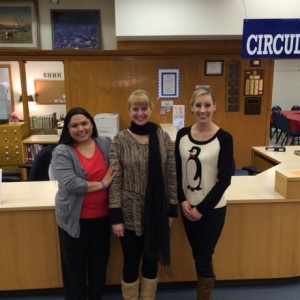 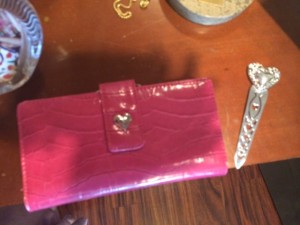 The drive home was much easier. It was still in the 20’s and raining, but for some reason the roads had thawed. I decided to press on for Houston after I picked Petey up from Grandma’s house (where he took an unauthorized chair nap): 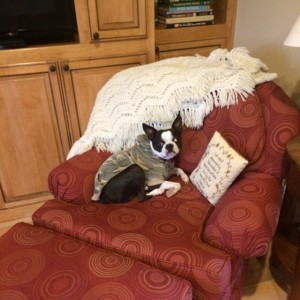 I made it home safe and sound to find this in our room: 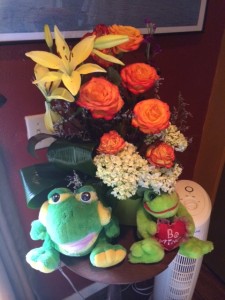 Because I have the world’s most awesome husband. He even gave me this, too: 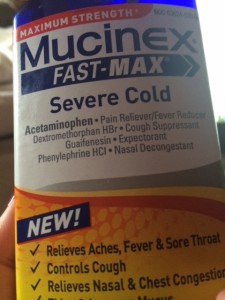 After he’d given me his crud (but my parents had it worst of all, so I’m not complaining). This is THE world’s best cold-flu medicine, IMHO.

Now, on to San Antonio, with Dixie and Susanne, for a trip around the ring and a calf scramble. Woot!