Spouting Off, Just This Once 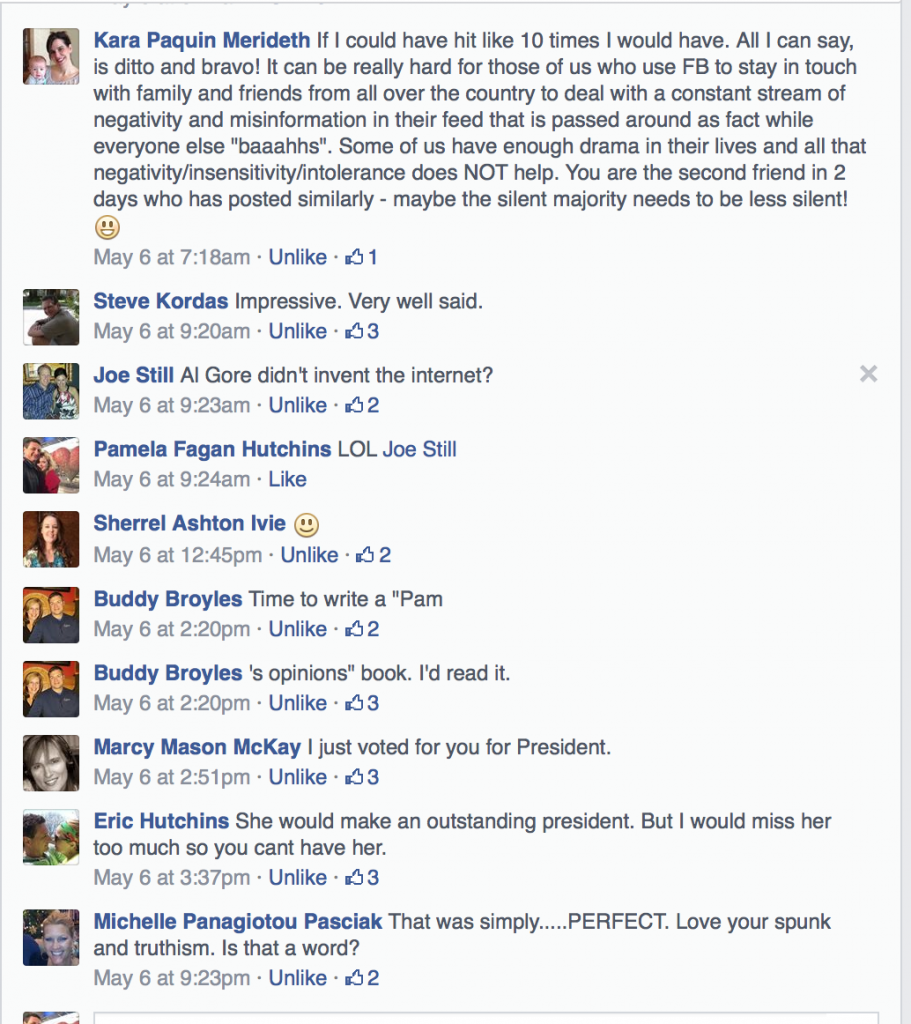 Note: This is not your normal Pamelot post. I spouted off on Facebook the other day and decided if I was going to make it public, why not “own” my words everywhere?

Recently, two of my friends faced extreme insensitivity due to race/skin color and religious beliefs. It makes me really sad, and angry. Mostly I keep my mouth shut about my views, because they are none of anyone’s business and I don’t get on the internet to debate or push my views on others. However, I am tired of feeling wishy-washy when it comes to issues that hurt people I care about.

Sooooo, one time only, I’m going to spout: here’s your invitation to cull your friend list–start with me!

I am friends with people that are Muslim, atheist, Republican, gay, Hindi, lesbian, Jewish, Democrat, straight, Christian, bisexual, Libertarian, and any other religion, political party, and sexual identity you can come up with. My friends hail from–were born in–countries ranging from Mexico, the U.S., Canada, India, Russia, the Dominican Republic, the Czech Republic, Ivory Coast and most other African countries, every nation represented in the Caribbean Islands, Venezuela, Brazil, Colombia, El Salvador, the UK, France, Germany, Italy, Israel, Sweden, Norway, Spain, Greece, Pakistan, Iran, Egypt, and countless others. I think they’re perfect like they are and don’t ever intend to try to change them. They improve my life with their amazing range and diversity. I don’t think they’re a) stupid b) immoral c) wrong d) confused e) broken or f) in need of me to change them. I don’t enjoy posts/comments that suggest these things about others.

While I’m outing myself for things others may not like, let me put it all on the table: I have voted for all parties above plus Independent in various national elections, and I have a doctorate. I don’t think I’m always right, but I don’t think you always are either, and it doesn’t usually affect whether I want to be your friend, unless you’re condescending or rude about it. I believe there are shades of gray. I am open to cordial differences of opinion, but not in my face. I don’t enjoy debating others.

I live in a blue city in a red state. My husband and I are building a sustainable house, off the grid, and are going to work toward self-sufficiency, not as a political statement or because we’re doomsdayers, but as a personal philosophy. I support a strong military and the right to bear arms (and love the sound of the pump action on my pink shotgun), as well as privacy in reproductive rights and respect/equal opportunity. I don’t think we took the right approach to solving our nation’s problems with health care yet agree that it was broken.

I am pro-environment AND pro-jobs/employers. I believe in hard work, and helping others, strategically. I own a business, with employees. I pay taxes. A lot of them. I think the FDA sells us a load of crap. I believe in INNOCENT until proven guilty, due process, and checks and balances. I don’t trust my government, but I think it’s better than any other I’ve found. I think that people who hurt children and animals are despicable. The death penalty is barely enough for some monsters.

I work with, live with, and am friends with people of all abilities. I would legalize marijuana if given the chance, although I’ve never smoked it. I don’t drink–at all–and I’m still probably more fun than most people you know. Divorce saved me. I was raised Christian, AND I believe in one God/higher power/energy source, and a lot of imperfect humans doing their best to interpret something much bigger than them, and that the Bible/Koran/(etc. etc. etc. etc. etc.) were all written within a particular historical and sociological context by humans doing their best to interpret what they believed and/or were told, and I don’t want to argue with that, because I believe in freedom of religion and my right (and yours) to exercise it in my own life and home. I don’t think Al Gore invented the internet, and I don’t think global warming is a closed issue with the idiots on one side and the enlightened on the other. I think we let our media lead us around like sheep, and wonder why more of us aren’t asking who backs which stories.

No one political party can contain me. I am your average super-moderate. I also believe a lot of other things that may piss you off. And I hate negativity most of all. I surround myself with positive people, no matter what their beliefs.

But mostly–I believe in love. Unfriend me, unfollow me, unsubscribe to me, don’t read my books, that’s OK.

Ah, that feels so much better. ~ The End