Writers You Need to Meet

This blog hop introduces writers and gives a glimpse of their work and style. I was tagged HERE for this Blog Hop by writer Andrea Barbosa – here’s her introduction, and following Andrea I’ll introduce you to two other new writers you need to know, after I answer a few questions.

Andrea Barbosa was born in Rio de Janeiro, Brazil, holds a Bachelor’s degree in Tourism and took creative writing courses at Texas Tech University. She loves to travel, read and write. She maintains an Indie review blog and is a contributor on Yahoo Contributor Network and Yahoo! Voices websites. Her work has been influenced by contemporary authors Paulo Coelho, Fernando Sabino and Joyce Carol Oates, Erica Jong, among others.

Massive Black Hole is her first novel, a literary general fiction/drama. She also loves poetry and has recently published a poetry collection, Holes in Space, featuring beautiful photography from her friends. You can follow her blog http://magictrendsreview.blogspot.com/ and also find her on Goodreads and Facebook. Follow her on twitter at @AndyB0810. 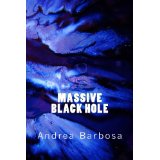 More about Massive Black Hole: At 18, Cibele, a student from Rio de Janeiro, dreams of a life in New York and moves to the big Apple as an au pair girl, where she meets the precocious Amy, a young scholar whose goal in life is to study sciences and astrophysics. While visiting the MET, Cibele is impressed by a particular work of art depicting hell, in the style of Hieronymus Bosch. When Amy introduces her to astronomy, she is consumed by fear of black holes. Lost and confused with what to do with her life, she meets ambitious Agatha from Texas, who came to New York to succeed as a fashion model. While trying to survive and achieve their goals, the 3 young women question the meaning of life, death and the existence of hell, and their friendship ultimately turns into a maze of betrayal, jealousy and selfishness.

Massive Black Hole is a surrealist literary fiction novel that explores moral issues concerning suicide, abortion, friendship, betrayal, life’s purpose and the existence of hell through the lives of the protagonists.

>>>Because hell is real! Embark on this spiraling journey through Rio de Janeiro, Texas and New York discovering the ambitions of 3 young women trying to find the meaning of life. Through a series of events that prompt them to play with each other’s destiny, they will face their ultimate challenge: is hell real?

Now, here are my answers to the blog hop questions:

What am I working on?
I’m developing my next trilogy in what I am now thinking of as the Katie & Friends Series, since Katie & Annalise are spawning novels featuring FOK (friends of Katie). I’m open to other suggestions for a series name, y’all. And I’m gearing up to promote my novel, an FOK story called Going for Kona.

How does my work differ from others in the genre?
I’m not classifiable in any one genre, as I write truly cross-genre books. They’re fast, they’re funny, they’re emotional, they’re thrilling and suspenseful, they’re realistically magical, and they pack a good mystery.

Why do I write what I write?
I am inspired by the people, places and events in my life to ask “what if?” and take it from there. I write what comes out of me, because that’s just what I do. 😉 I wouldn’t know how to do anything else.

How does my writing process work?

First I talk through story ideas with my husband. We scrap most of our ideas. When we snag a good one, I outline it and write a synopsis. We talk about it some more. I revise. Then I block out several weeks, turn off the world outside, and I power write. I take a break for a few weeks (from that book), then come back to see what I’ve got. If necessary, I put it away longer and plan a major rewrite. But if it’s pretty good, I launch into a comprehensive revision, then get that sucker out to my editor for a consult. After I incorporate her suggestions, she copyedits it, then I send it around for final feedback to my critique group and beta readers, and then call it George.

Here’s what Rebecca has to tell us about herself:

I write children’s books as Rebecca Nolen and adult books as R.L. Nolen.

The Dry is a children’s book set between the freedom of slaves and the implementation of child labor laws. Children were virtual slaves in the coal mines. When a young boy goes in search of his lost father he ends up underground where giant insects rule.

Deadly Thyme is an adult psychological suspense set in a sleepy seaside village of North Cornwall where a girl has disappeared. The villagers are keeping secrets. One of them is deadly.

I write, illustrate, and care for loved ones in Houston, TX. I taught children, cared for an assortment of pets, and killed poisonous snakes in the wilds of Sugar Land for twenty-two years before moving into the big city seeking “hipster” status. As that goal remains sadly out of reach I continue to practice the fine art of balance at the local YMCA, and I walk the dog. At the moment I am in the room at the top of the stairs dreaming of England and cream-filled donuts. 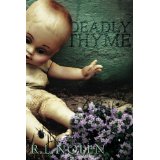 More about Rebecca’s Deadly Thyme: When Ruth Butler escaped Texas for a sleepy seaside village in the south of England, it was to rescue her infant daughter from the perverted demon she’d married. But after ten peaceful years in Perrins Point, her daughter Annie disappears.

Not far away, a madman has been trying in vain to turn back time. When Ruth turns out to be a dead ringer for his mother, the voices in his head haunt him day and night. The only way to stop his mother’s nagging is to kill her all over again . . .

Ruth must rely on her instincts and the ally she finds in an undercover detective who’s in town on unrelated business, but neither can search for Annie’s kidnapper openly. Ruth could be deported for living under an alias and Detective Inspector Jon Graham would blow his cover. Nevertheless, the trail leads from a faceless body in Annie’s clothes to a smugglers’ cave, where the killer drains his victims’ blood an ounce at a time. But he’s got a special purpose for little Annie. He is patient. He will wait—until her mother comes to save her.

Ken Oder was born in Virginia in the coastal tidewater area near the York and James Rivers, where military installations during World Wars I and II fueled the growth of urban centers like Norfolk, Hampton, and Newport News. His father worked for the Navy Mine Depot in Yorktown and later as a Hudson dealer until he heard his calling to preach. When he became the minister at Mount Moriah Methodist Church in 1960, the family moved to White Hall, Virginia, a farm town of about fifty people at the foot of the Blue Ridge Mountains. The mountains and the rural culture were a jarring contrast to the busy coastal plains, but once the shock wore off, Ken came to love it there. The mountains and hollows are spectacularly beautiful. The people are thoughtful, friendly, and quietly courageous. White Hall became his home, and his affection and respect for the area and its people have never left him.

Ken and his wife moved to Los Angeles in 1975, where he practiced law and served as an executive until he retired. They still live near their children and grandchildren in California, but a piece of his heart never left White Hall, and that place and time come out in his stories. 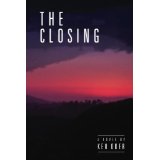 Ken’s debut novel, The Closing: When two men meet in the Virginia state penitentiary in a maximum security visitation room on May 5, 1968, they have only one thing in common: they both want their lives back.

On one side of a glass divider sits Kenneth Deatherage, who was sentenced to death for the brutal rape and murder of a young woman. The jury agreed with the prosecutor’s closing argument: that all evidence points to Deatherage as the killer. But Deatherage says the evidence was fabricated. He claims that the judge and his own lawyer rigged the trial against him.

On the other side of the divider sits Nate Abbitt, who was a successful prosecutor until he tried to drink his way through a midlife crisis. When he finally sobered up, he had lost his career, his marriage of thirty years, and his self-respect. He turned to criminal defense because it was the only work he could get.

When the court appoints Nate to represent Deatherage on appeal, Nate doesn’t believe there’s a grand conspiracy to send Deatherage to the electric chair. But when his investigation uncovers hints of corruption in the county justice system, he finds himself accused of murder by the same forces that convicted his client. To save himself, Nate risks his life and the lives of others, and in the process, discovers that he and Deatherage have much more in common than he wants to admit.