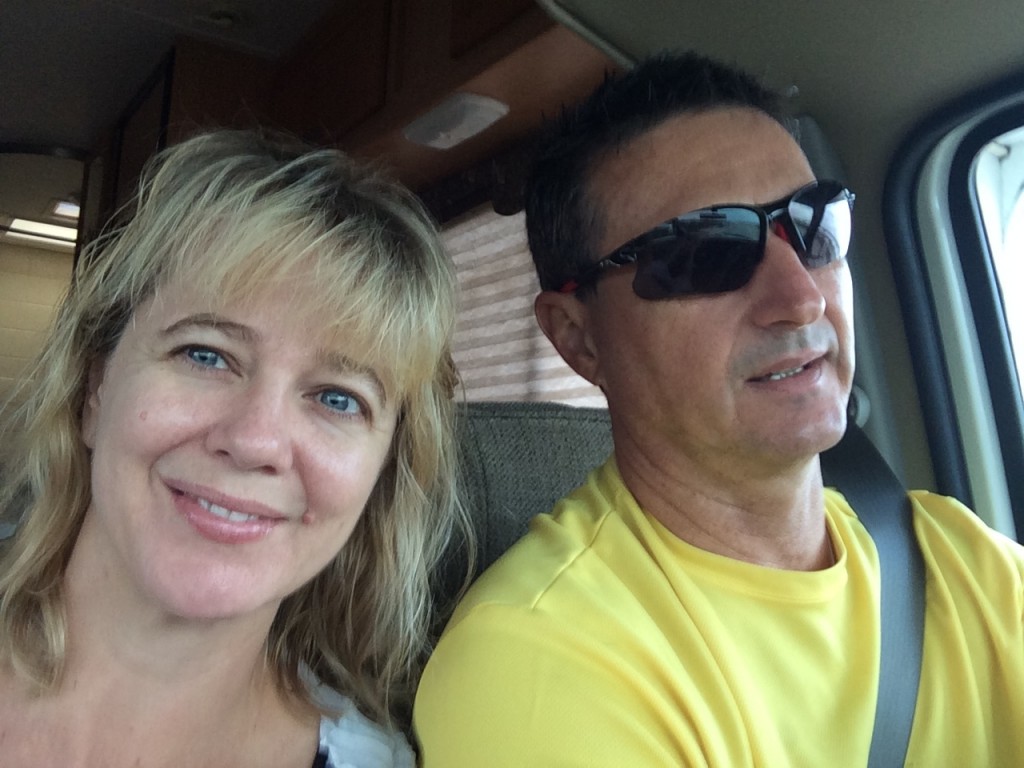 The Bookmobile is bursting at the seams, y’all, but it’s all book stuff. Or mostly, anyway. I packed much lighter for this book tour, and Eric only got one little cabinet for his stuff. Poor Eric. He also got handyman duty as we pulled out of the driveway, because our bathroom door latch was broken. Two bungee cords later, he had proven that the most effective engineering solution is not always the most elegant one.

We scheduled the Grand Canyon as our first stop, and that meant a 21-hour drive, the longest leg of our 30-day journey. We’re not ones to waste any of our potential down time, so we decided to share driving duties and push straight through in one stretch. I have a small slew (is that a contradiction in terms?) in writing contest entries to judge, so Eric took the first shift. It was a super windy day on I-10 in far west Texas, though, and who can read writing contest pages in a swaying RV, I ask you? (Not me)

After I gave up, we obsessed over how Saving Grace was doing on its Bookbub day (amazing, which I’ll write more about later), and chatted about promotion strategy.

“Are you ready for me to drive?” I asked Eric at our next gas stop in Pecos. Hot, hot Pecos.

“Why don’t you drive after our next fill? I can sleep for a shift, then I’ll take the last leg.”

Thirteen hours to go. So we listened to a John Sandford audiobook and tried to hold hands over the excessively wide span between the driver and passenger sides. We fussed over Bookbub. We missed Petey. I napped. I woke up.

Eric didn’t waste time with pleasantries. “Is there any chance there’s a town before we get the I-40 Junction?”

That earned me a cut of his eyes in my direction, but no answer.

“OK,” I said. I pulled up the iPhone mapping and enlarged it for a closer look. “I don’t see anything.”

“Because we’re too out of gas for air conditioner.”

I pulled my hand back. Well, suffice it to say that, even though this story would be funnier if we’d run out of gas, an oasis appeared before our eyes: Vaughn, New Mexico, population 407, and home of TWO gas stations. We picked the one that turned out to have the higher percentage of lurkers with pockets full of Roofies. We scurried out.

Eight hours to go. I checked my Bookbub-related activity. I slept, until the Bookmobile slowed down for Gallup, New Mexico. “Do we need gas?”

“Well, it’s really, really windy. How about you just keep me awake instead?”

This man is a keeper. Five hours to go. One last gas stop outside Flagstaff. Saving Grace at 60,000 downloads and counting. And then we turned north toward the Grand Canyon.

I pointed at a sign on the side of the road. “That sign suggests we’re going to encounter a lot of large animals.” I strained my eyes, searching for signs of them.

Thirty seconds later. “Whoa, large elk. Do you see him?”

Eric shook his head, more to clear it than anything else. He swerved.

“Oh my God!” An enormous elk on the left came into view.

We drove on, with elk, deer, and even enormous rabbits all over the road, for an hour. It was a nail biter, and we were delirious with tired. Eric shifted in his seat and suddenly, everything went black.

“Shit!” Eric yelled. He flailed around until he found the headlights, which he had accidentally turned off with his knee. Click. The lights came back on.

“Shit!” I yelled, as we bore down on the biggest elk yet.

Eric cut to the right. The elk didn’t budge. We missed it, and stayed on the road.

“That was close,” I said, and patted Eric.

The lights of Tusayan appeared in the distance as the first light of dawn filtered into the sky.

Phew. We had made it. Day one of the Redneck Writer Road Trip, in the books.