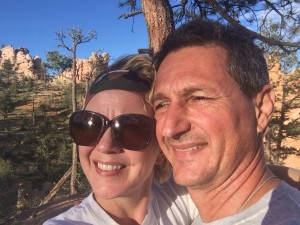 Early-ish on Monday, we headed north, via an eastern route on the south side of the Grand Canyon. But not until we had to pay to use the RV park’s dump station, only to find that they didn’t even have a hose for clean up, just a hand pump water system. You try to clean a writhing poo hose while pumping water in the other hand that is coming out erratically in spurts of disturbingly high pressure. Anyway, we survived it by filling water bottles and using them, slowly, one at a time, to do the dirty work.

Unpleasantries concluded, we hit the road. Despite a mountain lion warning sign getting our hopes up, all we saw was deer, elk, and (and this was enough) amazing views of the Canyon. A few hours later we caught our first glimpses of Lake Powell and crossed into Utah.

About half an hour into Utah we were trudging along up a steep road. A car passed us, and pointed to the back of the Bookmobile. Eric waved and they sped on. He glanced in the side view mirror.

I glanced in my side view mirror. The poo hose had slid out of its cubbyhole in the bumper and was trailing behind us, waving in the wind like a long gray tail on a big white dog. Every few waves it would hit the ground with its (brand new) coupling end.

The best part? All of this tail action was happening right below a giant “PAMELAHUTCHINS.COM” emblazoned on the back of the Bookmobile.

About that time another car slowed beside us and pointed at our back end. Eric saluted them. There was nowhere to pull over. He kept the pedal down and tried to avoid eye contact with passing cars.

But still none came.

“There’s no one behind us. I’m going to just stop with the flashers on.”

But he was already out the door. Memories of West Virginia and the 60-Cities-in-60-Days book tour flashed through my head. Pulled over to the side of the interstate while Eric sprinted a quarter mile back down the road to pick up the 30-pound metal bi-fold sign that had fallen out of “the belly of the beast” when “one” of us forgot to latch it.

This was kind of worse.

A breathless Eric returned and slammed his door. He threw the Bookmobile into drive and goosed it to get it going on the incline.

“You made it,” I said, unnecessarilly.

He grinned at me. “Good thing that we took a few extra minutes to clean it this morning, since half of Utah got to see its business end.”

The rest of the trip was uneventful. Just gorgeous. The drive on the Scenic Route 12 Bypass dazzled us, truly. We had time for one short hike in the red cliffs near Tropic, Utah and some hot tubbing with RVers from Florida to California, then we tucked in for the night.

Book tour event number two was scheduled in Virgin, Utah the next day, but only after a five a.m. hike in Bryce Canyon National Park.