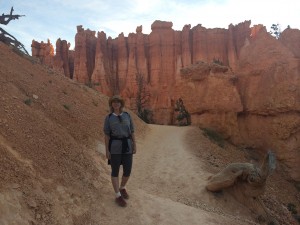 We made it into Bryce Canyon National Park in time to be down the trail to watch the sunrise hit the painted cliffs, from below. The panorama was spectacular. 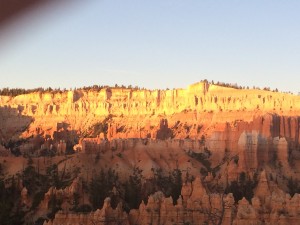 (I really need to quit putting my fingers in my pictures!)

We hiked a total of six miles, but we ascended and descended for a total of 4000 feet up and 4000 feet down. Both of us felt it. One more than another. When we were at the halfway point, we stopped for a backpack breakfast. Eric surprised me kneeling in front of me and renewing his vows to me. He did really well. I had to catch up quick, so it probably wasn’t nearly as poetic as his, but it was heartfelt, and in the moment. Isn’t he the sweetest husband ever? And good looking. 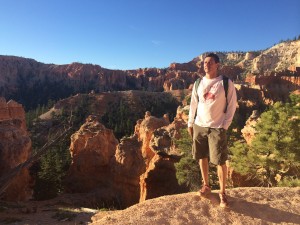 We got back to the rim and to the Bookmobile and saw this: 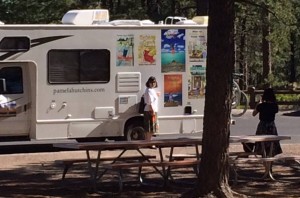 Eric took a copy of Saving Grace to the nice Chinese family–their 20-year old daughter spoke English, and the mom could read it.

Two minutes later we got a knock on the door of the Bookmobile. The daughter brought us this: 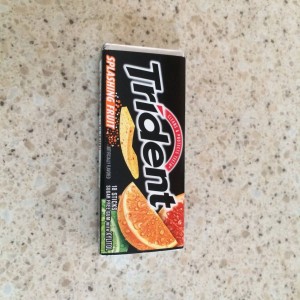 And one minute after that we saw this: 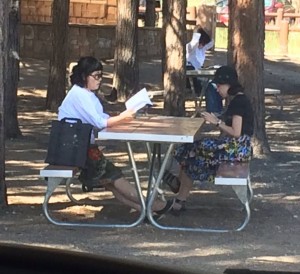 Onward we drove to Virgin. We made it in time to shower before the USA v. Belgium game (ugh, painful, but man how awesome is Tim Howard???). The bathhouses had individual shower suites. Because we were in a hurry and only one was open, Eric and I snuck in together.

“Don’t worry, I locked the door,” he said, as I went to flip the dead bolt.

I proceeded to shower. Five minutes later, the door started making tremendous noises. Someone was trying to get in!

“Occupied,” I shouted, just in time, as the door creaked open.

“Well, I thought I had locked it,” Eric said.

Ay carumba, we’re probably going to get kicked out of Utah.

After the game, we had a book chat event in the resort’s Social Room. We met some wonderful people, who left with stacks of books. Eric saw a woman outside reading one of hers the next morning.