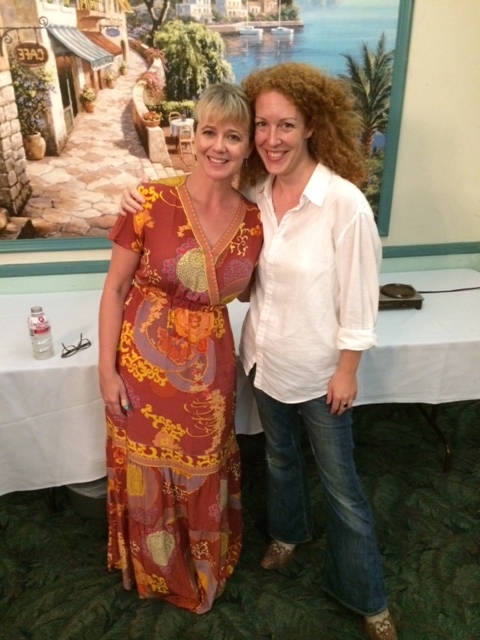 California didn’t disappoint. Don’t misunderstand me—we don’t love it like we do Arizona, Utah, and the other less-populated states. Too many dang people. Hard to even appreciate the beauty. But Big Bear Lake was new to us, and that is always fun. The drive out into coastal Southern California was impressive (if smoggy below us), and I’m continually surprised by how rugged and arid the land is. It’s like high desert, low desert, and coastal desert. A whole lot of desert.

We arrived in Orange County in enough time to see our daughter Liz’s new place. Then we scurried over to the Elks Lodge to set up for book club. KoP Shannon Kennedy had arranged it, and the location was so perfect. Easy to get to, dinner was served, and we had some random non-book club elks join us. We also had KoPs Rebecca Weiss and Meghan Pinson, who is also my wunderbar editor.

We had a lively conversation that covered everything from my writing career and choices to publishing and writing in general. Everyone was super nice to me, and Eric noted in front of the group that I’m getting a big head. Well, if I am, it’s his fault. His favorite pasttime is reading me reviews on Amazon. With the 125,000 downloads of Saving Grace in the last week, we’ve had 70 new reviews. So he’s reading me a lot of them! (I’m posting on the incredible step change in my career, soon, because big things are afoot!)

One lovely thing about Southern California for us is family. We chatted after book club with Eric’s cousin Dann, and we spent a perfect July 4th with Liz and her boyfriend Jake, at Thousand Steps in Laguna Beach (next to hordes of spoiled drunken teenagers wearing little or nothing), and at the Anaheim Angels v. Houston Astros baseball game. We cheered for the Astros, but the hometown hero Mike Troutt hit a homerun in the last inning to put the game away for the Angels. Afterwards, there were fireworks set to music, and then we got on the road to Adelanto, to overnight in an RV park conveniently located in front of the Federal prison. We think the park caters to spouses of inmates. It rivaled Clark Kent’s meth lab from last summer.

Like Big Bear’s RV park the night before, we called ahead for late arrival, and were assured that a packet with our site information would be waiting taped to the office door, yet it wasn’t there in either case. We’ve learned to park where we can. The whole ask forgiveness later thing. I’m not even sure if either place charged us. Oh well. Nevermind, we were only there five hours, since we left for Reno at four a.m. I’m typing this post on our Reno drive and trying to keep my eyes open!!