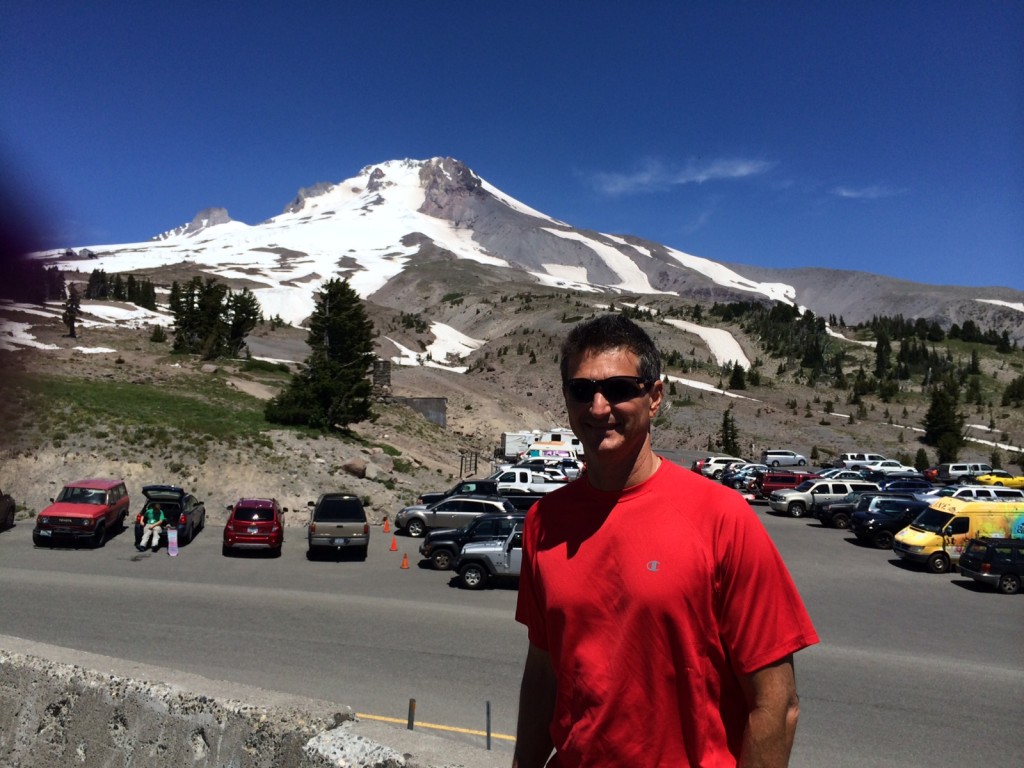 We decided to take the long way from Sisters to Mount Hood, via Maupin, an adorable town in rugged eastern Oregon, on the Deschuites River. We made a library visit there and stopped for the world’s best coffees at Maupin Market.

Our first stop on Mount Hood was the Timberline Lodge. It’s an amazing place to visit–on the Pacific Crest Trail, and accessible to the chair lifts for the highest elevation skiing on Mount Hood–built in the 1930’s when FDR was trying to pull the US through the Great Depression. This is a common theme in all the parks we are visiting, and I have enormous gratitude for how he preserved our great wilderness areas, and at the same time helped our populace. The structure is built of massive hunks of stone and enormous sections of rough-hewn timber. It has charm oozing out of every square inch. It is also the hotel used for exterior shots of the hotel in the movie The Shining, based on a Steven King novel, so most of us have seen this lodge before without even knowing it.

“We” opted for a nap instead of hiking in the early afternoon, because it is so rare that I fall asleep during the day (practically even at night) and Eric refused to wake me up. He parked the RV without disturbing me, and got out to marvel at the fairies-and-elves forest around us, from the tips of the towering trees down to the ferns and the moss below. Eric later told me he wanted to put Christmas lights at the top of the tallest tree.

When I woke up, we just had time to squeeze in a short hike down to the Salmon River. Eric shucked his hiking boots and waded out into the middle. It looked so inviting that I tried to join him. I made it three steps before I fell and ended up drenched. It was a good look for the pharmacy, where we went to immediately after. (And where we met the most delightful couple–a retired pharmacist who had been talked into returning to work for the benefit of the community, and his wife, who would accompany him on his RV journeys to Indian communities to provide temporary health care services.)

We had the night off, so after a quick shower and doing our laundry (yay!), Eric built us a fire.

“I’m warning you, I’m not doing my show hair tonight,” I said, as I came out of the RV with a wild rat’s nest atop my head. For those of you who don’t live in Texas, I am referring to the elaborate hair dos of the animals and the girls at FFA shows. I saw my cute husband by the fire. “You look great!”

“Thanks, babe. And you don’t need show hair.”

I took a closer look at my cute husband. Something seemed “off.” His shorts, maybe? Well, not OFF off, but not RIGHT. They cut in around his thighs in a way I hadn’t seen before. Not like his normal, loose running shorts. “Um, Eric, are your shorts on inside out?”

He looked down. “I wondered why they were so uncomfortable.”

I grabbed his phone, ready to take a picture, even if it was dark. Thereafter followed a scuffle, no picture, and one completely black-screened video. Oh well. Trust me, they looked funny.

Hey, if you’re into this kind of thing, here’s the video of me onstage at Listen to Your Mother, Southeast Texas edition, 2014:

That’s all I’ve got,