Redneck Writer Road Report #11: A Day OFF at Mount Ranier

We started our WHOLE DAY OFF at Mount Ranier clustered at picnic tables outside the office with half the guests at Gateway Inn and RV Park, desperate for a fix of wifi. Gotta love the password: Sherpa117. Not only appropriate for the base of operations of Ranier mountain climbing (Ashford, WA), but also because that’s what Eric calls himself at my book events. Or maybe what I call him. One or the other.

The hotel was literally 100 yards from this: 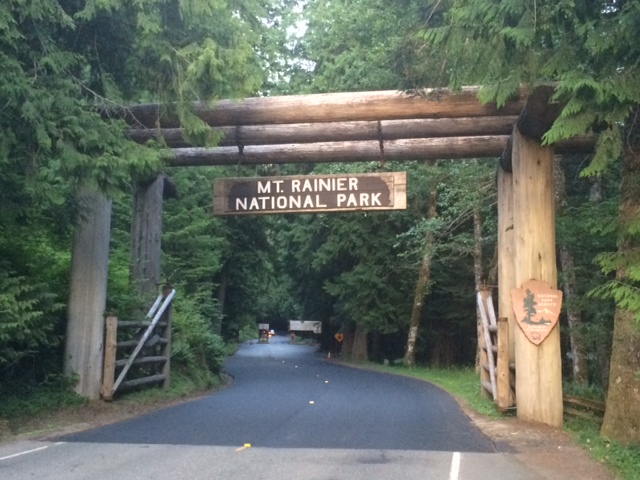 How freaking cool is that?

For those of you outside the know, Mount Ranier is the tallest peak in the lower 48 states of the US of A, and it is a volcanic mountain whose last eruption was in 1894. You can see Mount St. Helen’s cratered top from some places on Ranier’s slopes, and it last erupted in 1980.

Familial trivia: my father and brother climbed Mount Ranier in 1996. While I am fairly crunchy and into painful activities, I am scared of heights, and I stayed at the base with my mother, and my baby son Clark Kent.

Mount Ranier, known to native Americans as both Tahoma and Tacoma, has some seriously good juju. You can feel it as soon as you pass through the big southeast gate. It’s enchanting. The lower slopes are home to ferns, Western Hemlocks, Douglas Firs, and Red Cedars, and the upper slopes are steep escarpments of rock and cascading water. Blue-iced glaciers tumble down the peak, frozen in time. If you get the chance, it’s a must-see, up there with the Grand Canyon and Bryce Canyon to us.

We started our day hiking from Paradise (site of the famous lodge of the same name) up Skyline Loop to Panorama Point. The Bookmobile posed for a shot with the Ranier peak: 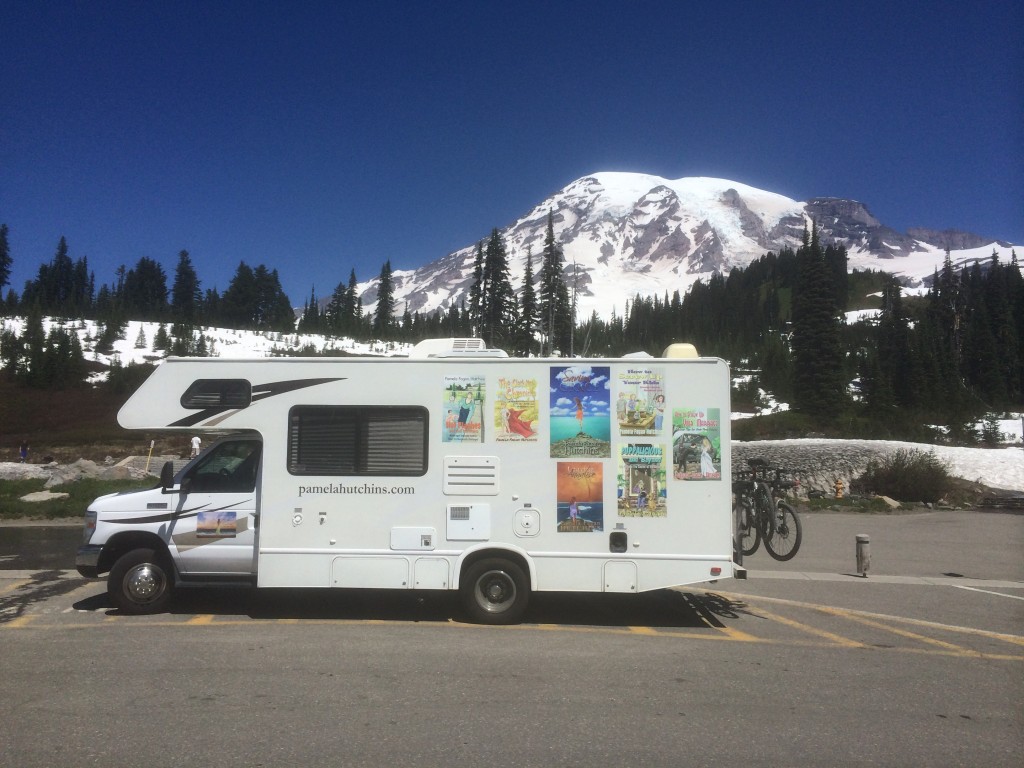 Yes, this is the little RV that could. We’ve logged 4000 miles so far, and a whole, whole lot of them steeply up and down hill.

Eric was lugging eight liters of water in case we decided to keep going to Muir Camp, and I had about half a tube of sunscreen on me, including up my nose and inside my ears, at the direction of the Ranger who took one look at my pale skin and started in on a five-minute sunscreen lecture. See picture of what I forgot to lube up: 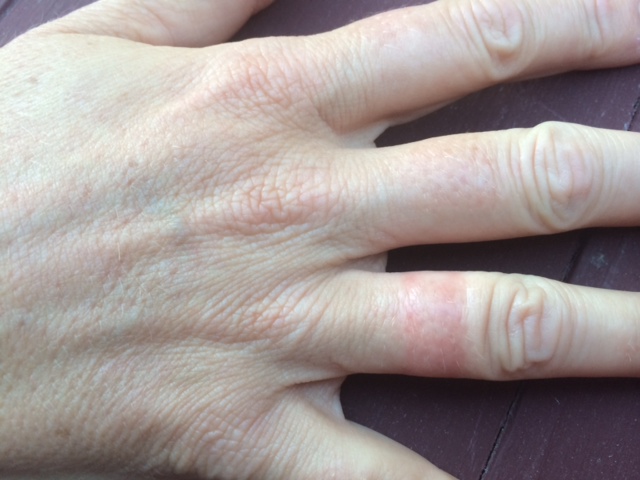 Unfortunately, the snow hasn’t melted. We got halfway up the western side of the loop and turned back because the trail was too icy and steep. We restarted on the eastern side. We made it a little further, with the same end. If we had walking poles we would have made it. But let’s be honest here: if Eric wouldn’t have had me, he would have made it. Did I mention I’m a little skeered of heights? So skeered I didn’t even take a picture at our turnaround point, and that would have been something. It was a very tall, steep slope and we were hiking across it on an icy ledge. Right before us, two women went down on their behinds, screaming the whole way. They were fine, in fact, they did it on purpose because they were afraid of walking back down. Better a controlled-slide than an uncontrolled fall, they theorized. However, they wore shorts, and I think their nether-regions probably iced over on the way down. 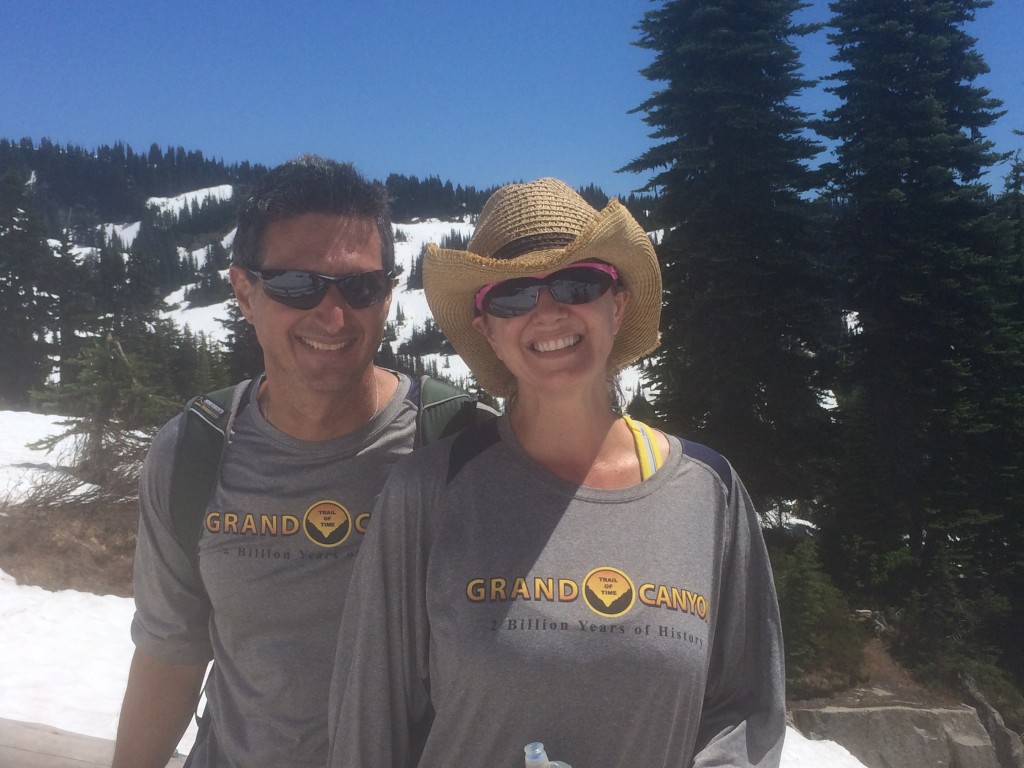 After I ruined what would have been fantastic views, we opted for a hike to Snow Lake on a trail that, despite its name, was nearly snowless. All the trails are steep on Ranier, but they’re worth it: 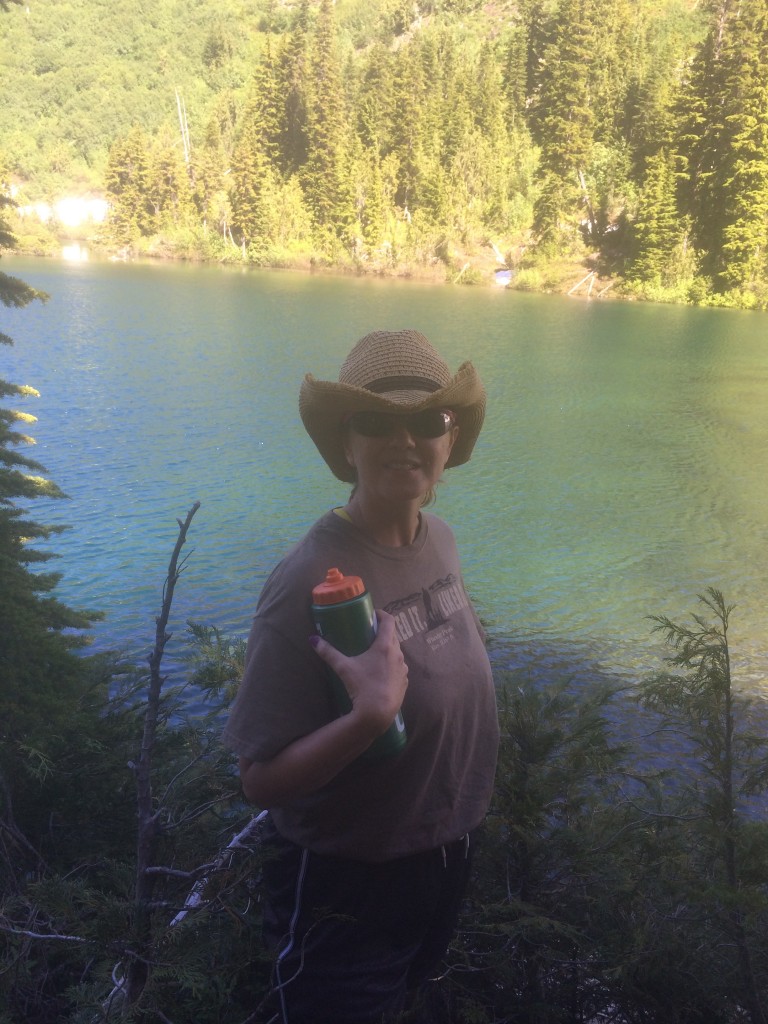 I want granite in those colors in my new house in Nowheresville. The picture doesn’t do them justice.

Finally, we squeezed in one last, short hike: Grove of the Patriarchs. Situated mid-river, this island is home to 1000-year old Red Cedars and Douglas Firs. Here I am with a Red Cedar: 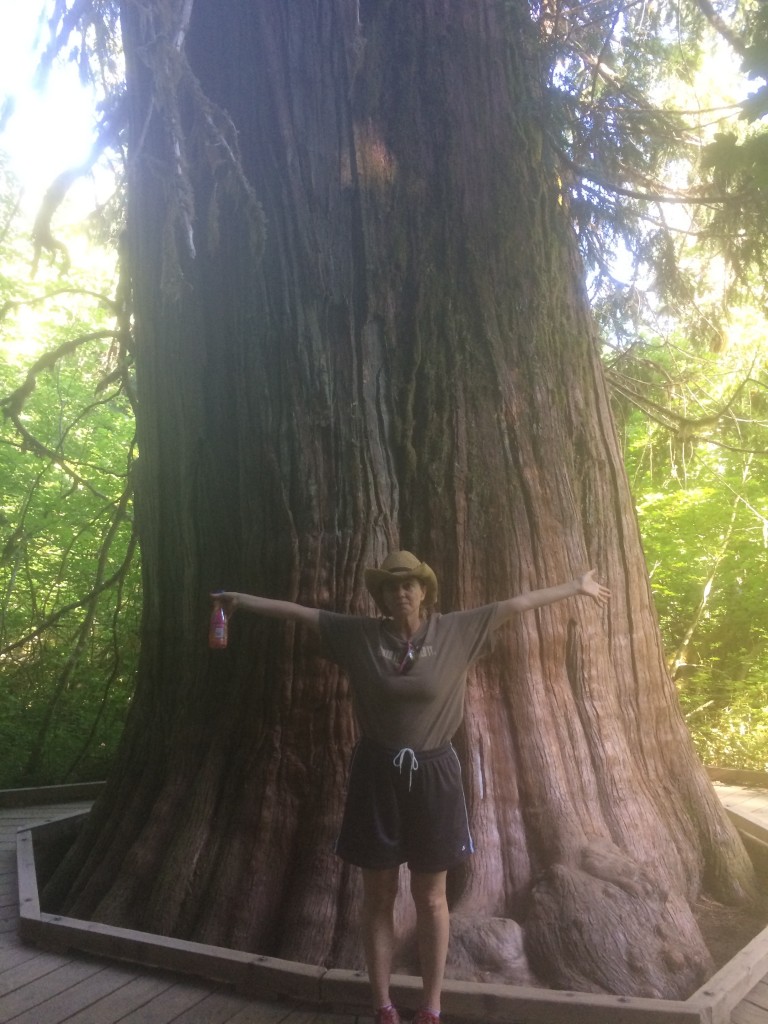 Eric wants me to mention that my fear of heights gets a little ugly driving along roads with unprotected 2000-foot drops off my side. 😀 I think he exaggerates. He also makes fun of my bug phobia, but I swear insects make a beeline for me (no pun intended). Just to prove it, check out what’s on my forehead here: 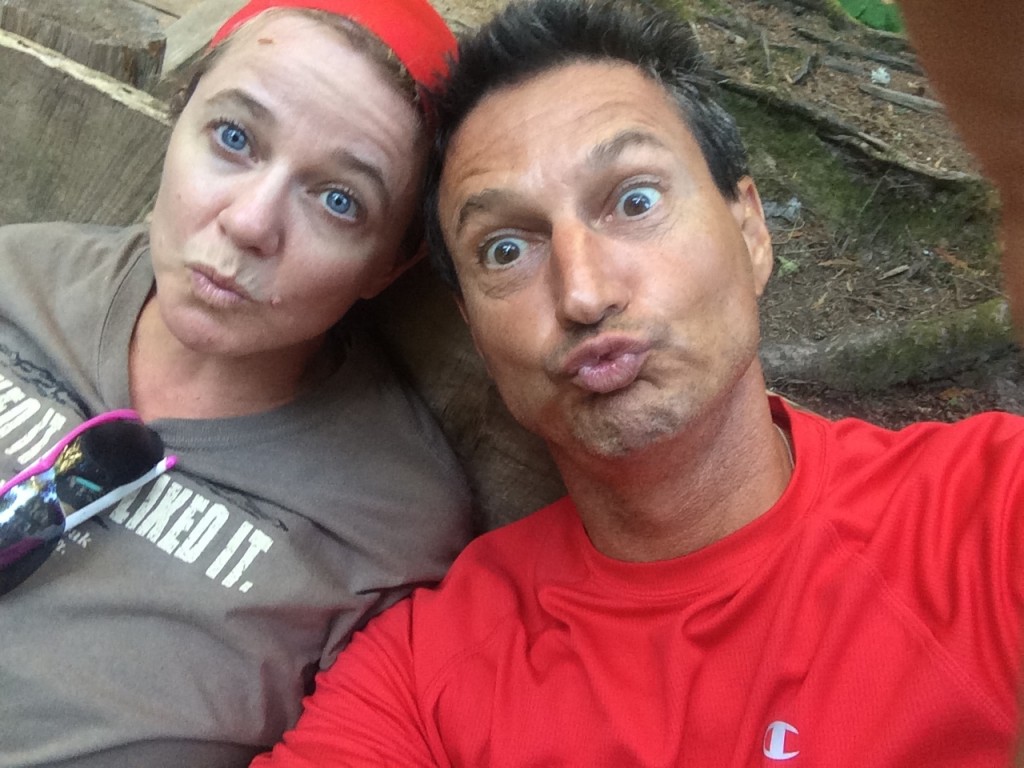 That’s blood from a mosquito I had just swatted before Eric called out “selfie” and snapped a picture of me in mid-bite-trauma.

Since no non-working day is complete without a little book distribution, Eric had me sign a copy of Saving Grace to leave in the wifi “lounge.” We do these drops sometimes, asking people to email me and let me know when and where the copy ends up in their hands. It was snapped up immediately by a group of women vacationing across B.C. and WA. One of them even had on a St. Croix hook bracelet, just like Eric’s.