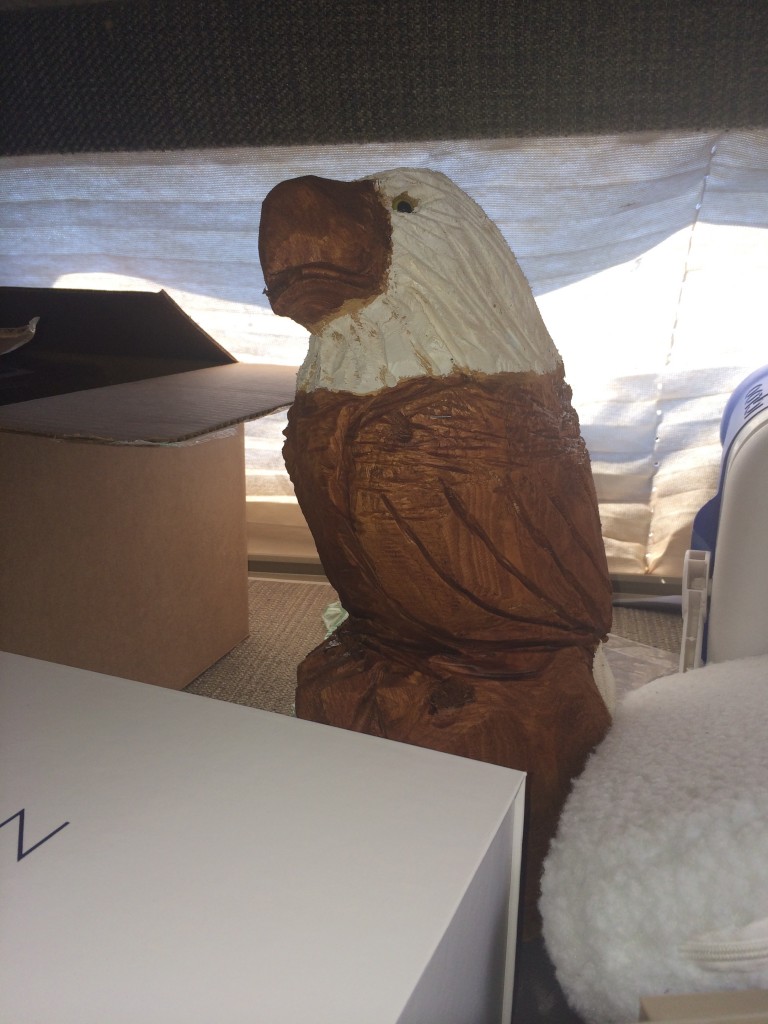 Look what Eric got as we left Mount Ranier. ^^ No, it’s not a fuzzy vent insulator for the RV sky vents. It’s a very sloppily rendered chainsaw eagle, with a few slapadashes of paint. Yup, that’s our trip souvenir. He bought it from a former lumberjack who now is minus both his legs. No, I didn’t make that up. But I did hide the eagle in the “upstairs” cargo hold. Let’s see how long it takes Eric to find it and put it somewhere showy.

Our drive through Seattle and up to Bellingham was a stressful one. I had to somehow get our publishing company’s ebooks uploaded to Overdrive with spotty tethered internet via an FTP transfer site on my still-new-to-me Macbook Pro. The drive took three hours. I never got them uploaded.

I also needed to book some promotions for Saving Grace. One might think that when it has generated $10,000 in sales of my other books in the last two weeks that we would stand down for awhile. But the best time to generate sales is when your rankings are up, and I actually waited a tad too long to get this next one started. I got Tweet Your Books set for this weekend, and Kindle Nation Daily for the end of August. Gotta figure out a few more in the meantime, but at least I’m good for now. I batted down a flurry of other stuff, but mostly I mourned my Overdrive failure.

All was not lost though–we did three library stops: in Marysville, Mount Vernon, and Burlington. Each library looked well-funded and -staffed, and was full of happy summer activities. It was quite impressive.

We arrived to our Bellingham RV Park with two hours slack in our schedule. And their internet was blisteringly fast. So I got BACK on my laptop to try Overdrive. No dice. In desperation, I borrowed Eric’s non-Apple machine and tried it. It seemed to get further. Truly, I was now a mess. I hate wasting time, I despise slowness, and I abhor failing. So I did the unthinkable. I googled for help. There were 10 vastly different sets of instructions on the first page alone. I tried one from an MS Dos Prompt and got 90% of the way there. I switched to one where I created a network connection on my computer for the FTP site.

And, after four and one half wasted hours, it went through. The good news? The next upload will be a cinch. The bad news? I chewed off two fingernails. Ay carumba.

Eric and I turned our attention to our next event. This RV park had gone all out. There were posters everywhere. Keep in mind, it’s not about how many people buy books at our events or even come, although both of those are nice. It’s about how many times people see the Saving Grace cover, and ultimately are driven to download it (free), and thus are led like lemmings to Leaving Annalise and Finding Harmony. So this park did us up big. In fact, one of their employees, the wunderbar Diane/a made crock pot pulled pork (DELISH) and had fruits, veggies, and gluten free crackers and buns!!!

They pulled a nice little crowd of people who we enjoyed greatly: a writer of an Alaskan plane crash survival novel (which his daughter deemed “sounds like a 60-year old man,” so he’s let it sit for a few years until he was ready to try again which he now is), a porcelain and portrait painter who describes her creative process in a way that made it clear I’d met a soul sister (90% prep, 10% delivery), a blended family couple on their way north via Bellingham where her son was signing in an opera, several former full-time RVers and one long-time Alaskan. Not only that, but one park summer resident who was out of town this weekend left $$ for all of my books, plus we gave her an additional full set for a benefit in honor of her friend Dave who had been mauled by a bear, and was strong enough to live to tell about it.

It should come as no surprise at this point to learn that ERIC FORGOT TO TAKE ANY PICTURES!!! But we love him anyway, don’t we? He works so hard to entertain people and make everything go perfectly for me. Pictures are a break in the action, and he’s all about the action. 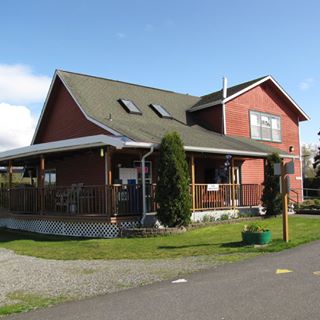 ^^ Picture of Bellingham RV Park from their Facebook page, because ERIC DIDN’T TAKE ANY.

And now our windows are open for another gorgeous evening in the Pacific Northwest.