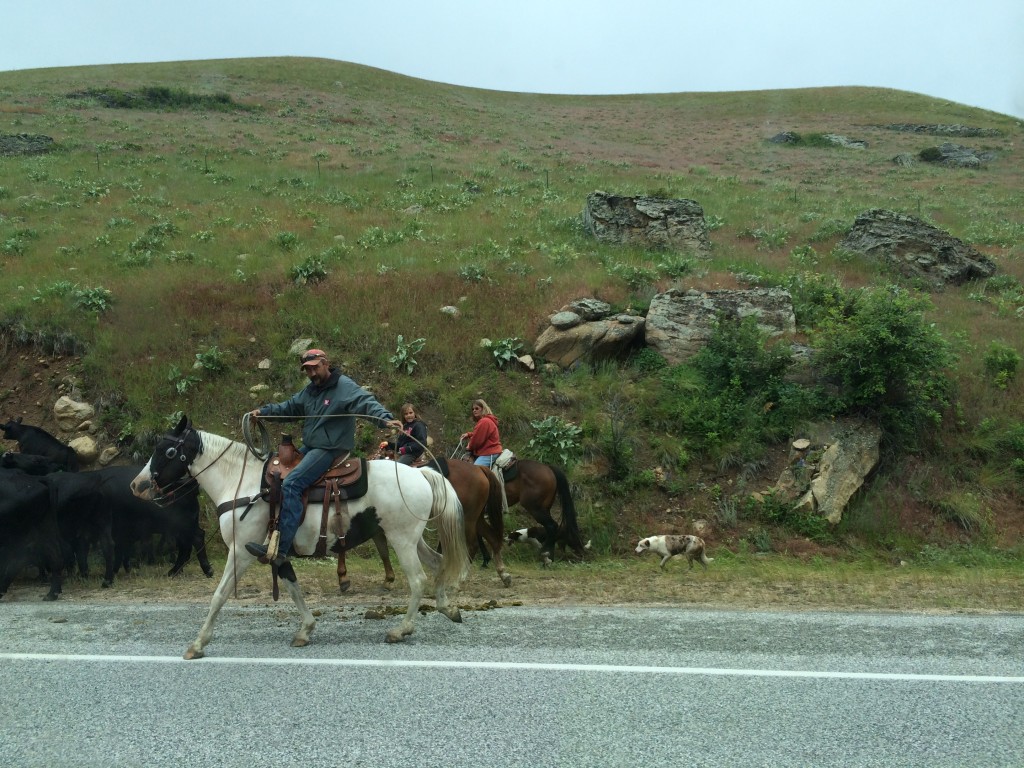 The first thing we encountered in the mountains was a bona fide cattle drive. All dogs and hands were on deck to keep the cattle off the road (as much as possible) and out of the canyon. This was in the Bighorn Mountains. 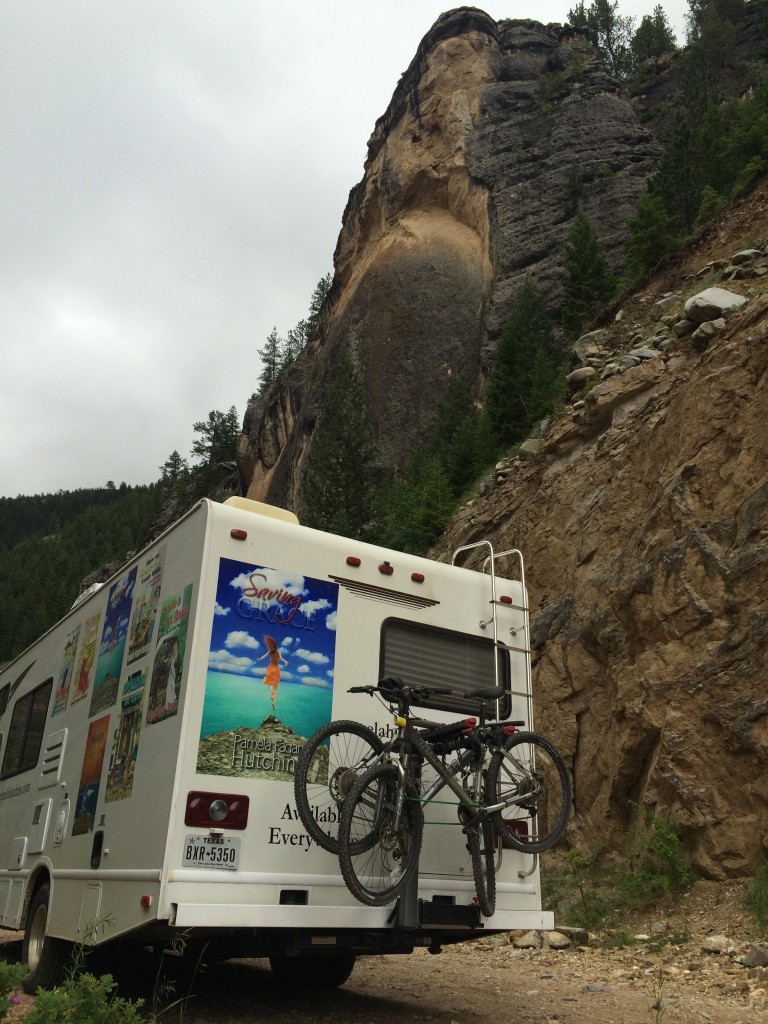 We drove the Bookmobile down through Crazy Woman Canyon. There were a few spots where the canyon walls were so close we had to pull in the side mirrors. 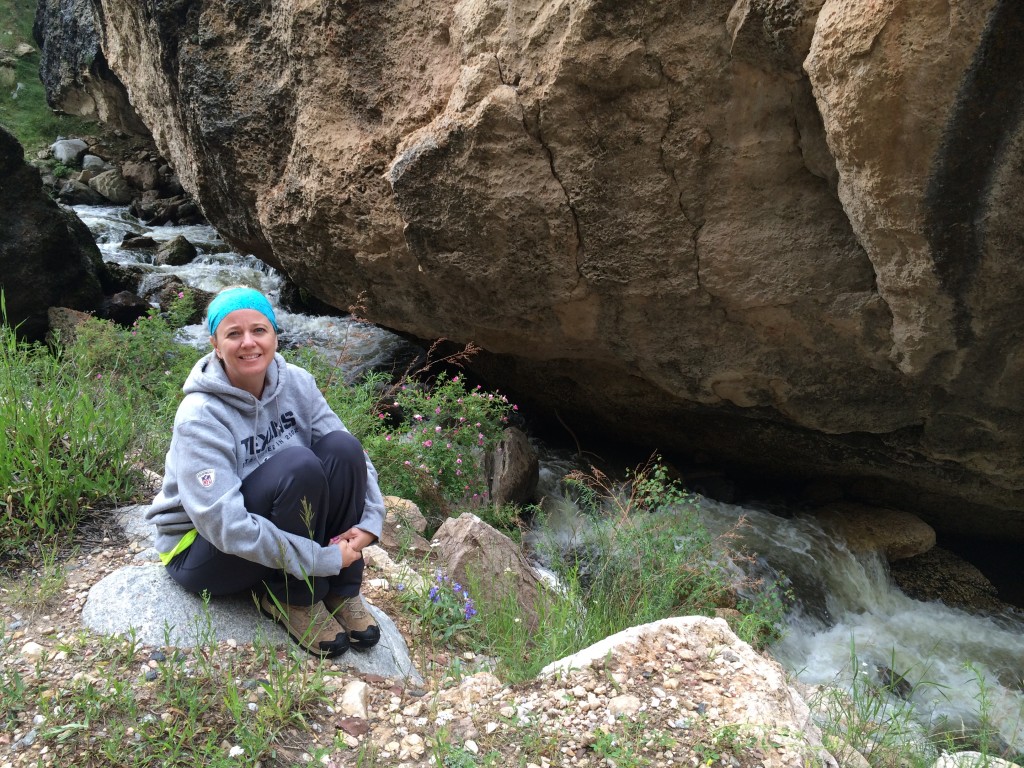 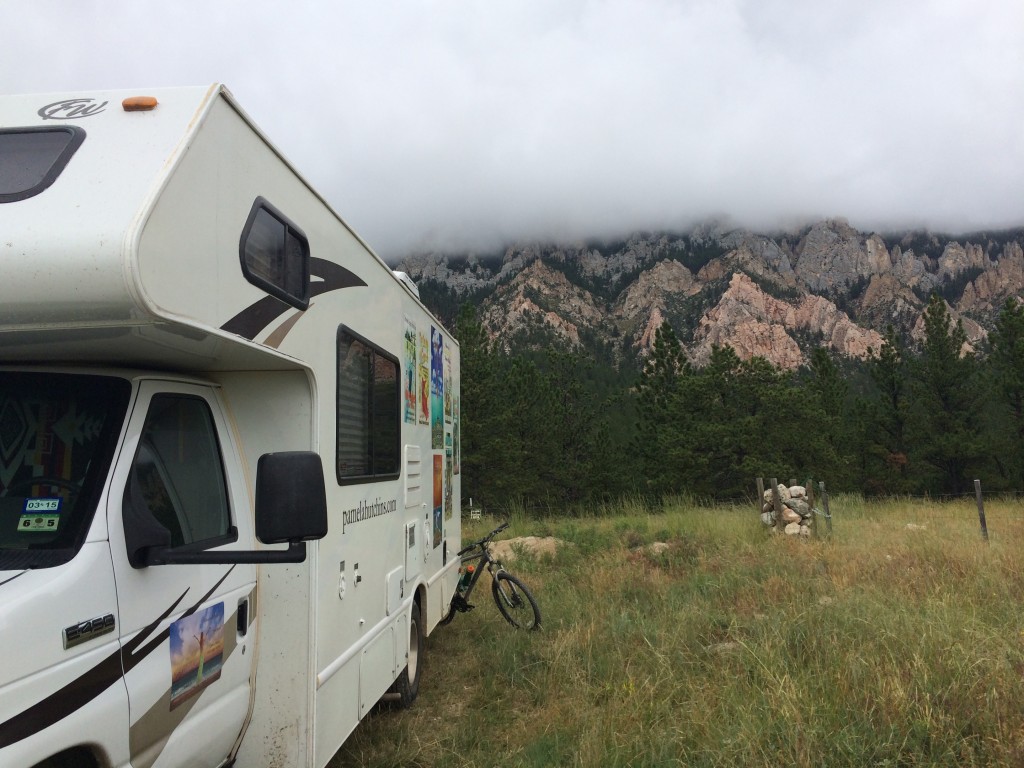 When we reached the bottom of the canyon, it emptied out immediately onto the plains. The smell is incredible. Sage, prairie grass, pine trees, and, on this day, rain. The mountains are socked in under clouds behind the Bookmobile. 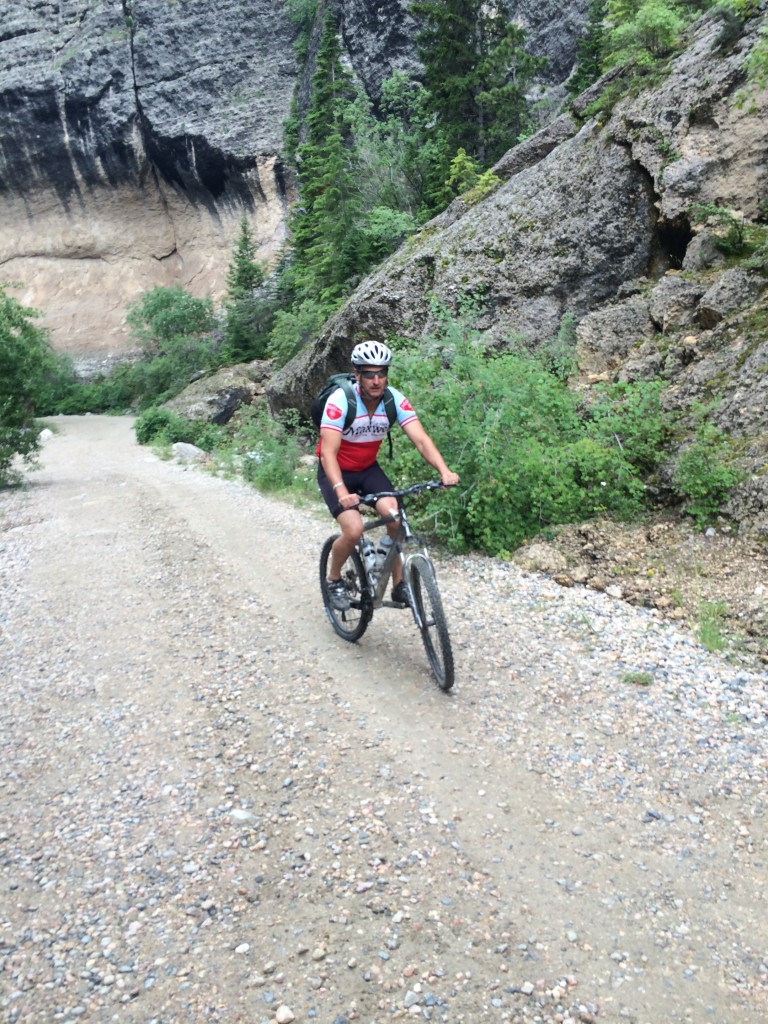 My father encouraged us to mountain bike up the road we had just come down. It was only seven miles up, but it was continuously steep. You know when my dad says that a ride is very hard that it is. Even coming down was hard in its own way. My hands ached from the tight grip I had to maintain on the breaks, although I didm’t have to pedal, not even once. 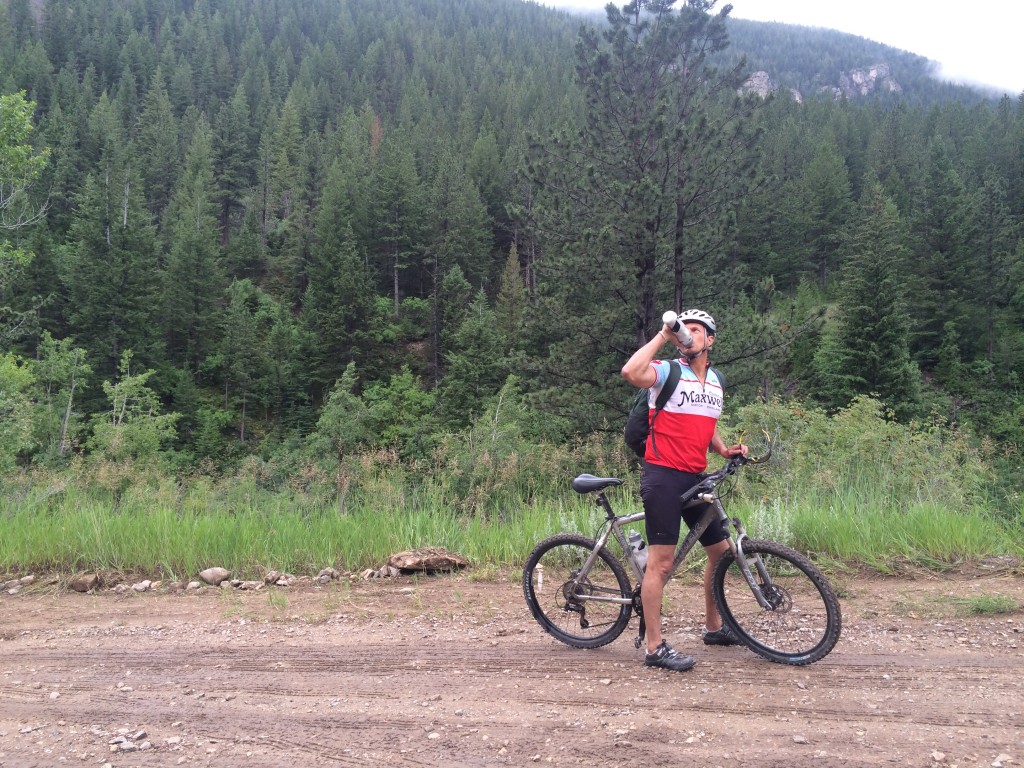 Lots of water breaks. The clouds are covering the mountain top behind Eric. This is moose and mountain lion country, but we didn’t see either. We saw some big beautiful mule deer and squirrels and chipmunks, though. 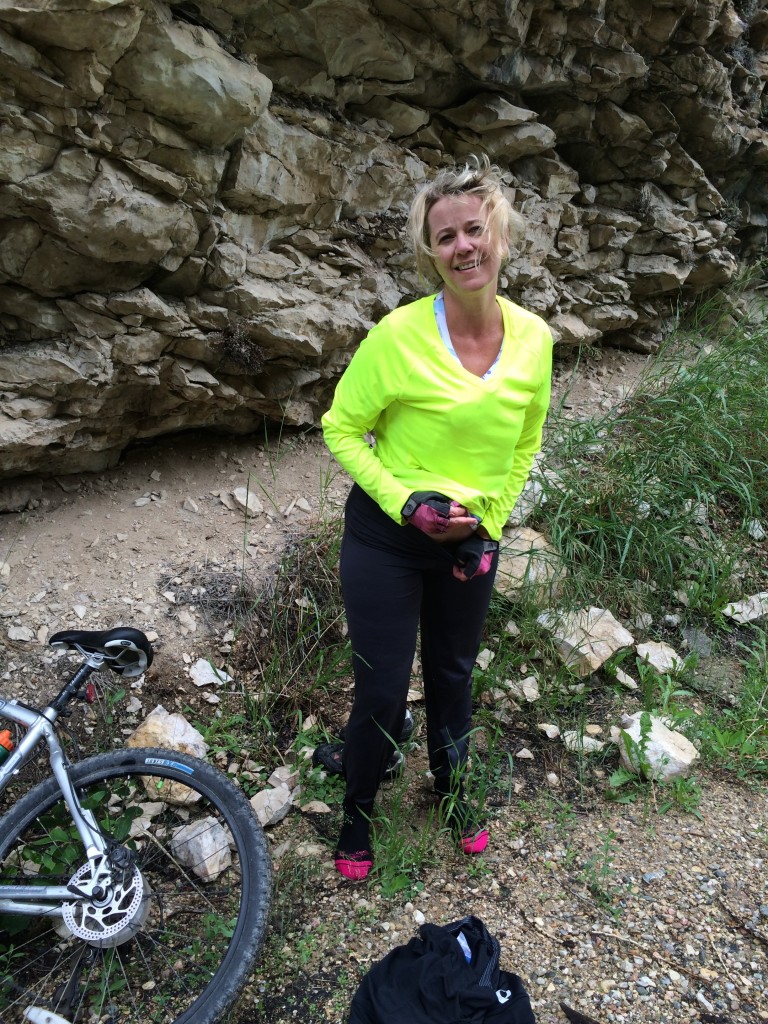 I am famous for getting too hot and too cold very quickly. Eric wasn’t fast enough to catch me changing into my pants when it got too cold for me. (I changed four times in 12 miles ;-)) 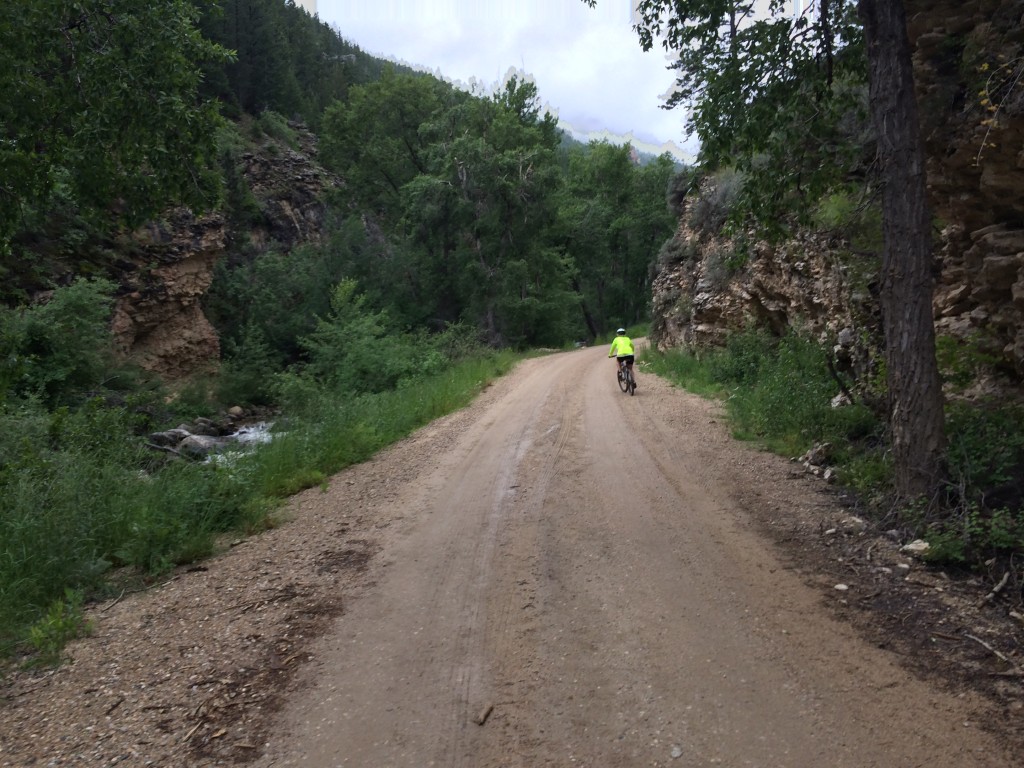 Photographic evidence of me riding uphill. Eric was usually closer to me, but he wanted to get a picture. I made him promise it would be far enough away not to emphasize the size of my tush. This is not the steep part. About one mile from the top, it was too much for me. I’ve been writing books, not riding bicycles the last few years. So we turned around at mile six. Eric could have kept going, no problem.

Despite what some of you might think, this canyon was called Crazy Woman Canyon long before I entered it. Eric thinks it was named after a middle-aged woman who forgot to take her progesterone. I think he has a death wish.

While we didn’t do an event on this day, I think we did some effective branding with the wildlife. I know they’ll be downloading free copies of Saving Grace soon.

This day was so perfect (and the day before as well) that my husband wanted to go visit a realtor on our way out of town, to see about getting some mountain property for a cabin–which he suggested we could build ourselves. Ha! We’ll see about that. We ran out of time, but he was smitten with the place, at least the summer version. The town of Buffalo only has 95-frost free days per year. Eric’s vision is that we get a stock trailer and move our fussy animals (aka show cows, and my someday-horse) with us and summer in the Bighorns. Someday, anyway. First we have to build a house in Nowheresville to live in the rest of the time.

On our way back toward Buffalo, a man driving a big Wyoming truck waved us over.

“I’m looking for the Fagan’s daughter. Has anyone seen her?” he asked, eyes twinkling.

Ha! You’re not exactly incognito when you’re cruising in the Bookmobile. Who’d’a thunk it? 😉

It turned out that he was none other than my parents’ friend and summer landlord, Mike, and husband of Mary, the woman I’d fallen in love with at the library the day before. Wyoming is not very populated, so the odds that anyone you run across will be someone you know are rather good. We turned around and followed him back to their gorgeous place and had a nice visit. He promised if we’d come back someday he’d bring 50 friends to my book event. Mary warned us not to pet her dog, a very protective Sharpei who sniffed our ankles and decided not to eat us.

While we were bicycling Crazy Woman, I got a message from my third grade teacher, who lived in Sheridan, one hour the wrong direction from our route that evening to Rapid City. She asked if we could do dinner. I was shocked she even remembered me, but one reader remembers another, it turned out. We quickly calculated that would get us into our park between 1 and 2 am.

So we drove back to Sheridan, and I got to hug and thank the woman who first planted it in my head that I was going to be a writer, that I could write, that I was a writer. She was my favorite teacher, and I had a lovely time getting to know her as a person instead of as my teacher. We reminisced about the old library. I told her about the times I walked from our house two miles away to bring in my stack of seven books (the library limit) to exchange, and how I still loved the scent of mildew and dust from the basement of that old building. She told us that when it moved locations half a block away, they formed a human chain and passed the books hand to hand for hour after hour.  We gave her some of my books, and pointed out where I had mentioned her in one of them.

And we forgot to take a picture.

Nevertheless, the moment is etched in my mind. I got to tell the woman that saw me–like all good teachers do, as the person I would become and not just as the scraggly-haired little book worm I was then–just what she had meant to me, and to the books that I had always known I could write, because she said so.