Redneck Writer Road Report #18: Who’s the One With the Mustache? 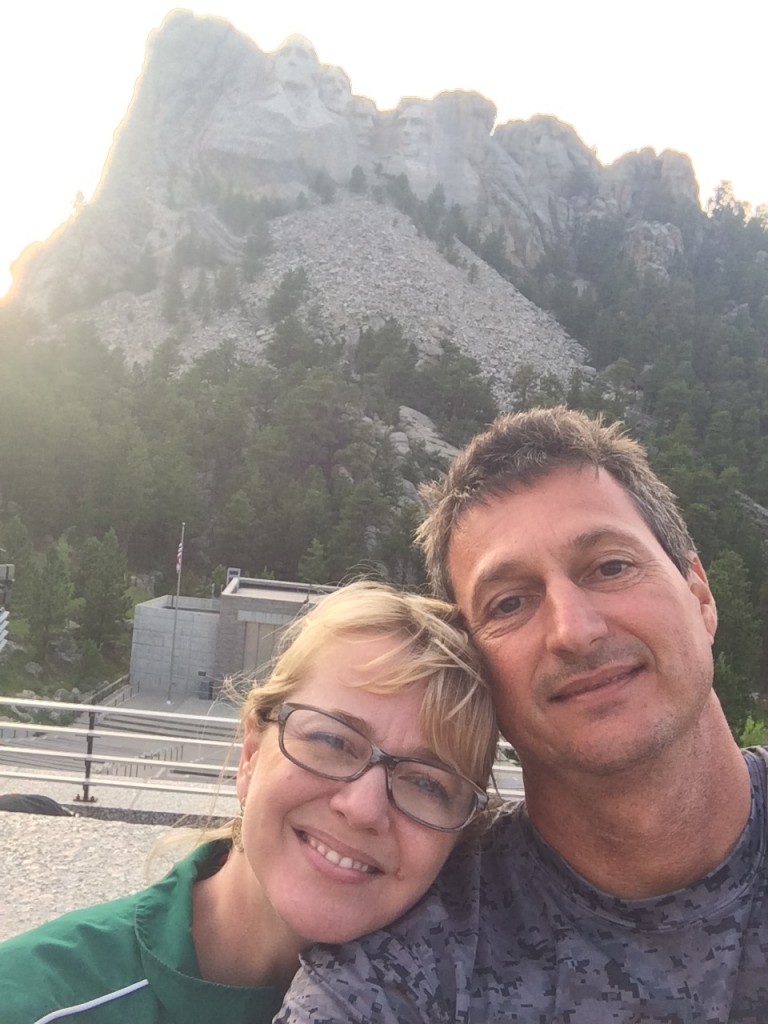 Some days you’re the windshield, and some days you’re the bug. On this day, I was the bug. Migraine meltdown. I’d like to think it was random, but we ate out the night before after 20 days on our cleanse with shakes and no chemicals, sugar, gluten, yeast, etc. Oops. I was a bad girl and I paid for it.

Thus the only thing I remember about our drive to South Dakota was opening the Bookmobile’s back window to blast cold air on my face so I wouldn’t throw up. The next day was a curtains-drawn, talk-in-whispers work day. That’s OK. I needed some time to catch up on a myriad of little things that had piled up.

And Eric needed time to work on the Bookmobile. It’s just not a road trip until the Bookmobile starts to come apart. The day before, at Crazy Woman Canyon, the side door inexplicably quit opening. We can still get in and out of the cab doors, but that’s not overly convenient when you’re carrying trash or groceries. Also, a part had broken in our shower and started pouring water into the wood framed interior walls behind it. Not good.

Many hours later, Eric had learned he had neither the tool nor the parts he needed to fix either problem and no mobile RV mechanic was available. Rats. Well, we only have a week to go, and our parks all have showers.

Thanks to drugs, quiet, darkness, and progesterone, we were able to prop me up enough to paste my smile on and make it out for the event. In fact, this was a great event. The RV Park (Rushmore Shadows: next to a ginormous petting zoo, across from Sitting Bull’s Crystal Caverns, and just down the road from Rapid City’s Reptile Gardens) had put fliers in the packets of all the people checking in for the last few weeks, and they’d made their own posters and put them EVERYWHERE. So we had a steady crowd, including the absolutely wonderful staff, who took turns manning the desk so that they could join us under the Picnic Pavilion, where the cool breeze was magnificent. Really, it would have been a home run if no one had showed, just thanks to all the exposure and “impressions” we got here. As a bonus we met a wonderful couple making their way Eastward on a battlegrounds/history trip, another who was celebrating the husband’s 31-years sober, a couple riding their motorcycles over to Sturgis for the big motorcycle rally, and one who had a daughter who had just become a stepmom to some tween girls. And many more. It was fun.

We finished early enough to head over to Mount Rushmore. OK, I have a confession: I love monuments, art, and crazy feats, but something in me chafes at carvings on the face of an already perfect mountainside. Yes, I know, I have granite countertops, and many natural products in my home that had to come from somewhere. But I kept thinking about the nearby Wounded Knee massacre site, and the majesty of nature that had made our trip spectacular so far, and I wondered if this monument was the best legacy for the area. Or whether they should have included a Sioux chief. Go ahead, throw your rotten tomatoes.

The countryside was gorgeous. Far prettier than we’d expected. The black stone that gives the area its name–Black Hills–was a stunning contrast to the colors we’d seen in the last few weeks. Mule deer grazed in waist-high, waving grass, and the flora almost exploded with vibrancy and health.

Then we came to Keystone.

Keystone was a Las Vegas-like Old West Caricature, garish and commercial. It is also right in the middle of the mountains, at the entry to the National Park. So if you want to do zipline or Mountain trams after you watch the Jordan Brothers “live performance chainsaw art” and just before you visit the Wax Museum of Presidents and get your picture made while waiting for a pizza dinner, this is your kind of place. Our kids would have loved it and screamed to stop at every over-priced attraction, a few years back. Your family may have had a fabulous vacation there. If so, that makes me happy. It’s just not my thing, and it fed into my fears  that Mount Rushmore would be gimmicky. Tourist-y. Tacky.

We pushed on. As we caught site of the Memorial, I realized it was smaller than I expected. We parked outside a multi-story parking garage and walked in past the “Jefferson” ice cream stand, which touted him as the architect of the Declaration of Independence and the source of the first recipe for ice cream in the United States (???). We got our first good look at the faces of our past Presidents, and we had a horrible–and mutual–realization.

Neither of us knew who the guy with the mustache was.

“This is kind of embarrassing,” I said.

Eric nodded. “It’s not like we can just ask someone.”

We searched for ten minutes in vain. There were no signs identifying the mystery mustached man.

I texted my son Clark Kent, who knows everything. “Who’s the guy with the mustache on Mount Rushmore?”

His replied instantly, a rarity with him. “Jim Harbaugh.” (Coach of the San Francisco 49ers NFL football team.)

We laughed. In character for Clark, but not helpful.

“What do we do?” I asked. I had started feeling guilty, and, yes, I’ll admit it, I was moved by the faces carved in the stone, and their importance in all of our lives, not just in the U.S., but most especially here. Some bad things had been done, as they are in any country, things that shaped our future, things we can regret and learn from, but never change. Like Wounded Knee. But other things, amazing things, had also been done, things made possible by these men, one of whom had a mustache and looked familiar, but damned if we could figure out who he was.

Eric pointed to some stairs. “Let’s see what’s down there.”

Thankfully, what was down there was a lovely room filled with explanatory displays, including one about Theodore Roosevelt and why sculptor Gutzon Borglum had included him in his vision. Roosevelt (who once ranched in the South Dakota Badlands, by the way) had started the U.S. Forest Service and made the Panama Canal possible, which completed Christopher Columbus’ dream of an East-West trade route and set the US up to become a super power, economically speaking.

What a relief to know who he was, and learn about his role in the conservation of natural resources and decisions that paved the way for much of our National Park system today. A perfect cap on my conversion.

All in all, if it hadn’t been for Keystone and all the excess between it and Rapid City, it would have been perfect, and I left persuaded that Mount Rushmore was awesome and wonderful.

That night I mapped our library stops for the next day’s drive through South Dakota, North Dakota, and into Minnesota while Eric prepared the library packets.

And we ended the evening looking at land for sale in Buffalo, Wyoming.

p.s. I don’t want to point any fingers this time, but there are no pictures of our event in Rapid City. 🙂