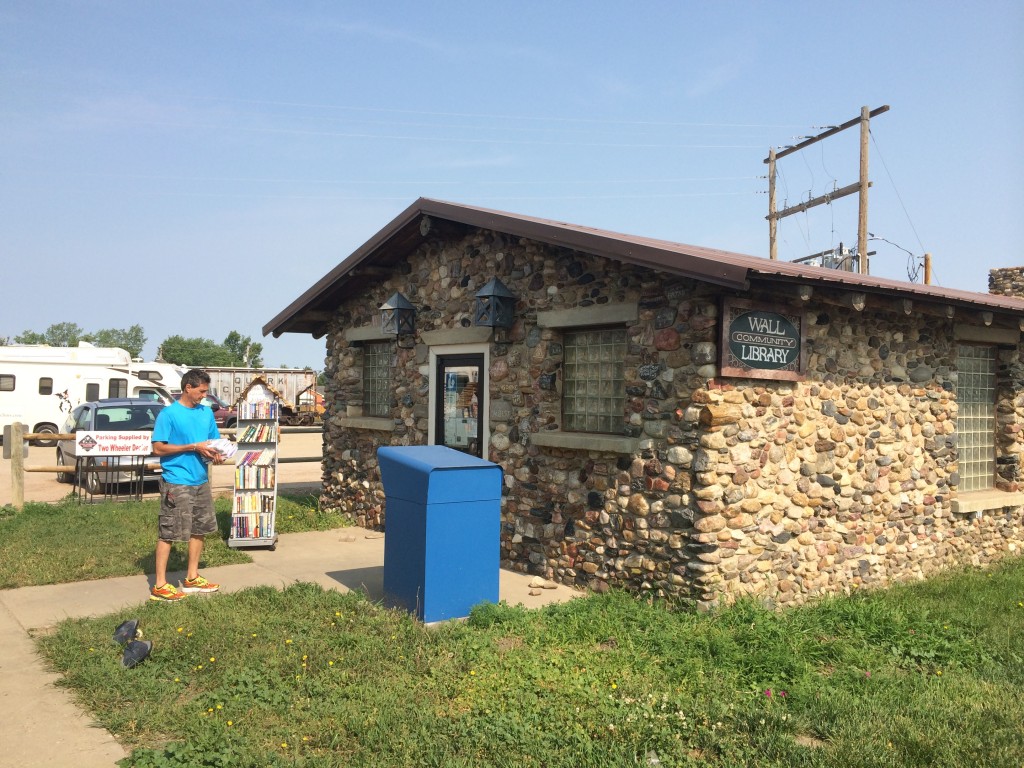 To break up our ten-hour drive (and increase it to twelve) we planned seven library drops on our journey from Rapid City, South Dakota, through North Dakota, and on to Otter Tail Lake, Minnesota. Drop #1 was in Wall, SD, famous for the Wall Drug Store, home of free ice water and five cent coffee. 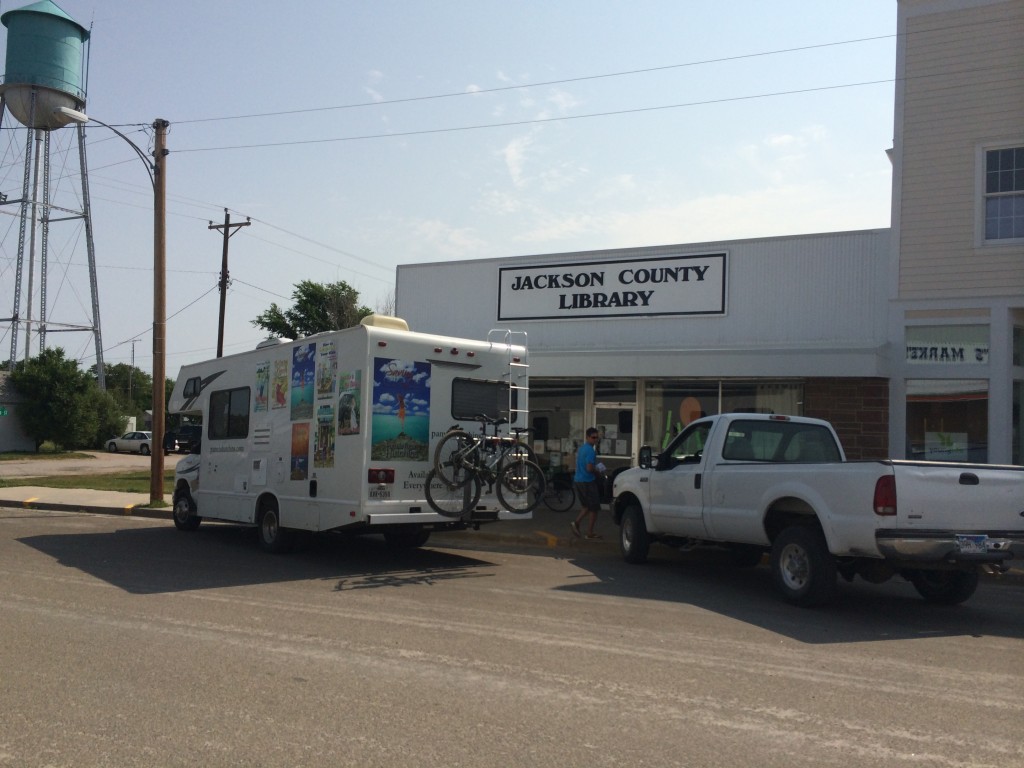 Stop #2 in Kadoka, SD, and the 1st time Siri let us down on directions. This library had “Save Your Library” signs up, so we were especially happen to donate to them. 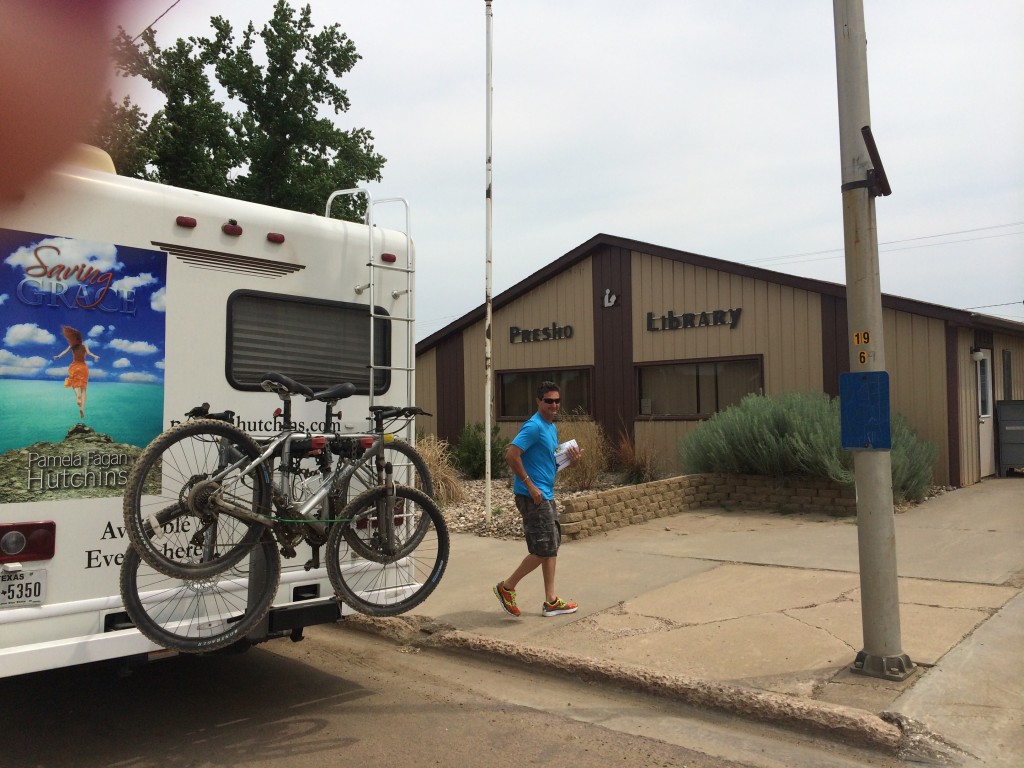 Wrong again Siri! But we found the Presho Library anyway, even when she took us to the wrong location down a succession of dirt roads. Bad Siri. 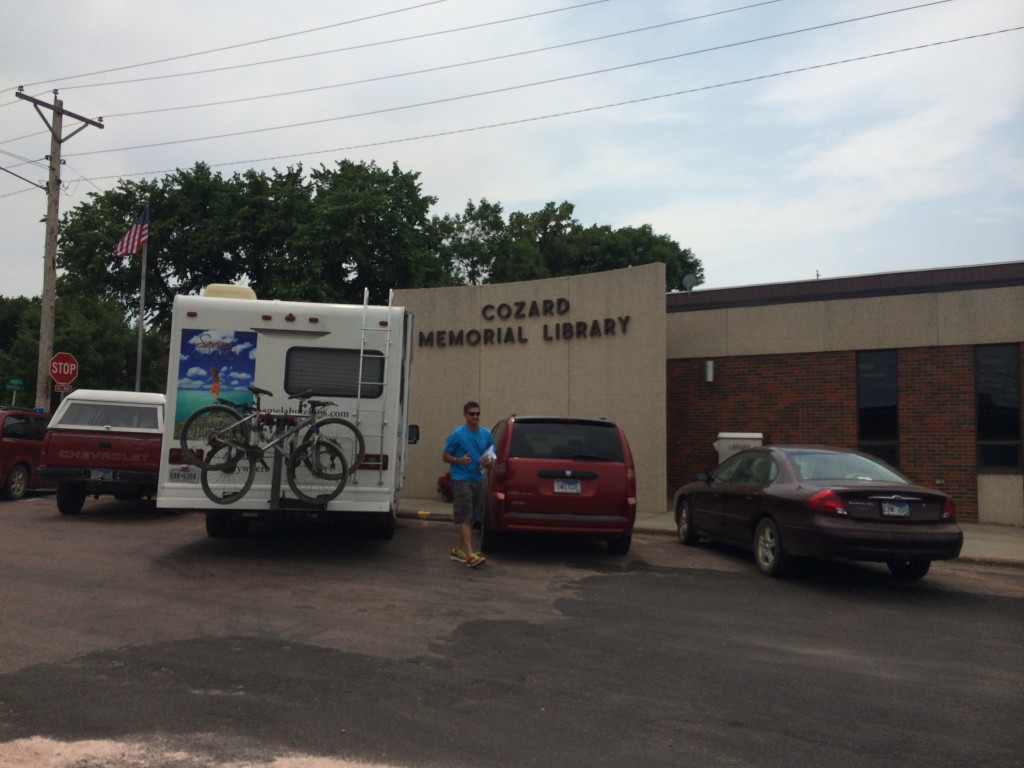 We didn’t need no stinkin’ Siri to find the Cozard Memorial Library in Chamberlain SD. 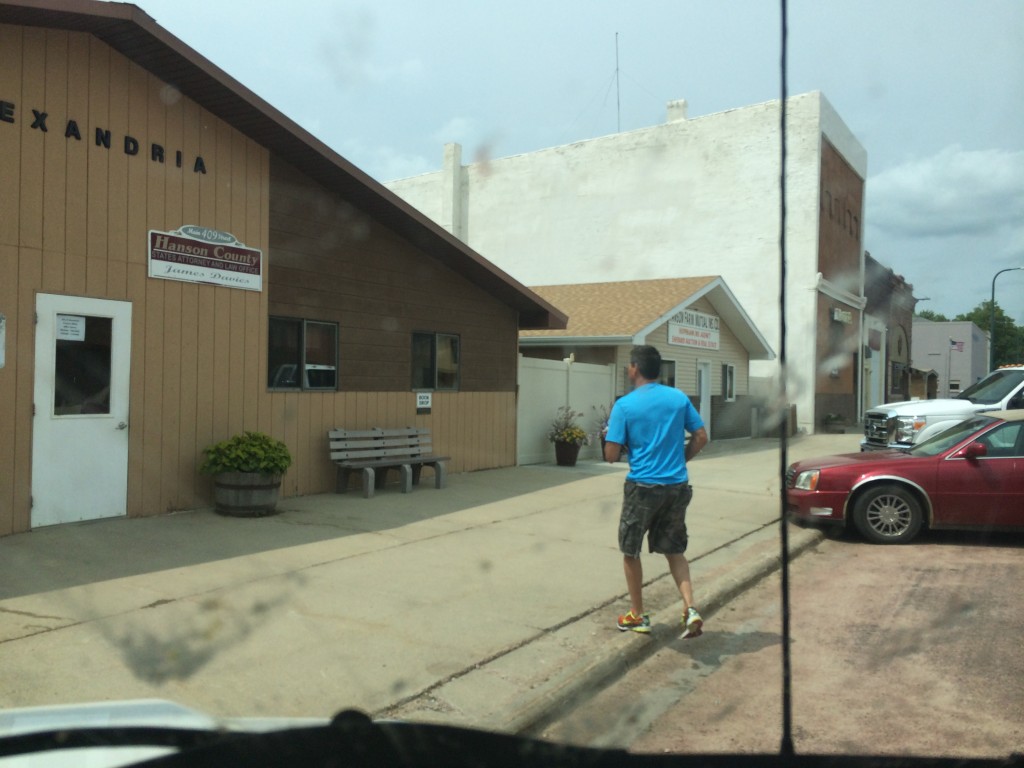 Siri told us this was where the Alexandria, SD library was. She was wrong. Surprise! 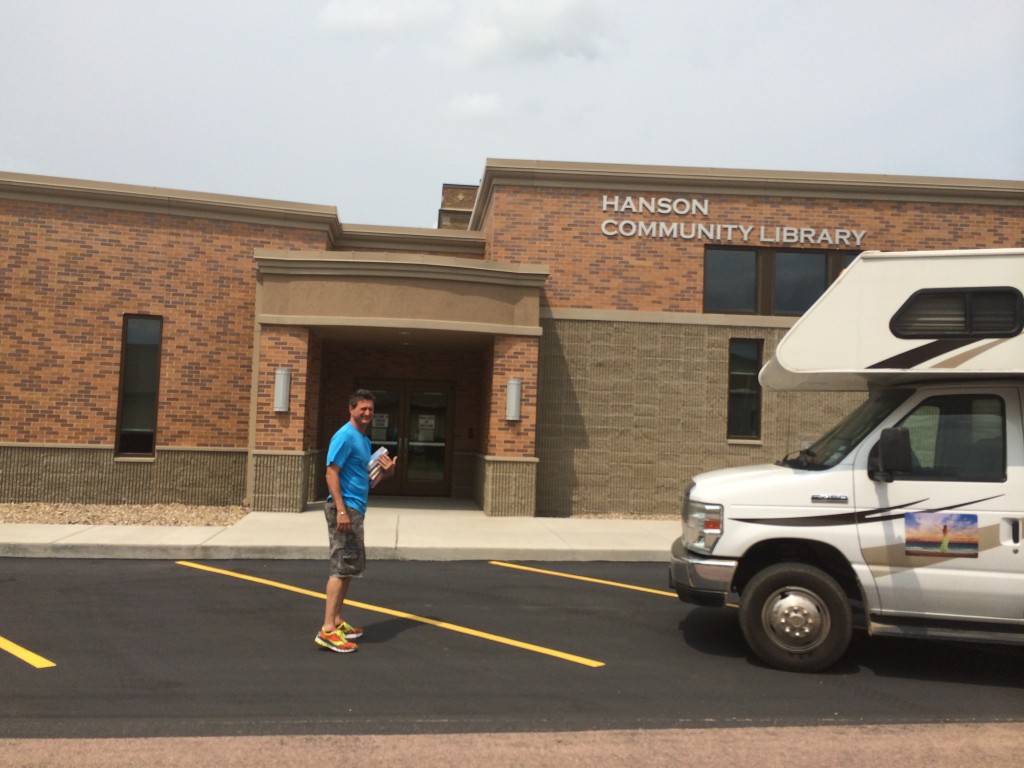 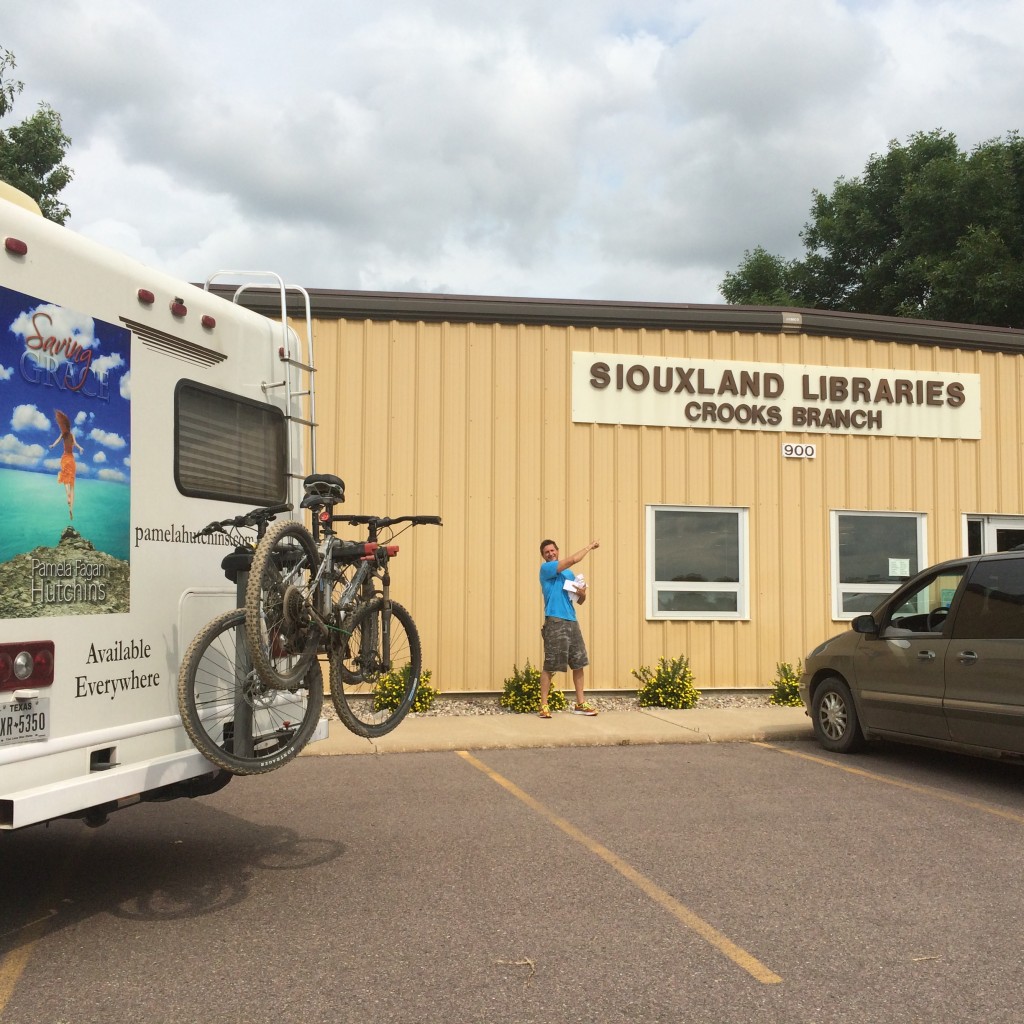 It took a local to point us toward the Siouxland Libraries Crooks branch in Crooks, SD, because Siri took us to the middle of a cornfield. Even when she hadn’t the slightest clue, she remained bossy. 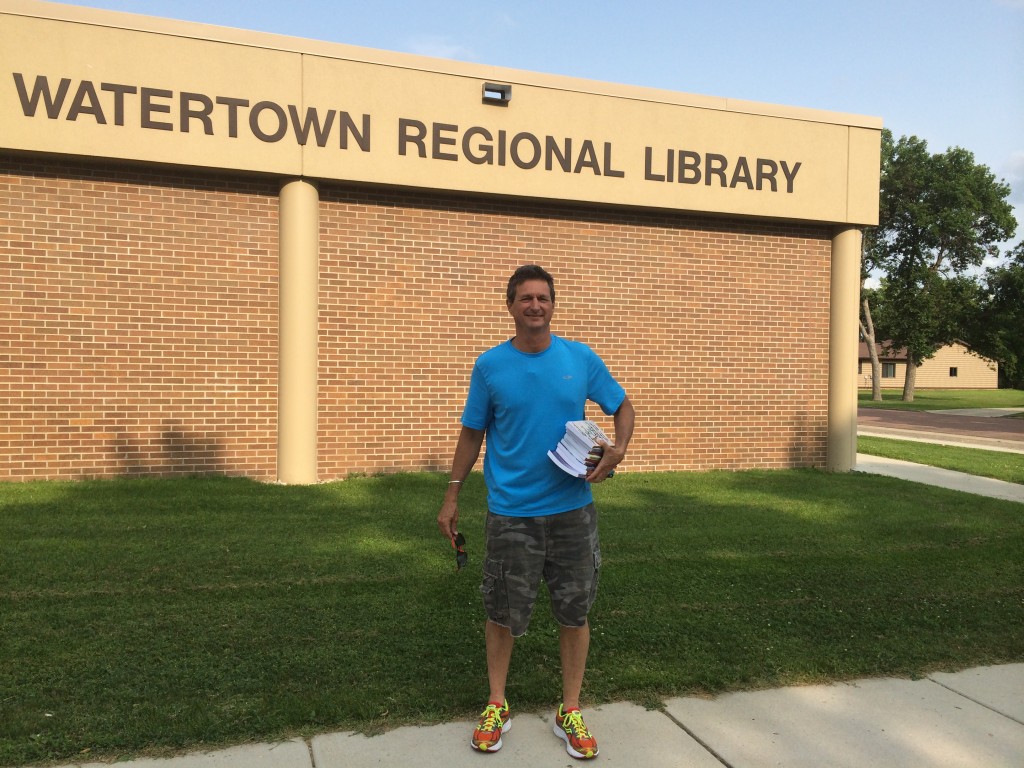 Finally, Siri got one right in Watertown, SD. 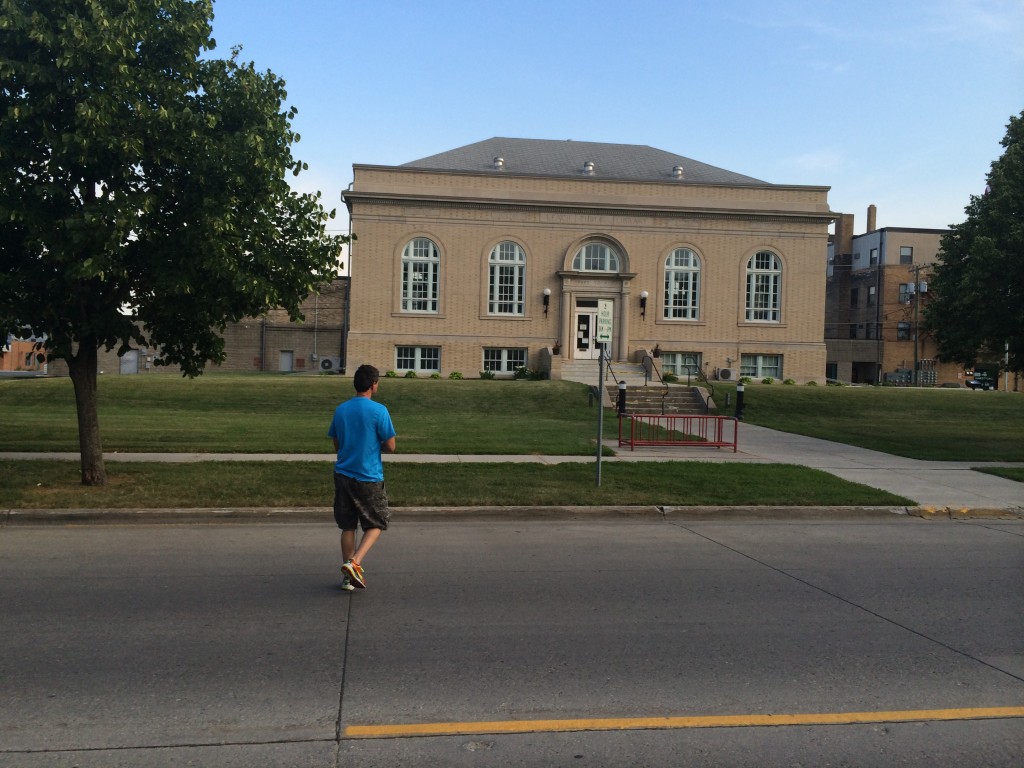 Our resounding conclusion about South Dakota, other than that Siri didn’t know squat about it, was that it was windy. Like plant some trees and huddle the cows windy. The Bookmobile got buffeted around like a prairie schooner at full sail, and a few times Eric’s knuckles turned white. I may or may not have helpfully squeaked out some advice at those times. Well do I remember driving the Bookmobile during the 60-Cities-in-60-Days book tour from San Diego to Houston, through the Laguna Mountains, Arizona, New Mexico, and Far Far West Texas, with only Susanne to calm my nerves as we were blown from one side of the road to the other.

We had a first on this drive: the Crooks (love the name of that town) library turned down our gift. The very, very young woman working the front desk said she wasn’t allowed to take donations. Their loss ;-); we donated them to Wahpeton, ND instead.

Other than Crooks, we came away as always overwhelmed with the gratitude from the small town libraries and a sense of how challenging it is for them with no budget to get new material to keep their community engaged with them. It makes Eric feel like Santa Claus.

Eric had fun on the drive. In Presho, Eric spied Hutch’s hotel, which sparked a memory of his old Hutch’s Skateboard Company, which he founded when he was 12 years old. In Crooks, he took another trip down memory lane when he spied a hydroplane identical to the one built from a kit by his Maine neighbor 40+ years ago. The owner of this relic described in detail his plans to paint it with a flame burst and mount a thirty-horse Johnson short shaft engine on it, much to the amusement of his teenage son. 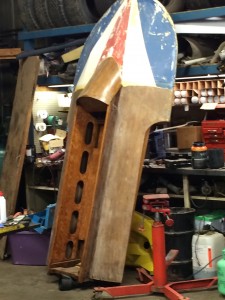 We arrived at Otter Tail at the home of some more dear family friends after dark. Our last official event would be the next morning at City Bakery in Fergus Falls, so we’d get to see the area then. After three weeks of book events and libraries, the Bookmobile is feeling pretty light on her feet, and our gas mileage is noticeably better. All in all, we’ll have planted over 1000 seeds on this journey.

Meanwhile, with our final northern location in sight, you’ll never guess what Eric and I talked about? Another book tour. This one on bicycle, across the U.S. Yes, we have to work out the logistics (and get my ass back in shape), but look for us lumbering by on a backroad near you in the Summer of 2016.

p.s. Does anyone notice the difference when I’m photographing Eric versus him, me?

p.p.s. For those concerned, yes, he does occasionally wash those camo shirts that are in nearly every picture on this trip. He wanted me to say he had seven pair, but I cannot tell a lie.